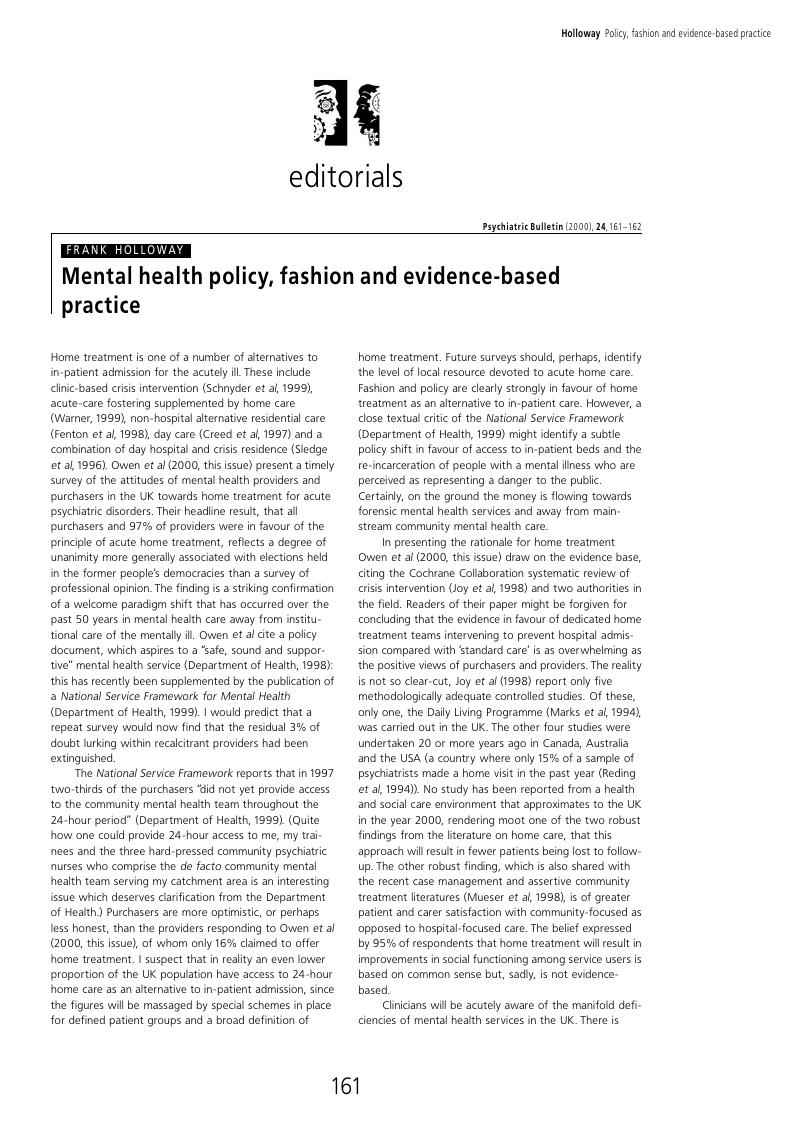 An abstract is not available for this content so a preview has been provided. To view the full text please use the links above to select your preferred format.
Type
Editorials
Information
Psychiatric Bulletin , Volume 24 , Issue 5 , May 2000 , pp. 161 - 162
DOI: https://doi.org/10.1192/pb.24.5.161[Opens in a new window]
Creative Commons
This is an Open Access article, distributed under the terms of the Creative Commons Attribution (CC-BY) license (http://creativecommons.org/licenses/by/4.0/), which permits unrestricted re-use, distribution, and reproduction in any medium, provided the original work is properly cited.
Copyright
Copyright © Royal College of Psychiatrists, 2000

Home treatment is one of a number of alternatives to in-patient admission for the acutely ill. These include clinic-based crisis intervention (Reference Schynder, Klinghofer and LeutholdSchnyder et al, 1999), acute-care fostering supplemented by home care (Reference WarnerWarner, 1999), non-hospital alternative residential care (Reference Fenton, Mosher and HerrellFenton et al, 1998), day care (Reference Creed, Mbaya and LancahireCreed et al, 1997) and a combination of day hospital and crisis residence (Reference Sledge, Tebes and RakfeldtSledge et al, 1996). Owen et al (Reference Owen, Sashidharan and Edwards2000, this issue) present a timely survey of the attitudes of mental health providers and purchasers in the UK towards home treatment for acute psychiatric disorders. Their headline result, that all purchasers and 97% of providers were in favour of the principle of acute home treatment, reflects a degree of unanimity more generally associated with elections held in the former people's democracies than a survey of professional opinion. The finding is a striking confirmation of a welcome paradigm shift that has occurred over the past 50 years in mental health care away from institutional care of the mentally ill. Owen et al cite a policy document, which aspires to a “safe, sound and supportive” mental health service (Department of Health, 1998): this has recently been supplemented by the publication of a National Service Framework for Mental Health (Department of Health, 1999). I would predict that a repeat survey would now find that the residual 3% of doubt lurking within recalcitrant providers had been extinguished.

The National Service Framework reports that in 1997 two-thirds of the purchasers “did not yet provide access to the community mental health team throughout the 24-hour period” (Department of Health, 1999). (Quite how one could provide 24-hour access to me, my trainees and the three hard-pressed community psychiatric nurses who comprise the de facto community mental health team serving my catchment area is an interesting issue which deserves clarification from the Department of Health.) Purchasers are more optimistic, or perhaps less honest, than the providers responding to Owen et al (Reference Owen, Sashidharan and Edwards2000, this issue), of whom only 16% claimed to offer home treatment. I suspect that in reality an even lower proportion of the UK population have access to 24-hour home care as an alternative to in-patient admission, since the figures will be massaged by special schemes in place for defined patient groups and a broad definition of home treatment. Future surveys should, perhaps, identify the level of local resource devoted to acute home care. Fashion and policy are clearly strongly in favour of home treatment as an alternative to in-patient care. However, a close textual critic of the National Service Framework (Department of Health, 1999) might identify a subtle policy shift in favour of access to in-patient beds and the re-incarceration of people with a mental illness who are perceived as representing a danger to the public. Certainly, on the ground the money is flowing towards forensic mental health services and away from mainstream community mental health care.

In presenting the rationale for home treatment Owen et al (Reference Owen, Sashidharan and Edwards2000, this issue) draw on the evidence base, citing the Cochrane Collaboration systematic review of crisis intervention (Reference Joy, Adams and RiceJoy et al, 1998) and two authorities in the field. Readers of their paper might be forgiven for concluding that the evidence in favour of dedicated home treatment teams intervening to prevent hospital admission compared with ‘standard care’ is as overwhelming as the positive views of purchasers and providers. The reality is not so clear-cut, Joy et al (Reference Joy, Adams and Rice1998) report only five methodologically adequate controlled studies. Of these, only one, the Daily Living Programme (Reference Marks, Connolly and MuijenMarks et al, 1994), was carried out in the UK. The other four studies were undertaken 20 or more years ago in Canada, Australia and the USA (a country where only 15% of a sample of psychiatrists made a home visit in the past year (Reference Reding, Raphelson and MontgomeryReding et al, 1994)). No study has been reported from a health and social care environment that approximates to the UK in the year 2000, rendering moot one of the two robust findings from the literature on home care, that this approach will result in fewer patients being lost to follow-up. The other robust finding, which is also shared with the recent case management and assertive community treatment literatures (Reference Mueser, Bond and DrakeMueser et al, 1998), is of greater patient and carer satisfaction with community-focused as opposed to hospital-focused care. The belief expressed by 95% of respondents that home treatment will result in improvements in social functioning among service users is based on common sense but, sadly, is not evidence-based.

Clinicians will be acutely aware of the manifold deficiencies of mental health services in the UK. There is overwhelming anecdotal evidence that users and carers find access to mental health services at times of crisis difficult (see, for example, Reference Rogers, Pilgrim and LaceyRogers et al, 1993). Of even greater concern is the fact that the duration of untreated psychosis prior to first presentation to mental health services is often long (Reference Lincoln, McGorry, McGorry and JacksonLincoln & McGorry, 1999) and time to treatment of severe non-psychotic disorders, such as obsessive-compulsive disorder is even longer. Pathways to mental health care, particularly in inner cities, often involve the criminal justice system or unnecessarily dramatic presentations to accident and emergency departments (Reference Burnett, Mallett and BhugraBurnett et al, 1999). There is a crisis in the recruitment and retention of professionals of all disciplines. Patients and carers lack timely access to the whole range of evidence-based treatments for mental illness, particularly those that require professional time and expertise. Case loads for community mental health staff are, in general, so high as to render detailed psychosocial assessment and assertive community support difficult, if not impossible.

Given the daunting problems facing mental health services where should energy and investment go? Despite its attractions, out-of-hours home-based crisis intervention is logically a rather poor choice for mainstream purchasers and providers, given the chronic and recurrent nature of severe mental illness. The evidence base in its favour is not strong, even against the poor quality forms of ‘standard care’ available 20 years ago or more. In the absence of a reasonable body of methodologically sound research favouring crisis intervention, improving the timely accessibility to care of people with severe treatable mental illnesses should be a high priority. There is a clear need for adequate community-based treatment and support for people with an established mental illness, which requires further investment in the staffing and training of the local community mental health team. Well resourced teams could then perhaps devote adequate attention to interventions targeted at relapse prevention and relapse planning, using new technologies such as the crisis card (Reference Sutherby, Szmukler and HalpernSutherby et al, 1999).