This study looked at patient aggressive behaviour on an Irish psychiatric intensive care unit, and whether it was related to diagnosis, patient's insight and symptomatology. Each aggressive incident was recorded throughout the patient's stay using the Staff-Observed Aggression Scale.

Ninety-nine individuals were admitted to the unit during the study. We recorded 82 aggressive incidents, with most occurring during the daytime and on weekdays. There was no statistical difference in BPRS scores between the aggressive and non-aggressive groups. the aggressive patient group had a lower insight score than the non-aggressive group (P < 0.05) as measured on the Schedule of the Assessment of Insight. However, when gender and verbal aggression only were included in the analysis, the difference in insight was less significant (P=0.07).

Aggression is common on a psychiatric intensive care unit. Low levels of insight in patients may increase the risk of aggression.

Violence and aggression are major factors affecting morale of psychiatric in- and out-patients and staff, with most of the violent acts being perpetrated by individuals with schizophrenia (Reference Rossi, Jacobs and MonteleoneRossi et al, 1985; Reference Tardiff, Marzuk and LeonTardiff et al, 1997). Established risk factors for assault in this subgroup include a history of violence (Tardiff et al, 2007) and comorbid substance misuse (Reference Swanson, Holzer and GanjuSwanson et al, 1990). More recent studies suggest a need for special education (Reference Walsh, Gilvarry and SameleWalsh et al, 2004) and involuntary admission (Reference Foley, Kelly and ClarkeFoley et al, 2005) can also contribute. Staff characteristics (age, length of work experience, training programme in assault prevention and management, frequent changes in staff and use of temporary staff) can also be a factor in patients’ assaultive behaviour (Reference James, Fineberg and ShahJames et al, 1990; Reference Chou, Lu and MaoChou et al, 2002). An Italian audit showed that approximately half of all aggressive incidents on a psychiatric intensive care unit had no specific cause, occurred during daytime and in the first week of admission and, in most cases, were directed towards staff, other in-patients and visitors (Reference Grassi, Peron and MarangoniGrassi et al, 2001).

Individuals with schizophrenia who commit violent acts have deficits of insight, including insight into their illness and awareness of the legal implications of their behaviour (Reference Buckley, Hrouda and FriedmanBuckley et al, 2004). The relationship between lack of insight and illness in such individuals is important, but under-researched.

Psychiatric intensive care is for in-patients compulsorily detained, usually in secure units, who are in an acutely disturbed phase of a serious mental disorder. The loss of capacity for self-control, which increases risk, does not allow for safe treatment on an open general ward. Length of stay on an intensive care ward would not ordinarily exceed 8 weeks (Department of Health, 2002). Although factors related to in-patient aggression have been extensively studied, there is little specific information about violence in psychiatric intensive care units (Saverimuttu et al, 2000). Research on the prevalence and causes of in-patient aggression in general has been hindered by the use of different methods for measuring aggression (Reference Nijman, Allertz and MerckelbachNijman et al, 1997). Many studies have focused on specific groups of in-patients, such as forensic or first episode psychosis subgroups. Insight assessment of violent in-patients so far has also been completed largely on forensic in-patients only. We prospectively assessed the incidence, insight and clinical correlates of all individuals, irrespective of diagnosis, admitted to a psychiatric intensive care unit over a 10-week period.

The study was carried out on the 18-bed psychiatric intensive care unit at St John of God Hospital, Stillorgan, Dublin county. The hospital is an in-patient psychiatric facility which accepts admissions from all over Ireland, but in-patients mainly come from a predominantly urban, geographically defined catchment area of approximately 165 000 people. All individuals admitted or transferred to the psychiatric intensive care unit from other wards were included in the study. Once the person was discharged or transferred to a different ward after their stay in the unit, they were no longer considered to be part of the study. Ninety-nine patients were admitted to the unit during this time. Average bed occupancy for the duration of the study was 95%. Six nurses staff the unit during the day and five nurses at night, with a male/female ratio of 2:3. However, one-to-one special nursing was occasionally employed in the unit for patients requiring a higher level of observation and care.

On admission to the unit, the Brief Psychiatric Rating Scale (BPRS; Overall et al, 1962) and Schedule for the Assessment of Insight (SAI; Reference DavidDavid, 1990) were completed on each individual by the doctor on duty, and biographical data such as age, gender, marital status and previous admissions were recorded. The five BPRS subscales (hostile/suspiciousness, anxious/depressed, withdrawn/retarded, agitated/excited, thinking disturbance) were also used in the analysis. The SAI examines insight for illness, treatment and psychotic phenomena. As many individuals were not psychotic, insight scores were only examined for illness and treatment.

Each verbal and non-verbal aggressive incident was recorded throughout the person's stay by nursing staff using the Staff-Observed Aggression Scale Revised (Nijman et al, Reference Nijman, Muris and Merckelbach1999, Reference Nijman, Palmstierna and Almvik2005). The scale measures verbal and physical aggression, including the target of the aggression, the consequences of the act on the target and measures taken to stop the aggression. Before the study commenced, all staff were trained in the use of these instruments and achieved appropriate levels of interrater reliability (Cronbach's α=0.69). All diagnoses were recorded using DSM-IV criteria by examination of case notes.

The study was approved by the St John of God Provincial Ethics Committee. Statistical analysis was performed using SPSS version 15.0 for Windows.

There is no significant difference in mean age by gender of all individuals admitted to the unit during the study (men, 39 years v. women, 41 years), but there were significantly more females than males in the group of the 50-59 year olds (Fig. 1). Regarding patient demographics, 65% were single, 11% separated or divorced and 24% married. Almost two out of five patients (41%) were unemployed, with 39% in full-time employment, 11% in full-time education and 9% working in the home. Various diagnostic categories for this patient group are shown in Table 1, along with the number and percentage of in-patients in each category who behaved aggressively.

Triggers for the aggression were often unclear, with no understandable provocation in 63% of aggressive incidents. Staff's denial of patient's requests was the next most common trigger at 21%, and 11% of incidents happened because the person was provoked by fellow patient(s). In 4% of incidents, the reason was staff requesting the patient to take medication. 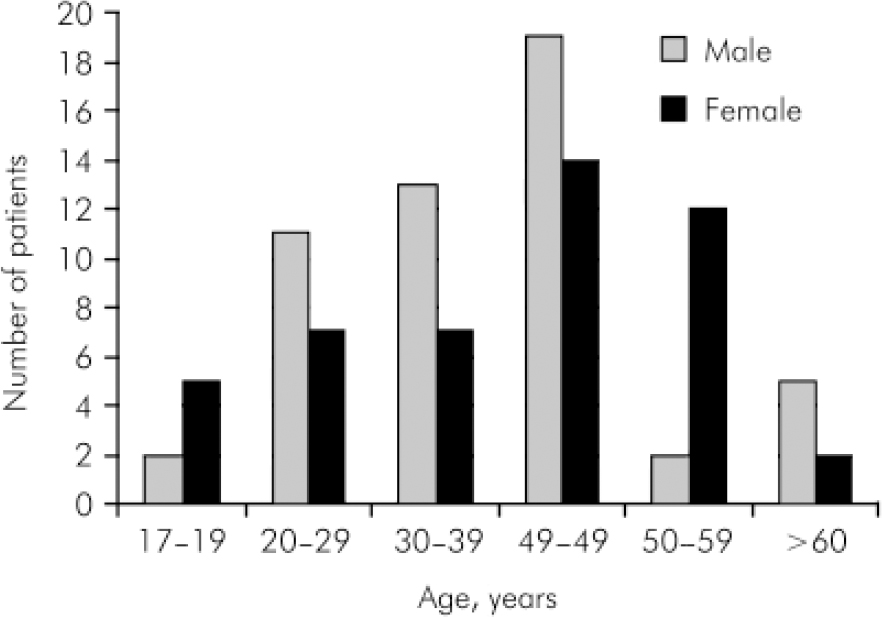 Clinical correlates of aggression with symptomatology and insight

For the purpose of analysis, patients were divided by gender into aggressive and non-aggressive groups. During their stay in the psychiatric intensive care unit, 26% of patients were aggressive and 74% were not. Initial statistical analysis revealed a significant difference between SAI levels of insight for illness and treatment in the two groups (maximum score 10 for no insight, 0 for full insight), with lower insight scores in the aggressive group (4.34 v. 6.11, P<0.05). Mean BPRS scores between these two groups (46.7 v. 43.8, P=0.35) were not statistically significant.

This study provides the first prospective review of in-patients in an Irish psychiatric intensive care unit. Patients on the unit were typically aged 40, likely to be single (65%) and unemployed (40%), with an even gender split. As in other studies on psychiatric in-patients’ aggressive behaviour (Reference Tardiff, Marzuk and LeonTardiff et al, 1997), most aggressive patients had a diagnosis of either schizophrenia or bipolar disorder.

Our study shows, in line with other studies (Reference Shah, Fineberg and JamesShah et al, 1991; Reference Nijman, Allertz and MerckelbachNijman et al, 1997), that aggression is common on a psychiatric intensive care unit and that the target is likely to be a member of staff (63%) or a fellow patient (36%). Many incidents involved multiple targets. Men were more likely than women to engage in physically aggressive behaviour. Few incidents resulted in injury with just 2% requiring minor treatment. This is consistent with other studies (Reference Steinert, Wiebe and GebhardtSteinert et al, 1999; Reference Foley, Kelly and ClarkeFoley et al, 2005). Aggressive incidents were more likely to occur on weekdays and during the day, possibly because the ward was busier at that time, resulting in a more disruptive environment for potentially volatile patients.

Admission criteria to a psychiatric intensive care unit commonly include:

Such criteria many account for patients unlikely to display aggression admitted to a psychiatric intensive care unit. Such low-risk patients may be exposed to assaults by a minority of aggressive patients. This study points clearly to that risk, given that 74% of patients did not display aggressive behaviour, yet the target of aggression in 36% of incidents were other patients.

Literature on insight deficits remains sparse (Reference Buckley, Hrouda and FriedmanBuckley et al, 2004). Previous studies have focused exclusively on individuals with schizophrenia. This is the first study which has looked at insight in a general group of patients while looking at aggression and showed acceptable levels of interrater reliability (Cronbach's α=0.69). Insight deficits prevailed in the physically aggressive group, which suggests that they may be predictive of aggression. Further work may reveal insight deficits in aggressive patients in larger sample sizes of diagnostic groups.

The study provides an easy-to-repeat format and promotes multidisciplinary involvement of nursing and medical staff in research. It is possible that aggressive incidents were under-reported by staff. There are many reasons for this, including acceptance as part of routine work, gender of the staff involved and bureaucratic structures that lead to under-reporting (Reference FernsFerns, 2006). As this was a prospective study from the time of admission, it did not include pre-admission aggression, which may have led to underestimating aggression further.

Given that insight levels were lower in the aggressive group, improved communication with patients about their care and treatment should take place from the outset in formal care planning of patients with lower levels of insight. Aggression remains common in therapeutic environments and staff are commonly the target, as shown by this and other studies. Recent changes in workplace legislation in the UK, for example, have put the onus on employers and management to provide a safe working environment. Clearly staff training and experience remain crucial in managing potentially volatile situations. Devising a more accessible reporting system so that proper levels of aggression can be easily recorded would also be beneficial. Bearing in mind that the life experiences of individual staff play a significant role in how they react to violence in the clinical area (Reference FernsFerns, 2006), providing support for staff in the immediate aftermath of an incident and in the longer term should also be considered. Future research could focus on management of patients and support of staff.