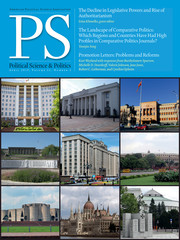 Spotlight: The Decline in Legislative Powers and Rise of Authoritarianism