Is concern about weight decreasing in young adolescents? Evidence from two cross-sectional studies in 1996 and 2007

Childhood obesity has reached epidemic levels(1), which is a concern as the incidence of obesity at an early age frequently persists into adulthood and is consequently associated with increased morbidity and mortality(2, 3). The aim of this research is to report trends in underweight, overweight and obesity in 12–15-year-old school children. A secondary aim is to examine changes in dieting behaviour as this has been less well-documented and may provide additional evidence as to the cause of these trends. Data will be examined by socio-economic status, in order to identify any potential social disparities.

Data were compared from two independent cross-sectional surveys, each from a representative sample of post-primary schools in Northern Ireland using similar methodologies. One thousand three hundred and twenty-four boys and 1160 girls in 1996 and 1274 boys and 1374 girls in 2007 were included aged 12–15 years. Weight and height measurements were collected and BMI was calculated. Participants reported whether they were following any particular diet including self-proposed or prescribed weight reduction diets.

Between 1996 and 2007 the prevalence of overweight and obese girls increased from 15 to 23% and 2 to 6%, respectively. Increases were more modest in boys with overweight increasing from 13 to 18% and obesity from 3 to 6%. The proportion of underweight children decreased over time from 9 to 6% in girls and 8 to 5% in boys (all P<0.001). Evidence of social disparity was observed in girls from a manual socio-economic background with overweight/obesity prevalence rates increasing from 21 to 36% compared with 15 to 26% from a non-manual background. Despite these trends in overweight and obesity, fewer children, in particular girls, reported following weight reduction diets (14% of overweight/obese girls in 2007 compared with 21% in 1996; 8% of boys in 2007 compared with 13% in 1996). Of these overweight and obese girls, the proportion from a manual background following weight-reduction diets decreased from 25 to 11% overtime. 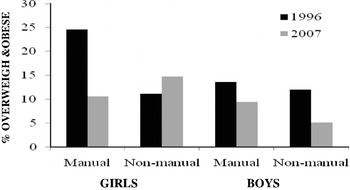