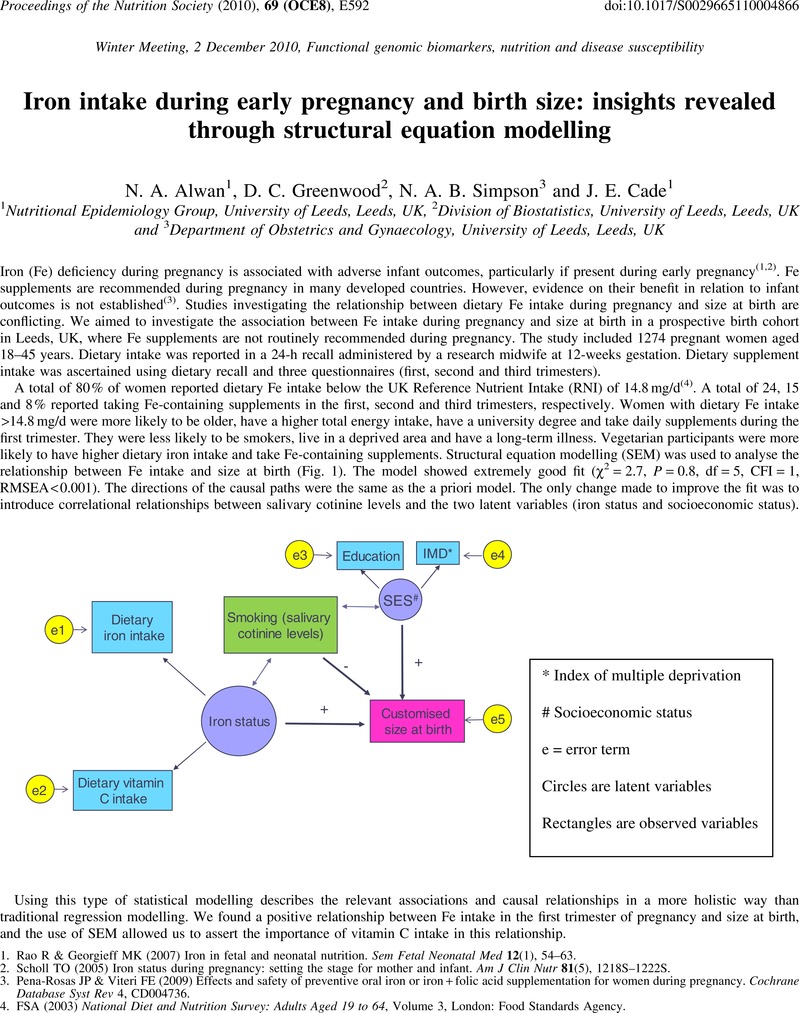 An abstract is not available for this content so a preview has been provided. To view the full text please use the links above to select your preferred format.
Type
Abstract
Information
Proceedings of the Nutrition Society , Volume 69 , Issue OCE8: Winter Meeting, 2 December 2010, Functional genomic biomarkers, nutrition and disease susceptibility , 2010 , E592
DOI: https://doi.org/10.1017/S0029665110004866[Opens in a new window]
Copyright
Copyright © The Authors 2011

Iron (Fe) deficiency during pregnancy is associated with adverse infant outcomes, particularly if present during early pregnancy(Reference Rao and Georgieff1, Reference Scholl2). Fe supplements are recommended during pregnancy in many developed countries. However, evidence on their benefit in relation to infant outcomes is not established(Reference Pena-Rosas and Viteri3). Studies investigating the relationship between dietary Fe intake during pregnancy and size at birth are conflicting. We aimed to investigate the association between Fe intake during pregnancy and size at birth in a prospective birth cohort in Leeds, UK, where Fe supplements are not routinely recommended during pregnancy. The study included 1274 pregnant women aged 18–45 years. Dietary intake was reported in a 24-h recall administered by a research midwife at 12-weeks gestation. Dietary supplement intake was ascertained using dietary recall and three questionnaires (first, second and third trimesters).

A total of 80% of women reported dietary Fe intake below the UK Reference Nutrient Intake (RNI) of 14.8 mg/d(4). A total of 24, 15 and 8% reported taking Fe-containing supplements in the first, second and third trimesters, respectively. Women with dietary Fe intake >14.8 mg/d were more likely to be older, have a higher total energy intake, have a university degree and take daily supplements during the first trimester. They were less likely to be smokers, live in a deprived area and have a long-term illness. Vegetarian participants were more likely to have higher dietary iron intake and take Fe-containing supplements. Structural equation modelling (SEM) was used to analyse the relationship between Fe intake and size at birth (Fig. 1). The model showed extremely good fit (χ2=2.7, P=0.8, df=5, CFI=1, RMSEA<0.001). The directions of the causal paths were the same as the a priori model. The only change made to improve the fit was to introduce correlational relationships between salivary cotinine levels and the two latent variables (iron status and socioeconomic status).

Using this type of statistical modelling describes the relevant associations and causal relationships in a more holistic way than traditional regression modelling. We found a positive relationship between Fe intake in the first trimester of pregnancy and size at birth, and the use of SEM allowed us to assert the importance of vitamin C intake in this relationship.

* Views captured on Cambridge Core between September 2016 - 22nd January 2021. This data will be updated every 24 hours.