Elevated NEFA plasma levels are associated with insulin-resistant states and are involved in endothelial dysfunction(1). Some evidence suggests that the composition of circulating NEFA may influence endothelial function(2). Here, we assess the effect of four different fatty acid (FA) profiles, representing blood levels typically reported following dietary patterns, on markers of endothelial function in vitro, prostacyclin (PGI2) and nitric oxide (NO) production. SFA (16:0 and 18:0), MUFA (18:1n−9) and PUFA (18:2n−6, 20:4n−6, 20:5n−3 and 22:6n−3) were complexed with bovine serum albumin (BSA) to obtain a molar ratio of 2.5:1 and combined in different proportions to obtain four different FA profiles so that they are either rich in SFA, MUFA, n−6 PUFA or n−3 PUFA. Human dermal microvascular endothelial cells (HDMEC) were incubated with each FA profile for 24 h at a normal (400 μm) or higher concentration (1000 μm), corresponding to healthy and insulin-resistant plasma levels, respectively, with or without TNFα (24 h, 10 ng/ml) or insulin (2 h, 1 μg/ml), in four replicate experiments. Endothelial function was assessed by measuring concentrations in the medium of NO by fluorometric assay (Cayman Europe) and PGI2 by ELISA (Cayman Europe), and concentrations were adjusted to the total cell protein content measured by BCA assay (Pierce). There was no difference in NO production following different FA profiles, neither at higher or normal concentrations. The high n−6 PUFA profile significantly increased PGI2 production (P<0.01), compared to MUFA and SFA profiles. The high n−3 PUFA profile decreased PGI2 production compared to other FA profiles (P=0.053) (Figure). There was no difference between the higher and normal FA concentrations in their effects on PGI2 production. 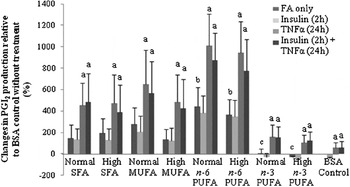 In all profiles, PGI2 was significantly increased by TNFα (P<0.01), but unchanged by insulin treatment; there was no interaction between the FA profile and inflammatory stimulus. The data from the study are the first in vitro study to show that treatment of endothelial cells with physiological concentrations of FA added as profiles representing those found circulating in the blood may influence the vasodilatory function of the microvascular endothelium. This will further our understanding of the effects of circulating NEFA on endothelial function.