Essential fatty acids (EFA) have unique roles as precursor molecules of chemical regulators of inflammatory cell function(1–3). In comparison with linoleic acid (18: 2n-6), γ-linolenic acid (GLA; 18: 3n-6) may have superior biopotency because the GLA bypasses the Δ6 desaturation, which is regarded as a key regulatory rate-limiting enzymic step controlling the formation of long-chain (LC) PUFA(4, 5). The present study investigated GLA-rich borage oil supplementation in relation to the monocyte chemoattractant protein 1 (MCP-1; CCL2) expression from peripheral blood mononuclear cells (PBMC) at the gene and protein levels in human subjects. Seven healthy volunteers who ingested 14 g borage oil/d consecutively for 13 weeks were studied. It was found that the MCP-1 production from both unstimulated and phytohaemagglutinin (PHA)-stimulated PBMC was reduced during the time-course of the intervention. Furthermore, MCP-1 from the PHA-stimulated PBMC decreased significantly during the 13 weeks of the intervention period. In addition, the level of PBMC MCP-1 gene expression was reduced significantly during the supplementation. A significant positive correlation was found between the expression of MCP-1 gene and MCP-1 production from both unstimulated (r 0.40, P<0.05; Figure (A)) and PHA-stimulated PBMCs (r 0.66, P<0.001; Figure (B)). 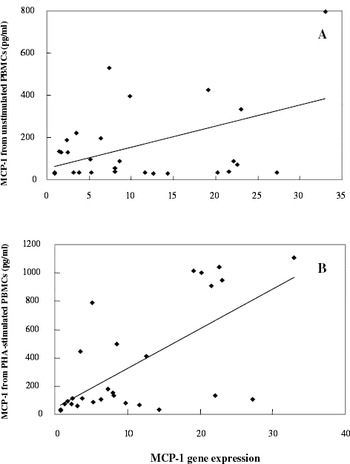