Cocoa (Theobroma cacao) is a significant source of dietary flavanols, which have been shown to exert beneficial effects on the vascular system(1). However, the flavanol content of cocoa and cocoa-derived foods/beverages is dependent upon a number of agricultural and industrial practices, most notably the fermentation and alkalisation of cocoa beans. Such processing results in considerable alterations in flavanol content, in particular via the oxidation of the flavanol catechol moiety during alkalisation(2). In addition, alkalisation may lead to non-enzymatic, C-glycosylation of flavan-3-ols, yielding flavanol-C-β-D-glycopyranosides(3) and/or the isomerisation of (−)-epicatechin to (+)-epicatechin. Such changes have the potential to impact on the bioavailability of flavanols from the cocoa and their well-characterised vascular effects.

We have performed a randomised, double blind, cross-over-intervention study to assess the acute vascular effects of a natural (non-alkalised) cocoa (1746 mg CF), a brown (medium alkalised cocoa) (410 mg CF) and a black (heavily alkalised cocoa) (1.3 mg CF). Ten healthy male volunteers followed a 24 h low flavonoid diet prior to initiation of each arm of the study. Subjects had their endothelium-dependent dilatation of the brachial artery measured by flow-mediated dilatation (FMD) at baseline prior to the consumption of the test cocoas. Further FMD assessments were made at 2 and 4 h post cocoa consumption. Blood samples were drawn prior to cocoa intake (baseline) and 0.5, 1, 1.5, 2, 3 and 4 h post the intake for the assessment of flavanol and flavanol metabolites. The study was approved by the Ethical Committee of the University of Reading. 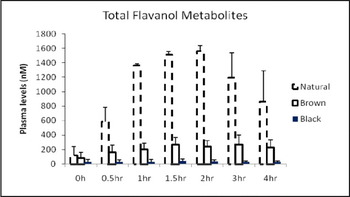 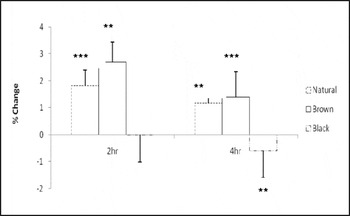 Alkalisation of cocoa was observed to significantly reduce the amount of flavanols and metabolites measurable in the circulation (Fig. 1). Physiologically significant increases in endothelium-dependent vasodilatation (from a mean baseline FMD response of 5.7) of the brachial artery was observed at 2 and 4 h post ingestion of the natural and brown cocoa, but not following consumption of the black cocoa. While the highest increase in FMD response correlated with the Tmax for flavanol absorption (both 2 h), there was no dose-dependency with regard to the total plasma flavanol levels, indicating either that a plateau effect had been reached with respect to FMD, or that specific flavanol metabolites are produced during alkalisation (yet to be identified) that also possess vasoactive properties. In conclusion, heavy alkalisation of cocoa appears to negate its vascular effects, while a milder alkalisation appears to produce cocoa, which maintains its beneficial vascular effects.