Under One Sky: The IAU Centenary Symposium 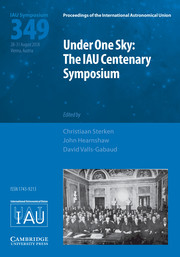