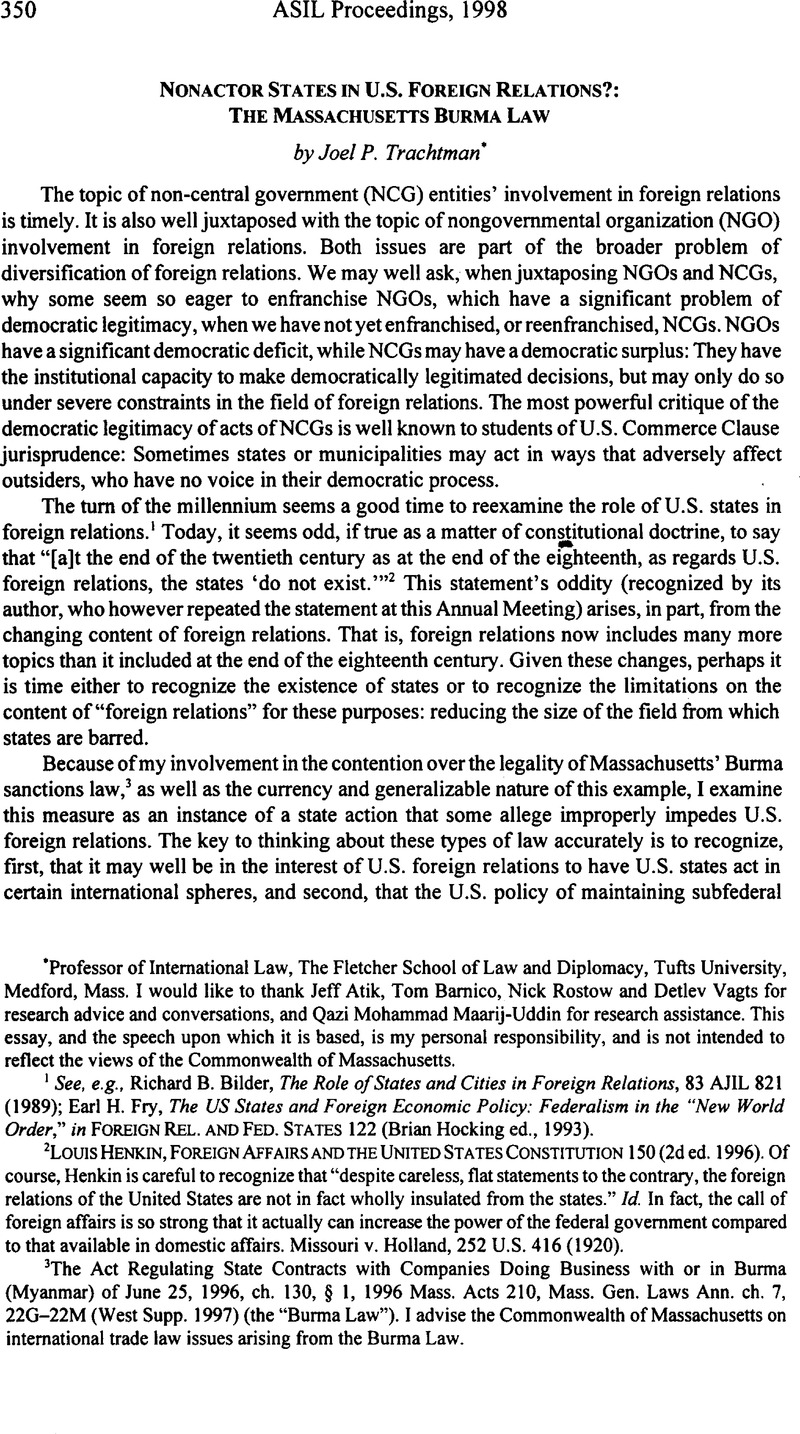 2 Louis Henkin, Foreign Affairs and the United States Constitution 150 (2d ed. 1996). Of course, Henkin is careful to recognize that “despite careless, flat statements to the contrary, the foreign relations of the United States are not in fact wholly insulated from the states.” Id. In fact, the call of foreign affairs is so strong that it actually can increase the power of the federal government compared to that available in domestic affairs. Missouri v. Holland, 252 U.S. 416 (1920).

7 Of course, as a matter of international law, the United States, like other WTO members, has agreed to binding international dispute resolution.

8 Section 102 of the URAA, 19 U.S.C. 3512, states that Congress approves the GPA. The GPA would thus appear to become the law of the United States, and indeed Congress contemplated in § 102(c) that the federal government could sue to enforce the Uruguay Round Agreements in U.S. courts. However, Congress provided therein that no other person would have a private right of action.

9 It is worth questioning whether this burden should not be left on the federal legislature. See Goldsmith, Jack L., Federal Courts, Foreign Affairs and Federalism, 83 Va. L. Rev. 1617 (1997).

14 The Court stated, “We agree with the Court of Appeals, however, that by flatly prohibiting state purchases from repeat labor law violators Wisconsin ‘simply is not functioning as a private purchaser of services... ‘; for all practical purposes, Wisconsin’s debarment scheme is tantamount to regulation.” 475 U.S. at 289. The Court seemed to emphasize the need for a flat prohibition as a basis for finding that the Wisconsin law was regulatory in nature.

16 DeCanas v. Bica, 424 U.S. 351 (1976) (no preemption where subject matter within state concurrent authority and no clear congressional intent to preempt); Florida Lime & Avocado Growers, Inc. v. Paul, 373 U.S. 132 (1963) (“federal regulation ... should not be deemed preemptive of state regulatory power in the absence of persuasive reasons—either that the nature of the regulated subject matter permits no other conclusion, or that Congress has unmistakably so ordained.”). But see Hines v. Davidowitz, 312 U.S. 52 (1941) (congressional intent to act exclusively invalidates Pennsylvania statute modeled after federal law). There is no showing that Congress intended to act exclusively in connection with the federal Burma law.

26 In Justice Sandra Day O’Connor’s words, “Where, however, a regulation ‘affirmatively’ or clearly’ discriminates against interstate commerce on its face or in practical effect, it violates the Constitution unless the discrimination is demonstrably justified by a valid factor unrelated to protectionism.” C&A Carbone, Inc. v. Town of Clarkstown, 114 S.Ct. 1677, 1688 (1994) (O’Connor, J., concurring).

36 Barclays Bank v. Franchise Tax Bd., 512 U.S. 298, 324, 329 (1994). While Congress has delegated power to the Executive pursuant to various measures, none of these delegations seem to denote an intent to preempt, nor has the Executive acted to, or voiced a desire to, preempt.

* I would like to thank Jeff Atik, Tom Barnico, Nick Rostow and Detlev Vagts for research advice and conversations, and Qazi Mohammad Maarij-Uddin for research assistance. This essay, and the speech upon which it is based, is my personal responsibility, and is not intended to reflect the views of the Commonwealth of Massachusetts.