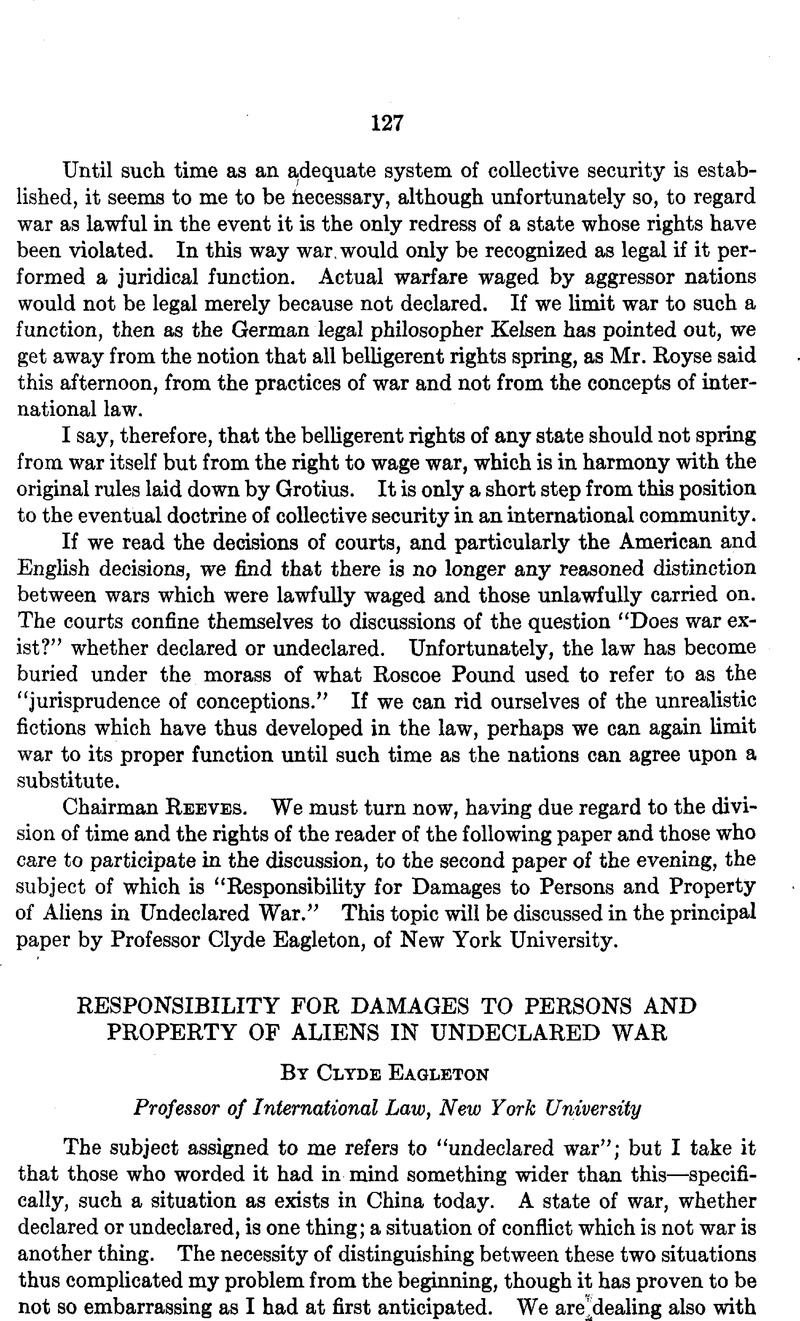 6 Shinobu, J., International Law in the Shanghai Conflict (Maruzen, Tokyo, 1933), p. 56 ; see also p. 209. “The measure of private rights in war and the extent to which they are subject to belligerent rights depend on the existence of a state of war, and not on a declaration of war or a recognition of belligerency. The indicia of a state of war may be said to be an armed contest between two states or parts of the same state conducted by regularly organized military bodies and having an avowed political object in view.” Borchard, The Diplomatic Protection of Citizens Abroad (New York, 1926), p. 100 .

7 Moore, J. B., International Arbitrations (Washington, 1898), IV, p. 3720 . Many other such cases, involving or not involving responsibility, are to be found in this volume. The American Chilean Claims Commission under the Treaty of August 7, 1892, laid down the following principles in Shrigley’s Case: “ (a) Neutral property taken for the use or service of armies by officers or functionaries thereunto authorized gives a right to the owner of the property to demand compensation from the government exercising such authority, (b) Neutral property destroyed or taken by soldiers of a belligerent with authorization, or in presence of their officers or commanders, gives a right to compensation, whenever the fact can be proved that said officers or commanders had the means of preventing the outrage and did not make the necessary efforts to prevent it. (c) Acts of simple marauding or pillage practised by soldiers absent from their regiments and from the close vigilance of their commanders do not affect the responsibility of governments. Such acts are considered as common crimes, subject only to ordinary penalties.” Ibid., p. 3712.

11 Whiteman, op. tit., p. 919. The Congress of the United States, in 1937, authorized payment (Pub. No. 74, 75th Cong., 1st Sess.) of the claims of certain citizens of Nicaragua arising out of the military occupation of Nicaragua by United States forces in 1921 and later.

12 “With regard to the first claim, the umpire is of opinion that the farm was occupied by Spain for military use without the owner’s consent, express or implied; that it was situated in a district permanently occupied by the Spanish forces; that it is usual in such cases to give compensation.…” Wilson’s Case, Moore, Arbitrations, IV, p. 3675.

“General Jauregin was doubtless justified in self-defense in taking refuge in Bowen’s house; but it was certainly his doing so which brought Carvajal’s attack upon the house during which the claimant was wounded. The umpire therefore considers that he is entitled to compensation on both these accounts” [damage to house, and personal wounds]. Bowen’s Case, ibid., p. 3721.

General Corona had undoubtedly a right to appropriate Elliott’s property, if necessary for the defense of the country against the French invaders, or to devastate it, if the war required it. The demands of war are even more absolute than those to save one’s life, and, nothing appearing to the contrary, he was obliged to do it. But in all such cases it is expected that the government will repay for the injuries done as much as may be in its power, so that claimant seems to be fairly entitled to compensation.…” Elliott’s Case, ibid., p. 3720. See also Willett’s Case, ibid., p. 3743; and the case of Mrs. Mathilde Baker, above cited (note 10, supra).

14 “The United States cannot be responsible for any injury caused by the shells thrown in the attacks upon Vicksburg.” Cleworth’s Case, Moore, Arb., IV, p. 3675 .

“Neutral’s property in a belligerent territory shares the fate of war the same as that of subjects or citizens. If injured or destroyed in battle or siege, in the absence of circumstances evincing wantonness or culpable neglect on the part of the government whose jurisdiction it is, the public law furnished the owner no redress against such government.” Castel’s Case, Moore, Arbitrations, IV, p. 3710 .

“The destruction of private property in war where no military end is served is illegitimate.” Borchard, op. cit, p. 261.

19 “The umpire is of opinion that when in time of war and in the enemy’s country straggling soldiers and marauders go about robbing and destroying property it cannot be considered that it is an injury done by authorities of the country whose troops are invading an enemy’s country.” Buentello’s Case, Moore, Arb., IV, p. 3670 (Convention of 1868 with Mexico); see also ibid., the cases of Dresch (p. 3669), Antrey (p. 3672), Giles (p. 3704), and Shrigley (quoted in note 7 supra). See Borchard, op. cit., §103.

Contra: “It has been alleged that in the above mentioned instance the sacking was done by released prisoners, and by a mob belonging to the population of the town; but, if that were so, it was the military force commanded by officers who put it in the power of convicts and incited the mob to assist them in their acts of violence and plunder.” Jeannotat’s Case, Moore, Arb., IV, p. 3674 (Convention of 1868 with Mexico). See also the cases of Brooks (p. 3672), and DuBois (p. 3712).

Shinobu says that these rules, like the unratified Declaration of London, “though no more than a book-law, should equally be taken as standard principles in regulating war in the air for the present and future.” Op. cit., p. 170.

24 New York Times, April 19, 1938. According to Shinobu, Japan apologized and accepted responsibility for the accidental bombing of the Chinese Yung-An mill, outside the field of conflict at Shanghai, in 1932. Op. cit., pp. 126-129.

“A state must accord to foreigners to whom damage has been caused by persons taking part in an insurrection or riot or by mob violence the same indemnities as it accords to its own nationals in similar circumstances.” Basis of Discussion No. 22(b), League of Nations, Conference for the Codification of International Law, Bases of Discussion, III (1929. V.3).

26 Mr. Marcy, , Secretary of State, to Count Sartiges, French Minister, Feb. 26, 1857, Moore, Digest, VI, p. 928 . Lord Palmerston in 1857 accepted this statement, and used it to excuse the British Government from responsibility for injuries occasioned at Sebastopol: “Those who go and settle in a foreign country must abide the chances which befall that country; and if they have any claim, it must be upon the government of the country in which they reside; but they certainly can have no claim whatever upon the government which thinks right to commit acts of hostility against that state.” Ibid., p. 939.

In the case of the Brig General Armstrong, the United States addressed to Portugal a claim based upon the failure of Portugal to restrain a British attack upon an American vessel within the territorial waters of Portugal at Fayal, though it was clearly impossible for the Portuguese at that point to have prevented the superior British naval strength from the attack. Moore, International Arbitrations, II, p. 1071.

27 The King of the Two Sicilies made compensation to citizens of the United States for the wrongful acts of Murat, Moore, Digest, I, p. 249; the Belgian Government was called upon by the United States to pay damages for injuries resulting from the Dutch bombardment of Antwerp in 1830, ibid., VI, pp. 942-948; Great Britain demanded indemnity from Tuscany for damages to a British citizen occasioned by Austria in 1852, ibid., VI, p. 929. Other cases cited by Marcy were the British bombardment of Canton, and the British bombardment of Copenhagen in 1807. See also Moore, Digest, I, p. 249 et seq.

30 League of Nations, Conference for the Codification of International Law, Bases of Discussion, III, Responsibility of States for Damage Caused in their Territory to the Person or Property of Foreigners (1929.V.3), Nos. 21 and 22.

31 American Journal Of International Law, Vol. 23 (1929), Spl. Supp., p. 196 . The Comment upon this Article says: “Where the forces of another state temporarily displace the local government, against that government’s will, the principal condition of responsibility is removed. It has temporarily and pro tanto no power in its own territory. It is, therefore, proper to relieve it of responsibility in such cases when the acts causing injury to aliens are attributable to the state intervening, and not to the government which has been displaced. The same rule would apply where bombardments or interventions by other states are the direct cause of injury. The bombarding or intervening state should then have responsibility, according to general principles, as a result of injuries unlawfully inflicted upon aliens.”

37 Information furnished by the Department of State.

39 Article 3 of Hague Convention IV, above quoted, of course holds a belligerent responsible for violation of the law of war.

Shinobu accepts the principle “that unlawful injury to the lives or property of enemy civilians or of foreigners, by whatever means accomplished, will necessarily involve responsibility therefor.” Op. cit., p. 209.

Sir John Simon, in a note of February, 1932, asserted that the British Government “must, in this unfortunate conflict between China and Japan, hold each side responsible for any loss to British life and property that may be caused by their respective armed forces.’’ Quoted by Q. Wright, “Responsibility for Losses in Shanghai,” loc. cit., p. 586. Mr. Wright suggests as a better principle responsibility of the territorial state if there is lack of |due diligence; otherwise, responsibility for the aggressor state.

42 Professor Wright, speaking of the situation at Shanghai in 1932, says: “For determining responsibility for most of the damage, it would be necessary to decide first whether either the Chinese or Japanese forces initiated military action in violation of existing treaties or international law. If the Japanese activities were not justified under the circumstances, then Japan would be liable for all of the damages, whether sustained by Chinese nationals or by nationals of third states.” Loc. cit., p. 589.