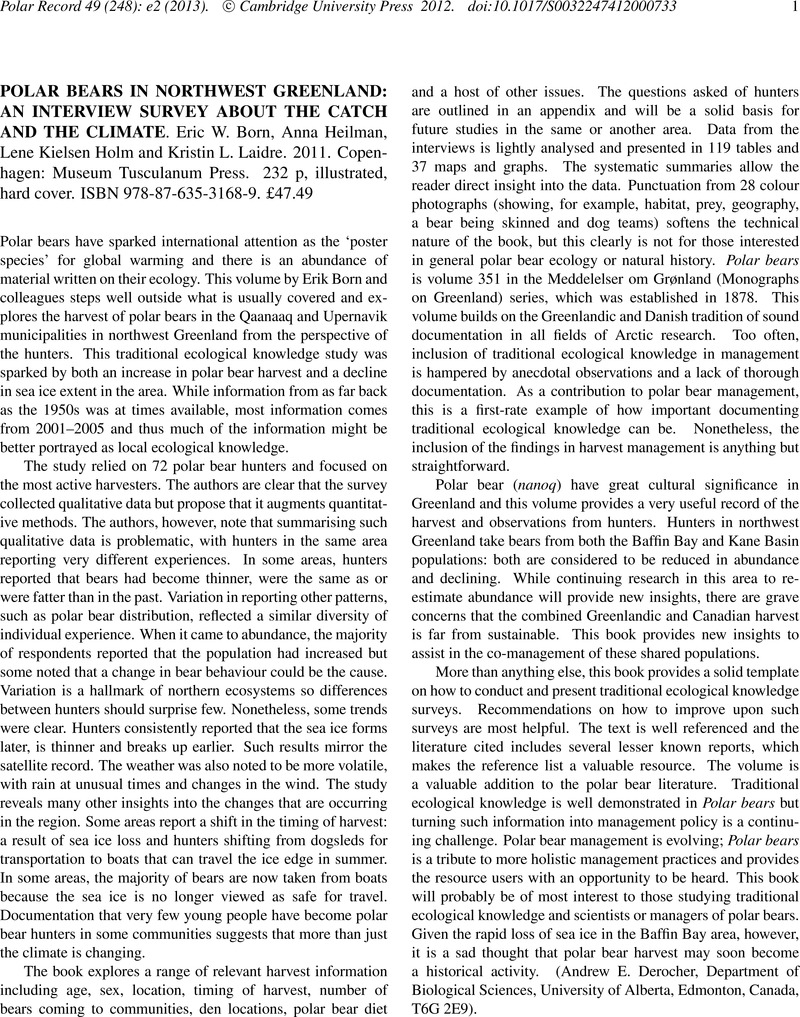 An abstract is not available for this content so a preview has been provided. To view the full text please use the links above to select your preferred format.
Type
Book Review
Information
Polar Record , Volume 49 , Issue 1 , January 2013 , e2
DOI: https://doi.org/10.1017/S0032247412000733[Opens in a new window]
Copyright
Copyright © Cambridge University Press 2012

Polar bears have sparked international attention as the ‘poster species’ for global warming and there is an abundance of material written on their ecology. This volume by Erik Born and colleagues steps well outside what is usually covered and explores the harvest of polar bears in the Qaanaaq and Upernavik municipalities in northwest Greenland from the perspective of the hunters. This traditional ecological knowledge study was sparked by both an increase in polar bear harvest and a decline in sea ice extent in the area. While information from as far back as the 1950s was at times available, most information comes from 2001–2005 and thus much of the information might be better portrayed as local ecological knowledge.

The study relied on 72 polar bear hunters and focused on the most active harvesters. The authors are clear that the survey collected qualitative data but propose that it augments quantitative methods. The authors, however, note that summarising such qualitative data is problematic, with hunters in the same area reporting very different experiences. In some areas, hunters reported that bears had become thinner, were the same as or were fatter than in the past. Variation in reporting other patterns, such as polar bear distribution, reflected a similar diversity of individual experience. When it came to abundance, the majority of respondents reported that the population had increased but some noted that a change in bear behaviour could be the cause. Variation is a hallmark of northern ecosystems so differences between hunters should surprise few. Nonetheless, some trends were clear. Hunters consistently reported that the sea ice forms later, is thinner and breaks up earlier. Such results mirror the satellite record. The weather was also noted to be more volatile, with rain at unusual times and changes in the wind. The study reveals many other insights into the changes that are occurring in the region. Some areas report a shift in the timing of harvest: a result of sea ice loss and hunters shifting from dogsleds for transportation to boats that can travel the ice edge in summer. In some areas, the majority of bears are now taken from boats because the sea ice is no longer viewed as safe for travel. Documentation that very few young people have become polar bear hunters in some communities suggests that more than just the climate is changing.

The book explores a range of relevant harvest information including age, sex, location, timing of harvest, number of bears coming to communities, den locations, polar bear diet and a host of other issues. The questions asked of hunters are outlined in an appendix and will be a solid basis for future studies in the same or another area. Data from the interviews is lightly analysed and presented in 119 tables and 37 maps and graphs. The systematic summaries allow the reader direct insight into the data. Punctuation from 28 colour photographs (showing, for example, habitat, prey, geography, a bear being skinned and dog teams) softens the technical nature of the book, but this clearly is not for those interested in general polar bear ecology or natural history. Polar bears is volume 351 in the Meddelelser om Grønland (Monographs on Greenland) series, which was established in 1878. This volume builds on the Greenlandic and Danish tradition of sound documentation in all fields of Arctic research. Too often, inclusion of traditional ecological knowledge in management is hampered by anecdotal observations and a lack of thorough documentation. As a contribution to polar bear management, this is a first-rate example of how important documenting traditional ecological knowledge can be. Nonetheless, the inclusion of the findings in harvest management is anything but straightforward.

Polar bear (nanoq) have great cultural significance in Greenland and this volume provides a very useful record of the harvest and observations from hunters. Hunters in northwest Greenland take bears from both the Baffin Bay and Kane Basin populations: both are considered to be reduced in abundance and declining. While continuing research in this area to re-estimate abundance will provide new insights, there are grave concerns that the combined Greenlandic and Canadian harvest is far from sustainable. This book provides new insights to assist in the co-management of these shared populations.

More than anything else, this book provides a solid template on how to conduct and present traditional ecological knowledge surveys. Recommendations on how to improve upon such surveys are most helpful. The text is well referenced and the literature cited includes several lesser known reports, which makes the reference list a valuable resource. The volume is a valuable addition to the polar bear literature. Traditional ecological knowledge is well demonstrated in Polar bears but turning such information into management policy is a continuing challenge. Polar bear management is evolving; Polar bears is a tribute to more holistic management practices and provides the resource users with an opportunity to be heard. This book will probably be of most interest to those studying traditional ecological knowledge and scientists or managers of polar bears. Given the rapid loss of sea ice in the Baffin Bay area, however, it is a sad thought that polar bear harvest may soon become a historical activity.