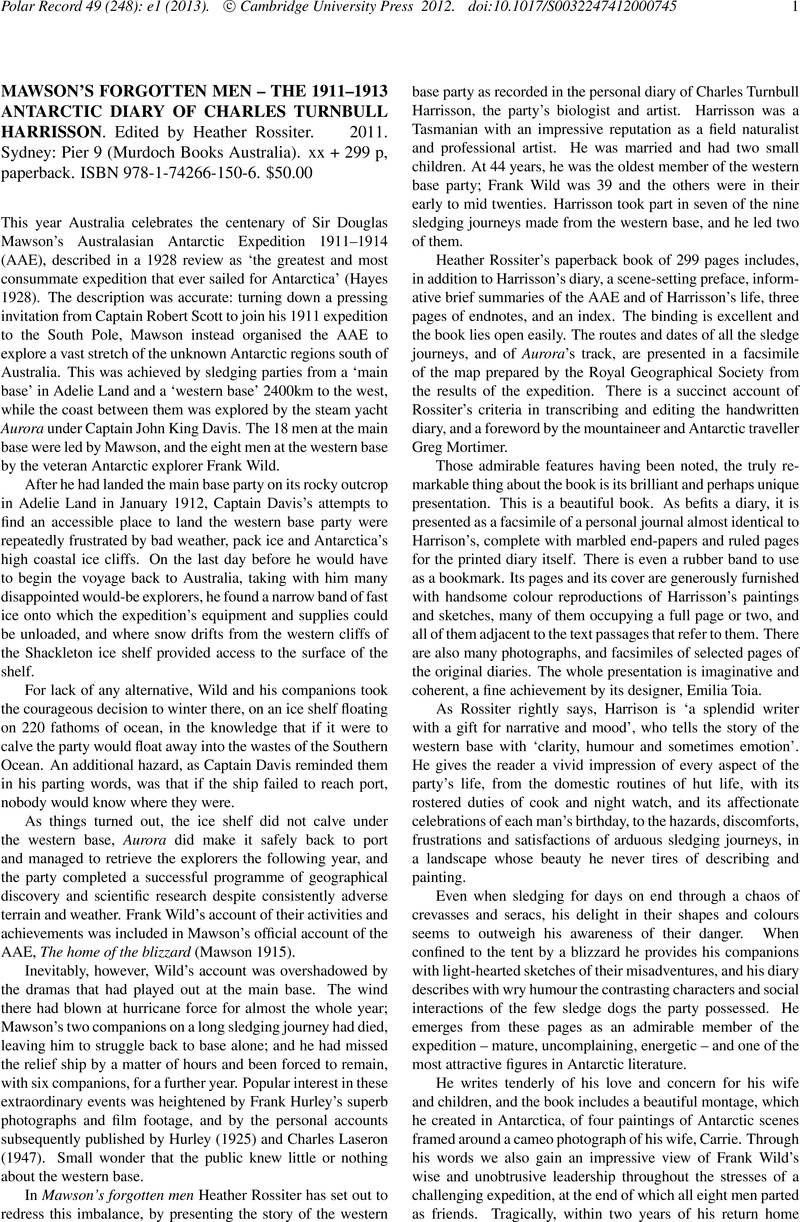 An abstract is not available for this content so a preview has been provided. To view the full text please use the links above to select your preferred format.
Type
Book Review
Information
Polar Record , Volume 49 , Issue 1 , January 2013 , e1
DOI: https://doi.org/10.1017/S0032247412000745[Opens in a new window]
Copyright
Copyright © Cambridge University Press 2012

This year Australia celebrates the centenary of Sir Douglas Mawson's Australasian Antarctic Expedition 1911–1914 (AAE), described in a 1928 review as ‘the greatest and most consummate expedition that ever sailed for Antarctica’ (Hayes Reference Hayes1928). The description was accurate: turning down a pressing invitation from Captain Robert Scott to join his 1911 expedition to the South Pole, Mawson instead organised the AAE to explore a vast stretch of the unknown Antarctic regions south of Australia. This was achieved by sledging parties from a ‘main base’ in Adelie Land and a ‘western base’ 2400km to the west, while the coast between them was explored by the steam yacht Aurora under Captain John King Davis. The 18 men at the main base were led by Mawson, and the eight men at the western base by the veteran Antarctic explorer Frank Wild.

After he had landed the main base party on its rocky outcrop in Adelie Land in January 1912, Captain Davis's attempts to find an accessible place to land the western base party were repeatedly frustrated by bad weather, pack ice and Antarctica's high coastal ice cliffs. On the last day before he would have to begin the voyage back to Australia, taking with him many disappointed would-be explorers, he found a narrow band of fast ice onto which the expedition's equipment and supplies could be unloaded, and where snow drifts from the western cliffs of the Shackleton ice shelf provided access to the surface of the shelf.

For lack of any alternative, Wild and his companions took the courageous decision to winter there, on an ice shelf floating on 220 fathoms of ocean, in the knowledge that if it were to calve the party would float away into the wastes of the Southern Ocean. An additional hazard, as Captain Davis reminded them in his parting words, was that if the ship failed to reach port, nobody would know where they were.

As things turned out, the ice shelf did not calve under the western base, Aurora did make it safely back to port and managed to retrieve the explorers the following year, and the party completed a successful programme of geographical discovery and scientific research despite consistently adverse terrain and weather. Frank Wild's account of their activities and achievements was included in Mawson's official account of the AAE, The home of the blizzard (Mawson Reference Mawson1915).

Inevitably, however, Wild's account was overshadowed by the dramas that had played out at the main base. The wind there had blown at hurricane force for almost the whole year; Mawson's two companions on a long sledging journey had died, leaving him to struggle back to base alone; and he had missed the relief ship by a matter of hours and been forced to remain, with six companions, for a further year. Popular interest in these extraordinary events was heightened by Frank Hurley's superb photographs and film footage, and by the personal accounts subsequently published by Hurley (Reference Hurley1925) and Charles Laseron (Reference Laseron1947). Small wonder that the public knew little or nothing about the western base.

In Mawson's forgotten men Heather Rossiter has set out to redress this imbalance, by presenting the story of the western base party as recorded in the personal diary of Charles Turnbull Harrisson, the party's biologist and artist. Harrisson was a Tasmanian with an impressive reputation as a field naturalist and professional artist. He was married and had two small children. At 44 years, he was the oldest member of the western base party; Frank Wild was 39 and the others were in their early to mid twenties. Harrisson took part in seven of the nine sledging journeys made from the western base, and he led two of them.

Heather Rossiter's paperback book of 299 pages includes, in addition to Harrisson's diary, a scene-setting preface, informative brief summaries of the AAE and of Harrisson's life, three pages of endnotes, and an index. The binding is excellent and the book lies open easily. The routes and dates of all the sledge journeys, and of Aurora's track, are presented in a facsimile of the map prepared by the Royal Geographical Society from the results of the expedition. There is a succinct account of Rossiter's criteria in transcribing and editing the handwritten diary, and a foreword by the mountaineer and Antarctic traveller Greg Mortimer.

Those admirable features having been noted, the truly remarkable thing about the book is its brilliant and perhaps unique presentation. This is a beautiful book. As befits a diary, it is presented as a facsimile of a personal journal almost identical to Harrison’s, complete with marbled end-papers and ruled pages for the printed diary itself. There is even a rubber band to use as a bookmark. Its pages and its cover are generously furnished with handsome colour reproductions of Harrisson's paintings and sketches, many of them occupying a full page or two, and all of them adjacent to the text passages that refer to them. There are also many photographs, and facsimiles of selected pages of the original diaries. The whole presentation is imaginative and coherent, a fine achievement by its designer, Emilia Toia.

As Rossiter rightly says, Harrison is ‘a splendid writer with a gift for narrative and mood’, who tells the story of the western base with ‘clarity, humour and sometimes emotion’. He gives the reader a vivid impression of every aspect of the party's life, from the domestic routines of hut life, with its rostered duties of cook and night watch, and its affectionate celebrations of each man's birthday, to the hazards, discomforts, frustrations and satisfactions of arduous sledging journeys, in a landscape whose beauty he never tires of describing and painting.

Even when sledging for days on end through a chaos of crevasses and seracs, his delight in their shapes and colours seems to outweigh his awareness of their danger. When confined to the tent by a blizzard he provides his companions with light-hearted sketches of their misadventures, and his diary describes with wry humour the contrasting characters and social interactions of the few sledge dogs the party possessed. He emerges from these pages as an admirable member of the expedition – mature, uncomplaining, energetic – and one of the most attractive figures in Antarctic literature.

He writes tenderly of his love and concern for his wife and children, and the book includes a beautiful montage, which he created in Antarctica, of four paintings of Antarctic scenes framed around a cameo photograph of his wife, Carrie. Through his words we also gain an impressive view of Frank Wild's wise and unobtrusive leadership throughout the stresses of a challenging expedition, at the end of which all eight men parted as friends. Tragically, within two years of his return home Harrisson was dead, drowned when a ship on which he had made a brief visit to Macquarie Island sank with all hands in a gale.

Heather Rossiter's delightful book is an important contribution to Antarctic history and literature, and she is to be thanked for ensuring that Charles Harrisson and his comrades of the western base are no longer Mawson's forgotten men.