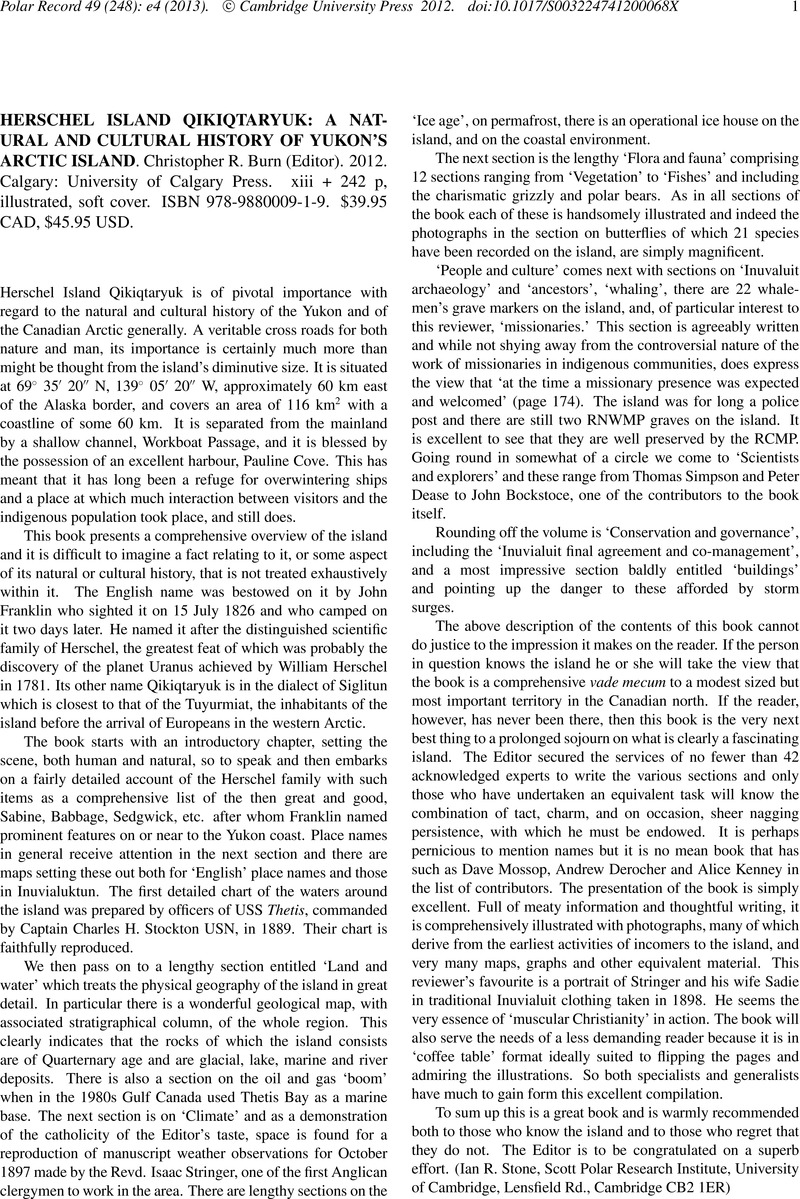 An abstract is not available for this content so a preview has been provided. To view the full text please use the links above to select your preferred format.
Type
Book Review
Information
Polar Record , Volume 49 , Issue 1 , January 2013 , e4
DOI: https://doi.org/10.1017/S003224741200068X[Opens in a new window]
Copyright
Copyright © Cambridge University Press 2012

Herschel Island Qikiqtaryuk is of pivotal importance with regard to the natural and cultural history of the Yukon and of the Canadian Arctic generally. A veritable cross roads for both nature and man, its importance is certainly much more than might be thought from the island's diminutive size. It is situated at 69° 35′ 20″ N, 139° 05′ 20″ W, approximately 60 km east of the Alaska border, and covers an area of 116 km2 with a coastline of some 60 km. It is separated from the mainland by a shallow channel, Workboat Passage, and it is blessed by the possession of an excellent harbour, Pauline Cove. This has meant that it has long been a refuge for overwintering ships and a place at which much interaction between visitors and the indigenous population took place, and still does.

This book presents a comprehensive overview of the island and it is difficult to imagine a fact relating to it, or some aspect of its natural or cultural history, that is not treated exhaustively within it. The English name was bestowed on it by John Franklin who sighted it on 15 July 1826 and who camped on it two days later. He named it after the distinguished scientific family of Herschel, the greatest feat of which was probably the discovery of the planet Uranus achieved by William Herschel in 1781. Its other name Qikiqtaryuk is in the dialect of Siglitun which is closest to that of the Tuyurmiat, the inhabitants of the island before the arrival of Europeans in the western Arctic.

The book starts with an introductory chapter, setting the scene, both human and natural, so to speak and then embarks on a fairly detailed account of the Herschel family with such items as a comprehensive list of the then great and good, Sabine, Babbage, Sedgwick, etc. after whom Franklin named prominent features on or near to the Yukon coast. Place names in general receive attention in the next section and there are maps setting these out both for ‘English’ place names and those in Inuvialuktun. The first detailed chart of the waters around the island was prepared by officers of USS Thetis, commanded by Captain Charles H. Stockton USN, in 1889. Their chart is faithfully reproduced.

We then pass on to a lengthy section entitled ‘Land and water’ which treats the physical geography of the island in great detail. In particular there is a wonderful geological map, with associated stratigraphical column, of the whole region. This clearly indicates that the rocks of which the island consists are of Quarternary age and are glacial, lake, marine and river deposits. There is also a section on the oil and gas ‘boom’ when in the 1980s Gulf Canada used Thetis Bay as a marine base. The next section is on ‘Climate’ and as a demonstration of the catholicity of the Editor's taste, space is found for a reproduction of manuscript weather observations for October 1897 made by the Revd. Isaac Stringer, one of the first Anglican clergymen to work in the area. There are lengthy sections on the ‘Ice age’, on permafrost, there is an operational ice house on the island, and on the coastal environment.

The next section is the lengthy ‘Flora and fauna’ comprising 12 sections ranging from ‘Vegetation’ to ‘Fishes’ and including the charismatic grizzly and polar bears. As in all sections of the book each of these is handsomely illustrated and indeed the photographs in the section on butterflies of which 21 species have been recorded on the island, are simply magnificent.

‘People and culture’ comes next with sections on ‘Inuvaluit archaeology’ and ‘ancestors’, ‘whaling’, there are 22 whalemen's grave markers on the island, and, of particular interest to this reviewer, ‘missionaries.’ This section is agreeably written and while not shying away from the controversial nature of the work of missionaries in indigenous communities, does express the view that ‘at the time a missionary presence was expected and welcomed’ (page 174). The island was for long a police post and there are still two RNWMP graves on the island. It is excellent to see that they are well preserved by the RCMP. Going round in somewhat of a circle we come to ‘Scientists and explorers’ and these range from Thomas Simpson and Peter Dease to John Bockstoce, one of the contributors to the book itself.

Rounding off the volume is ‘Conservation and governance’, including the ‘Inuvialuit final agreement and co-management’, and a most impressive section baldly entitled ‘buildings’ and pointing up the danger to these afforded by storm surges.

The above description of the contents of this book cannot do justice to the impression it makes on the reader. If the person in question knows the island he or she will take the view that the book is a comprehensive vade mecum to a modest sized but most important territory in the Canadian north. If the reader, however, has never been there, then this book is the very next best thing to a prolonged sojourn on what is clearly a fascinating island. The Editor secured the services of no fewer than 42 acknowledged experts to write the various sections and only those who have undertaken an equivalent task will know the combination of tact, charm, and on occasion, sheer nagging persistence, with which he must be endowed. It is perhaps pernicious to mention names but it is no mean book that has such as Dave Mossop, Andrew Derocher and Alice Kenney in the list of contributors. The presentation of the book is simply excellent. Full of meaty information and thoughtful writing, it is comprehensively illustrated with photographs, many of which derive from the earliest activities of incomers to the island, and very many maps, graphs and other equivalent material. This reviewer's favourite is a portrait of Stringer and his wife Sadie in traditional Inuvialuit clothing taken in 1898. He seems the very essence of ‘muscular Christianity’ in action. The book will also serve the needs of a less demanding reader because it is in ‘coffee table’ format ideally suited to flipping the pages and admiring the illustrations. So both specialists and generalists have much to gain form this excellent compilation.

To sum up this is a great book and is warmly recommended both to those who know the island and to those who regret that they do not. The Editor is to be congratulated on a superb effort.