The Taita Mountain dwarf galago Paragalago sp. was reported in 2002 from the Taita Hills, Kenya (Perkin et al., 2002, Journal of East African Natural History, 91, 1–13). Identification was not possible, but it appeared to represent an undescribed taxon. The Taita Hills are part of the Eastern Arc Mountains, which support many endemic animal and plant species. As 98% of moist montane forests of the Taita Hills have been destroyed by conversion to agricultural lands, the fate of this unidentified dwarf galago has hitherto been unknown. We searched for dwarf galagos during January–March and June–August 2019 in the five largest forest fragments of the Taita Hills, but found them only in Ngangao (1 km2) and Mbololo (2 km2) Forests. 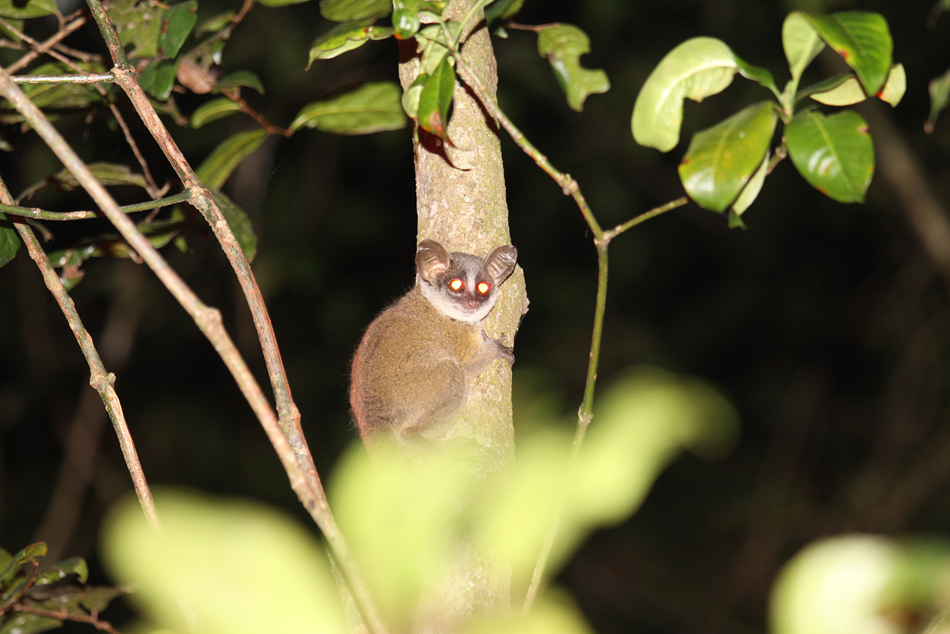 In Ngangao Forest we found only one group of dwarf galagos, comprising < 10 individuals. We saw African wood owls Strix woodfordii hunting dwarf galagos on three occasions, one of which was successful. We regularly observed dwarf galagos hunting insects on small trees with a trunk diameter of 2–4 cm. We also observed galagos both descending to the ground and ascending to the forest canopy at c. 50 m. In the morning group members made loud incremental calls close to their nest site. The Ngangao group used several tree hollows as daytime sleeping sites, moving every few days. We heard and recorded incremental contact calls irregularly throughout the night. Because of the small size of this population, and predation pressure, its future in Ngangao Forest is bleak. In the larger Mbololo Forest we heard dwarf galagos throughout the fragment, although they were shy and our visual observations were few and brief. Recordings of calls were inconclusive as a diagnostic taxonomic tool as we did not hear incremental calls (a screech was used as a contact call).

The taxonomy of the Taita Mountain dwarf galago remains unclear. Dwarf galagos are cryptic, nocturnal species that are most easily recognized from their vocalizations. Our photographs and recordings of vocalizations suggest that the galago of the Taita Hills is related to the Kenya coast dwarf galago Paragalago cocos (Simon Bearder, Thomas Butynski, Yvonne de Yong, Andrew Perkin and Magdalena Svensson, pers. comms). The Kenya coast dwarf galago Paragalago cocos is known only from low elevations (< 250 m), however, and not from montane forests. Our observations suggest the taxon is highly dependent on hollow trees for refuge and as daytime sleeping sites. The remaining forest fragments must be protected to ensure the survival of the Taita Mountain dwarf galago and other endemic animal species. Molecular analysis, ecology and estimates of population size are needed urgently, to facilitate full identification and an assessment of the taxon for the IUCN Red List. This taxon appears to be already on the brink of extinction.