Genetics and the last stand of the Sumatran rhinoceros Dicerorhinus sumatrensis

The Sumatran rhinoceros Dicerorhinus sumatrensis is on the brink of extinction. Although habitat loss and poaching were the reasons of the decline, today's reproductive isolation is the main threat to the survival of the species. Genetic studies have played an important role in identifying conservation priorities, including for rhinoceroses. However, for a species such as the Sumatran rhinoceros, where time is of the essence in preventing extinction, to what extent should genetic and geographical distances be taken into account in deciding the most urgently needed conservation interventions? We propose that the populations of Sumatra and Borneo be considered as a single management unit.

The rhinos…are unaware of their precarious existence. Their fate depends wholly on us, on our commitment to protect them forever. E. Dinerstein (Reference Dinerstein2003)

The geographical delimitation of the subspecies of rhinoceros on Sumatra was previously unclear and the question arose as to whether the populations in Peninsular Malaysia, Sumatra and Borneo (Fig. 1) should be treated as different management units, to preserve genetic diversity (Foose & van Strien, Reference Foose and van Strien1997). The issue persisted even after the 2009 meeting of the Sumatran Rhino Global Management and Propagation Board (responsible for management of the captive population of Sumatran rhinoceros; GMPB Technical Committee, 2009). However, in 1995 Amato et al. had already confirmed Groves’ division of taxa, grouping individuals from Sumatra and Peninsular Malaysia as a single taxon (Groves, Reference Groves1965, Reference Groves1967, Reference Groves and Ryder1993). Almost in parallel, Morales et al. (Reference Morales, Andau, Supriatna, Zainuddin and Melnick1997) analysed the phylogeographic structure of D. s. harrissoni and D. s. sumatrensis. Both studies highlighted the differentiation of the Bornean population as a separate evolutionary unit. However, for Amato et al. (Reference Amato, Wharton, Zainuddin and Powell1995) the genetic differentiation was not enough evidence to support more than one conservation unit for the Sumatran rhinoceros, whereas Morales et al. (Reference Morales, Andau, Supriatna, Zainuddin and Melnick1997) advocated for the treatment of D. s. harrissoni (Borneo) and D. s. sumatrensis (Pensinsular Malaysia and Sumatra) as distinct management units. Morales et al. (Reference Morales, Andau, Supriatna, Zainuddin and Melnick1997) argued that an average genetic divergence of 1% between the rhinoceros populations of Sumatra and Borneo justified treating them as separate conservation units. However, a range of 0–4% has been observed between other mammalian conspecifics (Avise & Lansman, Reference Avise, Lansman, Nei and Koehn1983), and 0–2% has been observed among members of the same local population (Nei, Reference Nei1972). A recent study requested by the GMPB shows a close relationship between the three populations (Borneo, Peninsular Malaysia, and Sumatra; J. Rovie-Ryan et al., unpubl. data). 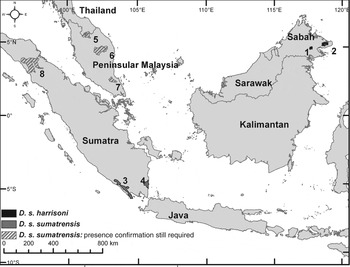 The three genetic studies (Amato et al., Reference Amato, Wharton, Zainuddin and Powell1995; Morales et al., Reference Morales, Andau, Supriatna, Zainuddin and Melnick1997; J. Rovie-Ryan et al., unpubl. data) were based solely on mtDNA but reliance on mtDNA in phylogenetics has been contentious since 2005 when it became clear that individual genes and species phylogenetic trees are not always congruent (Ballard & Rand, Reference Ballard and Rand2005; Hurst & Jiggins, Reference Hurst and Jiggins2005; Rubinoff & Holland, Reference Rubinoff and Holland2005, Wiens et al., Reference Wiens, Kuczynski and Stephens2010). In the case of the family Rhinocerotidae there are difficulties in satisfactorily resolving the rhinoceros phylogeny even using the whole mitochondrial genome (Morales & Melnick, Reference Morales and Melnick1994; Tougard et al., Reference Tougard, Delefosse, Hänni and Montgelard2001; Orlando et al., Reference Orlando, Leonard, Thenot, Laudet, Guerin and Hänni2003; Fernando et al., Reference Fernando, Polet, Foead, Ng, Pastorini and Melnick2006; Willerslev et al., Reference Willerslev, Gilbert, Binladen, Ho, Campos and Ratan2009), and resolution may not be achieved without additional analyses of substantial amounts of nuclear DNA (Willerslev et al., Reference Willerslev, Gilbert, Binladen, Ho, Campos and Ratan2009). However, the subspecies’ genetic differences, as shown by mtDNA in the three separate studies, seem to be minimal. In our roles as biologists, wildlife managers, veterinarians and geneticists closely involved in ongoing efforts to prevent the extinction of the Sumatran rhinoceros in Sabah (northern Borneo, Malaysia) we strongly believe that the observed differences do not justify keeping the Sumatran and Bornean populations as separate management units. This is now even more so, in view of (1) the low and declining number of individuals in each Bornean and Sumatran wild population, (2) that at least two of the 10 individuals in captivity are too old to breed, and (3) that three of those are closely-related males.

A study of the Javan rhinoceros showed that it had low genetic diversity and that there was a critical need for population expansion for the species to survive (Fernando et al., Reference Fernando, Polet, Foead, Ng, Pastorini and Melnick2006). Despite clear results demonstrating that the Ujung Kulon (Indonesia) and Cat Tien (Vietnam) populations represented separate evolutionary significant units it was argued that demographic considerations should override genetic issues in the short term. The Indonesian and Vietnamese governments were urged to exchange Javan rhinoceroses before it was too late. No action was taken and, in Cat Tien National Park, the last individual in Vietnam was found dead in April 2010 (Brook et al., Reference Brook, Van Coeverden de Groot, Mahood and Long2011).

In addition to the low genetic differentiation between the geographical populations of the Sumatran rhinoceros, the family Rhinocerotidae is chromosomally conservative. All species have a karyotype of 2n = 82 despite sharing a common ancestor more than 15 million years ago (Houck et al., Reference Houck, Ryder, Vahala, Kock and Oosterhuis1994). This chromosomal conservation reduces concerns about cytogenetic incompatibility between the populations of Sumatra and Borneo. The shared karyotype coupled with the degree of sequence divergence make outbreeding depression a less likely outcome if individuals, or their gametes, are translocated as part of a conservation management plan.

The genetic diversity of the Sumatran rhinoceros is probably also low (Amato et al., Reference Amato, Wharton, Zainuddin and Powell1995; Morales et al., Reference Morales, Andau, Supriatna, Zainuddin and Melnick1997; J. Rovie-Ryan et al., unpubl. data), and evidence is starting to accumulate that the Bornean population may have reduced reproductive fitness (S. Nathan, pers. comm.) possibly indicating inbreeding depression (Crnokrak & Roff, Reference Crnokrak and Roff1999). Where no unrelated individuals of the same taxon are available, individuals from another subspecies can, in extremis, be used to alleviate inbreeding depression (Frankham et al., Reference Frankham, Ballou and Briscoe2002; Tallmon et al., Reference Tallmon, Luikart and Waples2004; Allendorf & Luikart, Reference Allendorf and Luikart2007). Members of the American Association of Zoological Parks and Aquariums have concluded that mixing of subspecies is appropriate when the extinction of the smallest population would jeopardise the higher taxon (Ryder, Reference Ryder1986), as is the case of the Sumatran rhinoceros and the population of Sabah. From a genetic perspective, the worst situation is where a threatened species exists as a single, inbred population, with no subspecies or related species with which to hybridize. In a few cases, some taxa might only be recovered through the use of intentional hybridization, yet this is least likely to result in outbreeding depression when there is limited genetic divergence between populations (Allendorf & Luikart, Reference Allendorf and Luikart2007).

A viable alternative for the genetic restoration of the Sumatran rhinoceros is genome resource banking (systematic banking of genome resources using cryopreservation) (Johnston & Lacy, Reference Johnston and Lacy1995; Holt & Pickard, Reference Holt and Pickard1999). This procedure can facilitate managed gene flow into isolated populations without the risks of translocating individuals (Allendorf & Luikart, Reference Allendorf and Luikart2007). Genome resource banking coupled with artificial insemination or in vitro fertilization can reduce translocation costs and also equalize sex ratios of breeders by inseminating females with semen from males other than the local dominant, or sole, male (Fickel et al., Reference Fickel, Wagener and Ludwig2007). The first successful artificial insemination in a white rhinoceros was performed in 2007 using fresh semen (Hildebrandt et al., Reference Hildebrandt, Hermes, Walzer, Sós, Molnar and Mezösi2007). In 2009 the frozen and then thawed semen of a white rhinoceros was used successfully in an artificial insemination, thus proving resource banking useful (Hermes et al., Reference Hermes, Göritz, Saragusty, Sós, Molnar and Reid2009). Implementation of such procedures may now be key for preventing the extinction of the Sumatran rhinoceros.

It has been 18 months since the Sumatran Rhino Global Management and Propagation Board decided that further genetic studies are not necessary to reach a decision to treat the captive populations (Way Kambas in Sumatra, Borneo Rhino Sanctuary in Borneo, and Cincinnatti Zoo in the USA) as a single population following the predictions of a population viability analysis (GMPB 2011, unpubl. data) and the genetic arguments advanced here, and to combine efforts to improve gamete transfer (through genome resource banking) between captive Sumatran rhinoceroses. Perhaps the recent capture of Puntung, a young wild female, in Sabah (Borneo Post Online, 2011) will boost government endorsement of the need to exchange gametes between countries. Actions to initiate genome resource banking and artificial insemination or in vitro fertilization are underway in Borneo (S. Nathan, pers. comm.; Sabah Wildlife Department, 2011). Any further prevarication in the use of all possible techniques to boost reproduction in the Sumatran rhinoceros, including the mixing of gametes between populations considered to be separate subspecies, will mean the eventual extinction of populations of Sumatran rhinoceros in Borneo and Sumatra, duplicating the tragedy of the extinction of the Javan rhinoceros population in Vietnam. By agreeing to exchange the animals’ gametes, the Indonesian and Malaysian governments will have made an historical step towards the survival of one of the most charismatic, ancient and enigmatic large mammals.

The team has a common interest in bringing the Sumatran rhinoceros back from the brink of extinction. Benoît Goossens and Milena Salgado-Lynn focus their research on biodiversity responses to habitat fragmentation and degradation. They integrate approaches such as landscape ecology, geographical information systems, animal behaviour, wildlife disease, parasitology and population genetics to understand animal adaptation to landscape disturbance. Jeffrine Rovie-Ryan is a population geneticist. Abdul Ahmad is chairman of the Borneo Rhino Alliance and has a special interest in the ecology and conservation of large mammals. Junaidi Payne is a wildlife ecologist with more than 30 years of experience in tropical ecology and wildlife conservation. Zainal Zainuddin is a wildlife veterinarian working for BORA and managing the Borneo Rhino Sanctuary in Tabin Wildlife Reserve. Senthilvel Nathan is the Chief Wildlife Veterinarian of Sabah Wildlife Department and is currently studying the conservation genetics of the proboscis monkey. Laurentius Ambu's main interest is in sustainable management of wildlife populations.

Genetics and the last stand of the Sumatran rhinoceros Dicerorhinus sumatrensis
×

Genetics and the last stand of the Sumatran rhinoceros Dicerorhinus sumatrensis
×

Genetics and the last stand of the Sumatran rhinoceros Dicerorhinus sumatrensis
×
×