Case Variation and Change in the Nordic Languages 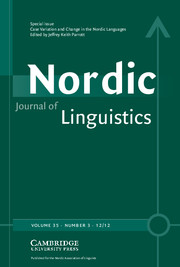