Electromechanics on the Nanometer Scale: Emerging Phenomena, Devices, and Applications 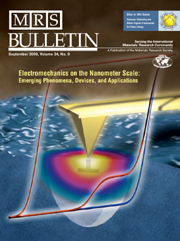