A group of materials researchers has participated in Congressional Visits Day in Washington, DC, this spring, organized by the Materials Research Society (MRS). The purpose of this annual activity is for constituents to discuss with members of the US Congress the importance of sustained funding for basic research and the impact that funding has, for example, on the economy and national security. Materials researchers met with House and Senate leadership and Congressional members who can influence decisions on research funding.

On May 8, 2018, the researchers met with legislators or their staff, covering 17 states. In many cases, the researchers found that the legislators already supported funding for R&D in science and were aware of the materials field. In some cases, the field was new to the staff, who then welcomed more information. According to Damon Dozier, Director of Government Affairs for MRS, while legislators express support for the required funding, their conviction does not necessarily translate all the way through the appropriations process. The resounding message from the legislators during Congressional Visits Day was for their constituents to continue bringing “stories” of the successful outcome of such funding, which helps the legislators make their case during budgeting deliberations.

Fortunately, for FY 2018, the appropriation levels granted to the Office of Science in the US Department of Energy (DOE) and specifically for the Advanced Research Projects Agency-Energy were agreeable to MRS. DOE received a 16% increase over FY 2017 through the 2018 omnibus bill signed by the administration in spring this year.

The visiting constituents, however, want more. Ilke Arslan met with legislative staff members in the offices of both senators in her state of Illinois as well as the office of her district house representative. While all three offices have been steady—and sometimes zealous—advocates for funding of the physical sciences, Arslan took the opportunity to further educate them about the need for increased funding for biomaterials. This can be done through the National Institute of Biomedical Imaging and Bioengineering (NIBIB), a department within the National Institutes of Health (NIH). 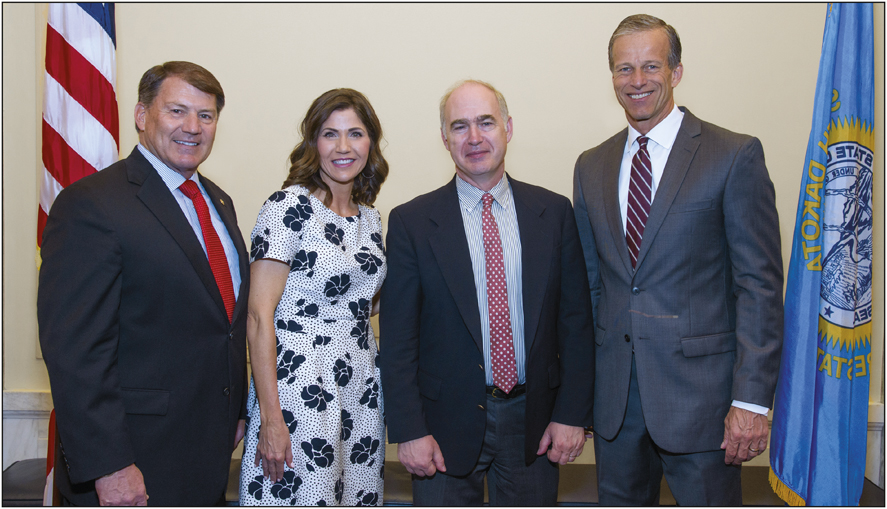 By way of relating materials research to medical research, Arslan, as well as the other participants, pointed to the development of tools, instruments, and emerging technologies that can be applied to a broad range of biomedical and healthcare problems. “Increased funding for NIBIB will allow critical work in the areas of basic research, precision medicine, applied science technology, and biomaterials,” they said.

Arslan is otherwise enthusiastic about the support she found: Illinois Senator Tammy Duckworth had already requested budget numbers even higher than those proposed by MRS for DOE, the National Science Foundation, the Department of Defense, and the National Institute of Standards and Technology; and Illinois Senator Dick Durbin advocates for 5% growth every year.

In Steve Smith’s visit with his senators from the state of South Dakota, Smith commended Senator Mike Rounds for giving the commencement address at his institution, South Dakota School of Mines & Technologies, where the senator specifically called for federal support for research. Rounds is an advocate for materials research. The senator focuses on R&D in DOE and the Department of Defense, and the Sanford Underground Research Facility in Lead, S.D., is particularly important to his office. Smith discussed the materials relevance of this neutrino observatory with Rounds’s legislative aide, Logan Penfield. Smith also talked about the success of federally funded research and related South Dakota startup companies VRC and Trion Energy, which are based on materials research.

Along with biomaterials, the group of constituents encouraged their legislators to support a concerted effort on quantum materials, an initiative which has since been passed by the House Science Committee. Some of the researchers also discussed the benefits of research in artificial intelligence (AI) relevant especially to materials.

Senator Bob Corker of Tennessee—who serves on the Senate Budget Committee—told his constituent Joshua Caldwell that AI and quantum information issues are “a big deal.” However, Corker said, “When the roof falls in [on the US fiscal status], basic and fundamental science will be one of the first wave of cuts.” Corker implied that his last major issues before his pending retirement will be this budget appropriations cycle.

Caldwell also found much support for basic research from his representative, Jim Cooper. The congressional representative told Caldwell that while he voted for the budget, he was extremely concerned about long-term funding. Caldwell mentioned that investment in science pays for itself many times over. “Every interest group says that,” Cooper said, “but I do agree that science is the only one that can back that comment up with hard data.”