Often outshined by diamond, cubic boron nitride (c-BN) is nevertheless an impressive material. In a handful of important ways, c-BN even has an edge: a wider bandgap, more resistance to oxidation due to a passivating layer of durable boron oxide, and acceptance of both p- and n-type dopants, compared with diamond’s acceptance of only p-type. The promise of exploiting these properties in future electronics makes clear the need for robust processing of BN.

Researchers at North Carolina State University have developed a method of fabricating phase-pure c-BN at ambient temperature and pressure in air—via a new phase of BN (named Q-BN) with its own exciting properties. Jagdish (Jay) Narayan led a team that extended previous, similar work on carbon into the BN material system. Narayan had a hypothesis that he could tweak the phase-changing behavior of carbon to directly convert graphite to diamond, bypassing the thermodynamic barrier by taking a “scenic route” through kinetics. Then, because carbon and BN are material cousins, he thought he could do the same for converting hexagonal BN (h-BN) to c-BN. This work is published in a recent issue of the Journal of Applied Physics (doi:10.1063/1.4948688).

With a 20-ns pulsed laser, liquid BN was undercooled by more than 700 K. Upon quenching, Narayan and his team observed a new phase, which they named, appropriately, Q-BN. The critical parameter in this process, in order to kinetically drive the transformation, is time: “We do it so rapidly the system is not able to equilibrate,” says Narayan. 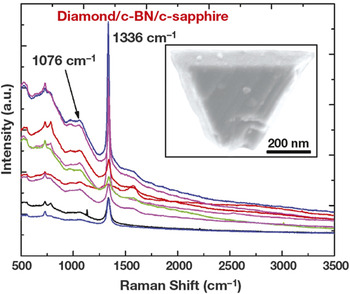 The team found that an intermediate undercooling of liquid h-BN resulted in c-BN directly, while a deeper undercooling resulted in the new Q-BN phase. By varying process parameters, the team was also able to nucleate and grow c-BN nanocrystallites in Q-BN. Upon further exploration, the team found they could grow c-BN thin films and nanoscale dots and needles, control twinning defects in c-BN, grow epitaxial diamond/c-BN and c-BN/diamond heterostructures, and give the Q-BN a semiconductor character, thereby opening up an even wider range of manufacturing possibilities for the process. Graduate student Anagh Bhaumik and postdoctoral research associate Weizong Xu carried out the characterization of the Q-BN phase, including Raman spectroscopy, HRTEM and EELS. Among other things, they determined that Q-BN’s atomic density is higher than that of c-BN, which suggests increased hardness. Because Q-BN is isostructural to Q-carbon, Narayan expects a hardness greater than that of diamond—comparable to the 17% greater hardness of Q-carbon over diamond that he reported previously.

The next step is to dope the materials, create a p-n junction, and start moving toward more complex devices. “The beauty of this [process],” says Narayan, “is that you can deposit these diamond/c-BN layers on heat-sensitive substrates, like polymers,” which would then lead to uses in flexible electronics and other advanced devices.