Researchers have found a way to remove toxic chemicals from the sea using polystyrene (PS)—which is an abundant, undesirable waste product in the environment, arising from packaging, cutlery, and other disposable objects that are used on a daily basis. This leads to many problems, and recycling of PS is still limited. A collaborative effort between researchers in Brazil and the UK has now found a valuable application for this waste polystyrene—to degrade toxic and carcinogenic dyes such as Rhodamine B (RhB) through photocatalysis. This work was reported in a recent issue of ACS Applied Materials & Interfaces (doi:10.1021/acsami.7b19834). 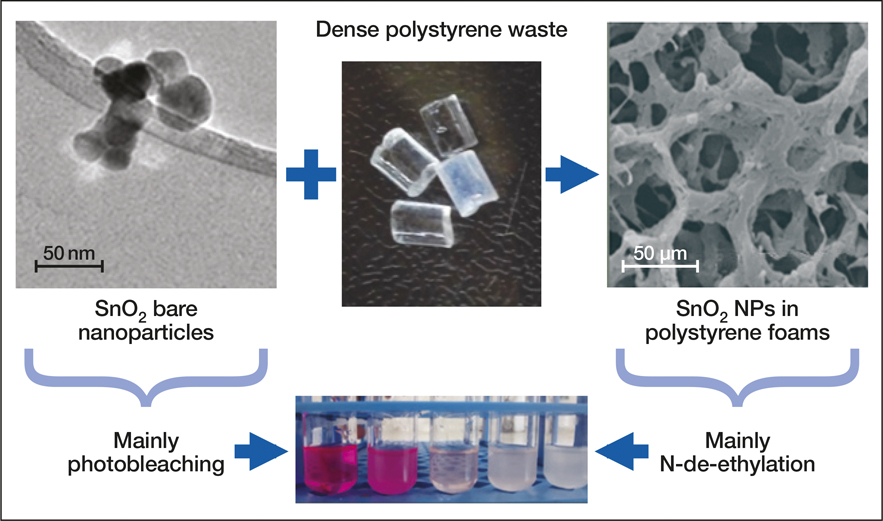 Nanofoams of PS and tin oxide (SnO2) were developed through a thermally induced phase-separation process combined with lyophilization, where the solvent is frozen and converted into vapor without going through the liquid phase. The concentration of PS in solution affects the strength of the resulting nanofoam. A 1% PS concentration in a cyclohexane solvent did not result in a stable nanofoam. Therefore, 2.5% and 5% solutions were employed to generate the stable nanofoams that are essential for the photocatalytic activity required to break down the dyes. This fabrication method has previously only been demonstrated to form oxide-based nanofoams. “Our article describes the fabrication and applications of new and exciting second-generation systems, which are now functional nanocomposite (polymer and oxide) foams,” says Rodrigo J. de Oliveira from Universidade Estadual da Paraíba, who is a lead researcher of the study. X-ray diffraction results revealed that polystyrene maintains its amorphous nature and the SnO2 takes an ordered form. The highest surface area was observed for the foam synthesized at 700°C, and the highest particle size was observed at 900°C. Transmission electron microscopy confirmed the formation of the nanofoam.

The porous structures of the nanofoams offer more active catalytic sites due to the favorable reaction of OH radicals on the foam surface, and the dye molecules enable efficient degradation. Furthermore, the foam from the waste material can be reused up to four times without compromising the photocatalytic activity. However, loss of efficiency is observed with the fifth cycle. “As this work has established the proof of principle, we are now looking for more stable systems such as polymer/gold, from the catalytic point of view,” Oliveira says.

Hicham Idriss, a research fellow at the Saudi Basic Industries Corporation (SABIC), appreciates the study. “The article deals with using styrene foam (commonly called Styrofoam) as support for a wide-bandgap semiconductor for dye degradation. The work is sound and convincing. However, the wide-bandgap semiconductor used, SnO2, is only active under UV, making its potential for application very limited,” he says.