Researchers have developed an ultra-tough graphene film that can be inexpensively fabricated at near-room temperature. This breakthrough in making functional graphene-based materials has been demonstrated by an international research team led by Qunfeng Cheng of Beihang University, China, and Ray H. Baughman of The University of Texas at Dallas. The work is published in a recent issue of Proceedings of the National Academy of Sciences (doi:10.1073/pnas.1719111115).

The motivation for this work is to devise a low-temperature process for making macroscopic graphene-based nanocomposites that better exploit the ultrahigh strength of single-layer graphene. According to Cheng, the researchers were inspired by a highly rigid substance that already exists in nature: “Nacre, also known as mother-of-pearl, consists of parallel platelets that are glued together by thin layers of organic substances, similar to the way bricks in a wall are held together by mortar.” To mimic this architecture, the researchers utilized stacked graphene platelets as building blocks and interconnected them with molecular linkers.

The synthesis method involves a sequential bridging technology. First, 10,12-pentacosadiyn-1-ol (PCO) molecules were grafted onto the edges and basal planes of graphene oxide (GO) sheets (the precursor of graphene sheets) by covalent bonds between the hydroxyl groups of PCO and the carboxylic groups on GO. Adjacent PCO molecules were subsequently polymerized by exposure to UV light, stitching neighboring GO sheets together. This as-formed GO network was converted to a graphene scaffold and further strengthened with two linkers: 1-pyrenebutyric acid N-hydroxysuccinimide ester (PSE) and 1-aminopyrene (AP). Their aromatic rings provide π–π interaction that allows them to adsorb onto graphene platelet surfaces. PSE and AP molecules then linked together and tightly locked the graphene sheet assembly. 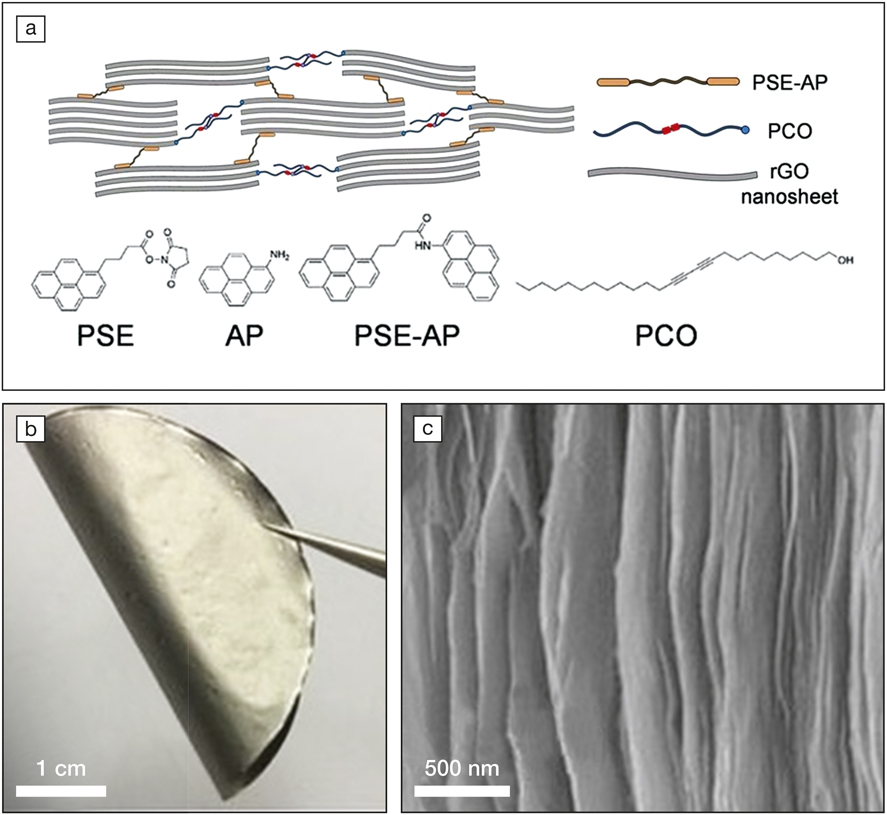 (a) Schematic showing the structure of the cross-linked graphene network. PSE is 1-pyrenebutyric acid N-hydroxysuccinimide ester; AP is 1-aminopyrene; PCO is 10,12-pentacosadiyn-1-ol; and GO is graphene oxide. (b) A digital photo of a piece of the ultra-tough graphene film. (c) A scanning electron microscope image displaying the nacre-like microstructure constructed by interconnected graphene sheets. Credit: Proceedings of the National Academy of Sciences.

Due to the unique cross-linked architecture, the obtained graphene films exhibited ultrahigh strength and toughness. With an average tensile strength of 944 MPa and a mean toughness of 20.6 MJ m–3, these cross-linked graphene sheet films are “… about as strong as the carbon fiber composites used in airplanes, and tougher than any carbon composite having isotropic in-plane properties,” Baughman says. Another striking feature of the synthesized films is their ultra-high gravimetric strength (strength divided by density) of 460 ± 19 N∙m∙g–1, higher than metal alloys such as steel and Ti alloys.

The researchers further elucidated the mechanism of the ultrahigh mechanical strength through in situ Raman spectroscopy. By studying the strain dependence of the frequency of graphene’s G peak in Raman spectra, it was concluded that the effectiveness of the molecular linkers in distributing local stress to the entire graphene network played an important role in preventing rupture.

“Ultimately, this synthesis technique may enable the fabrication of new materials with properties that cannot be achieved by nature or conventional processing techniques,” says Tony Tomsia from Lawrence Berkeley National Laboratory, and was not involved in the study. “This work also opens a new avenue to make nacre-like nanocomposites with exceptional mechanical properties,” Tomsia says.

The research team is moving forward to extend their demonstrated synthesis protocol to materials beyond graphene, such as mixtures of graphene, carbon nanotubes, and carbon fibers. “Since inter-platelet bridges provide stresses that controllably vary the spacing between graphene planes, we might be able to tune the superconductivity that results from alkali-metal intercalation,” Baughman says.