Materials meet bioelectrical and -mechanical demands of the heart

Cardiovascular disease is the largest single cause of death worldwide. The World Economic Forum estimates total global costs from cardiovascular diseases (2010–2030) to be USD$20 trillion. The primary treatment for cardiovascular diseases is routinely taking a combination of drugs to reduce blood clotting and cholesterol levels. Unfortunately, this only alleviates symptoms in 50–70% of patients and has adverse side effects, such as unexplained muscle weakness, occasional pain, and weight loss. To improve the understanding of cardiac physiology and drug screening, researchers want to create better heart models, even patient-specific ones.

Another solution to treat heart disease is to develop biomaterials such as cardiac patches that can meet the biochemical/electrical/mechanical demands of the heart simultaneously to promote regeneration following cardiac infarction (more commonly known as heart attack) when blood stops flowing to some regions of the heart. Cardiac patches are formed from a mesh of biocompatible polymers with seeded cells and/or chemicals such as growth factors. They can be attached onto the surface of heart tissue to provide biochemical cues for regeneration. Also, the seeded cells in the patches may form electrical junctions with native cardiac cells to generate bio-electrical signals essential for growth.

These limitations motivated the research group led by Lino Ferreira at the University of Coimbra, Portugal, to engineer a piezoelectric scaffold environment for cardiac cells. They published the results of their work last fall in Biomaterials (doi:10.1016/j.biomaterials.2017.05.048). Pedro Gouveia, the first author of this article, says that their idea for the scaffold came from the “use of piezoelectric materials in mobile devices and how they can produce energy by exploiting environmental cues.”

The research group coated micro-poly(vinylidene fluoride-trifluoroethylene), or PVF, onto their scaffolds. PVF exhibits piezoelectrical properties, as discovered in 1969 by scientist Heiji Kawai, who was then at the Kobayashi Institute of Physical Research (Japanese Journal of Applied Physics, doi:10.1143/JJAP.8.975).

By analyzing confocal images and quantifying expression levels of connexin 43, a protein that indicates whether cells are forming electrical gap junctions to allow cell–cell communications and have healthy rhythmic contractions, the research group found that cardiac cells preferentially grew and aligned much better on their piezoelectric scaffolds than on the 2D polystyrene plate (Figure 1). The cardiac cells grew so well on the piezoelectric scaffolds that they generated 10–30 mV in electricity, enough to induce action potential, and had 3.5× more beats per minute.

The research group then demonstrated the high physiological relevance of their heart model by testing it with the drug norepinephrine, which modulates contractile activities of cardiac cells. As expected, with their heart models, when norepinephrine was administered, cardiac cells experienced contractions. The research group also demonstrated an inhibition of contractions with increasing dosages of propranolol, which blocks adrenergic receptors (the target of norepinephrine).

Stephanie Seidlits, an assistant professor researching regenerative medicine at the University of California, Los Angeles, who was not involved in this study, is excited about the utility of piezoelectric scaffolds for toxicity screening. “Cardiac tissue is highly sensitive to drug toxicity, and cultures used for in vitro screens do not reflect the properties of real heart tissue. The use of human-induced pluripotent stem cell (iPSC)-derived cardiomyocytes [cardiac muscle cells] means that toxicity screens could be personalized to some genetic characteristics of patients in the future,” she says.

Cardiac cells undergo huge deformations while the heart is beating. Consequently, the Young’s modulus of the heart tissues can vary between 0.02 MPa and 0.50 MPa, depending on whether the heart is at the systole (contraction) or diastole (relaxed) phase.

Recently, the research team led by Molly M. Stevens at the Imperial College London published an article in Advanced Functional Materials (doi:10.1002/adfm.201800618) on an auxetic conductive cardiac patch that stretches and contracts seamlessly with heart tissues. As the term “auxetic” suggests, the scaffold design has a negative Poisson’s ratio, which allows it to expand in multiple directions when subject to forces to meet the large mechanical deformations during the beating of the heart (Figure 2). 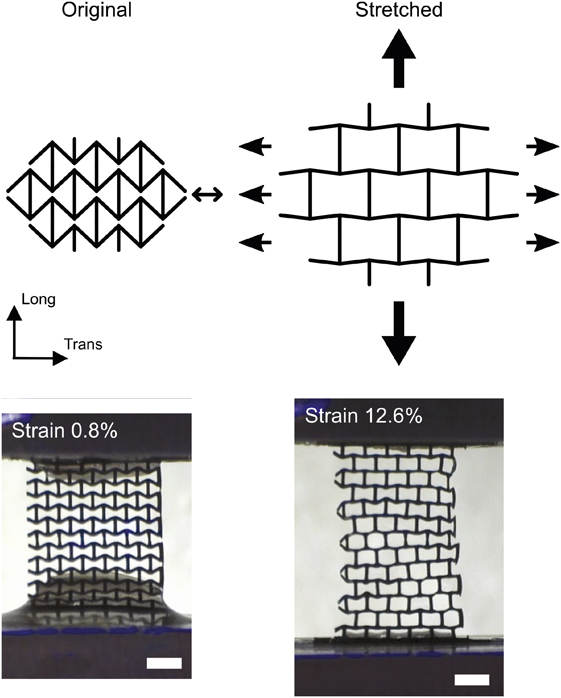 Figure 2. Most materials have a positive Poisson’s ratio. This means that when they are stretched longitudinally, they contract transversally. However, auxetic materials are defined as having a negative Poisson’s ratio, which allows them to expand in multiple directions. An example of stretching of the auxetic cardiac patch is shown where increasing strains result in expansion of the scaffold material. Scale bar is 1 mm. Credit: Advanced Functional Materials.

The auxetic property was found to improve the shear and indentation resistance of the cardiac patch, and it also stretched and conformed to native rat heart tissues. The research team observed promising results at day 14 after surgery, as the cardiac patch remained adhered and well integrated with rat heart tissue without eliciting any adverse fibrotic activities in vivo.

Shaochen Chen from the University of California, San Diego, who was also not involved in this work, commented that he is “glad they made this [auxetic cardiac patch] happen and the work is excellent.” He also added that with a 3D printing technique (see Advanced Functional Materials, doi.org/10.1002/adfm.201002022), the fabrication process could probably be faster and more precisely controlled. However, Stevens added that as their auxetic structure had a bilayer structure, their chosen fabrication technique was also appropriate.

Cardiovascular diseases present a huge monetary cost to society due to treatments, loss of working abilities, and mortality. Heart models that better mimic physiology can provide more accurate assessments of drug toxicity and enhance tissue engineering efficacy. Patches with improved mechanical properties can meet the biomechanical demands simultaneously with the biochemical/electrical needs of the heart to improve treatment outcomes.

Materials innovations have significantly impacted diagnosis and clinical treatment of heart disease. Recently, the Japanese government has given the green light for clinical trials of cardiac patches loaded with stem cells for heart regeneration, as reported by David Cyranoski in Nature (doi:10.1038/d41586-018-05278-8). An exciting area in the future for materials researchers is to synergize their creativity in materials designs with patient-derived stem cells to improve (personalize) drug screening and cardiac regeneration.