It was a cold winter night in Sheffield, England, when a cloaked beggar knocked on the doors of the local steel foundry seeking shelter. The benevolent crew took pity on the man and ushered the stranger in, offering the warm shop floor as makeshift quarters for the night. But a closer look at the self-described “tramp” would have revealed him to be no stranger or beggar. The man was Samuel Walker, a rival steelmaker from nearby Grenoside, and he was on a mission: to learn how to make what was then the finest steel in the world.

At least, that’s how the story was passed down to descendants of Benjamin Huntsman, owner of the factory and of the secret for making crucible steel.

While lore and legend tend to bend facts as they’re passed down through generations, they almost always contain some nugget of truth. In this case, there are two. Samuel Walker made indescribably rapid strides in producing crucible steel within a suspiciously short time. And in mid-18th century Sheffield, England, enterprising craftsmen would go to almost any lengths to gain a foothold in the burgeoning and lucrative market for high-quality steel. 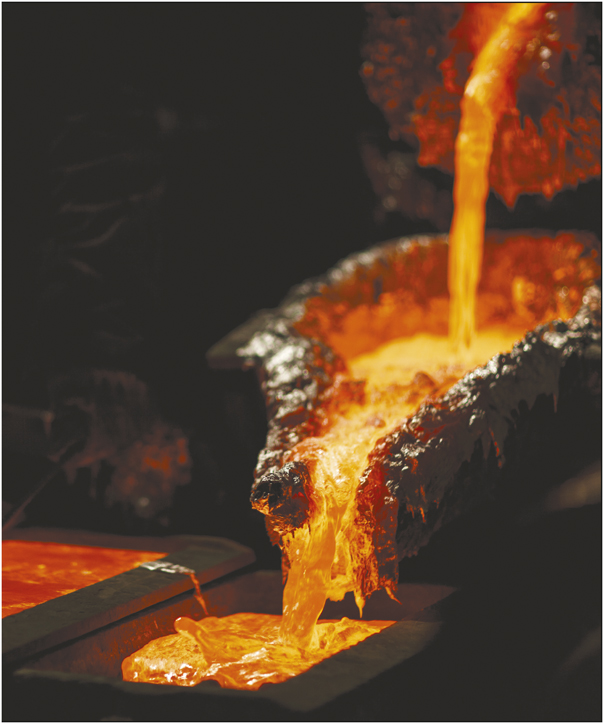 Benjamin Huntsman never set out to become the famed inventor of modern steel he’s known as today. A master clockmaker by trade, Huntsman had a simple purpose: to make better clock springs than those afforded by the highest-quality steel available to him then. From a materials engineering perspective, the problem was heterogeneity.

Even the best blister steel imported from Germany at that time lacked the microstructural uniformity that could keep small parts operating literally like clockwork. The steel was formed by diffusing carbon from charcoal into heated wrought iron over days or even weeks. While the added carbon improved the strength and hardness of the final product, the effect was, for the most part, only skin-deep. The hottest wood- and charcoal-fired furnaces couldn’t reach temperatures high enough to completely melt wrought iron. Most of the diffused carbon, therefore, never quite made it to the iron core. Even when small ingots of blister steel were forged together by hammering to form shear steel, the structure of the “sheared” material remained largely irregular. Charcoal also tended to introduce impurities, such as sulfur and phosphorus, which undermined steel’s desirable properties.

Huntsman would find a solution to the twofold problem of low heat and low purity in one game-changing material and one deceptively ordinary one.

Unlike the charcoal dust used to fuel the production of blister and shear steel, Huntsman used coke. More carbon-rich coke could actually burn hot enough to melt wrought iron. This enabled carbon from the coke to spread evenly through vats of molten iron. Coke was also better than charcoal at reducing iron oxide in steel production. Though first applied to the manufacture of steel as early as 1709, coke wouldn’t be in vogue for steelmaking until production methods gradually improved in the following decades.

Shards of glass, meanwhile, were the secret sauce in Huntsman’s recipe. When added to the crucibles that hosted the steelmaking reaction, glass would soak up impurities from the molten metal and then be skimmed off the surface after firing. It was, according to Huntsman family lore, the step Samuel Walker most desired to glimpse that Sheffieldian winter night. Walker was hardly the only one to resort to furtive means in this quest.

The French metallurgist Gabriel Jars, by government commission, descended into Sheffield to acquire the methods of steel manufacture earning the town acclaim in continental Europe. Likely France’s first international industrial spy, Jars became well acquainted with the use of coke through his travels to Sheffield and other English towns. But on the use of glass, his diary reveals that he knew only that a “flux” was added to Huntsman’s crucibles. The composition of that flux, he lamented, remained a secret.

Huntsman never patented his process. That, many believe, is what made him the frequent target of industrial spies from his native England and abroad. Some historians attribute Huntsman’s decision to his deeply religious beliefs. As a devout member of the Society of Friends (Quakers), Huntsman shied away from the public’s eye and may have found any notoriety gained through his success to conflict with his Quakerism. He even turned down an invitation to the prestigious Royal Society for his work on crucible steel.

Thanks to Huntsman, Sheffield would thrive as the world’s hub for modern steel production—particularly with the advent of mass production techniques. Though some debt of gratitude is no doubt owed to the likes of Walker and Jars. Their efforts to appropriate mastery of steel, dubious as they were, represent a recurring element in the story of how the Industrial Revolution was spurred in countless ways through other trades and enterprises.