Energy-storage devices that use layered electrodes are of great interest. Batteries are relied on for their high charge storage capability owing to ion intercalation into electrodes. Capacitors, on the other hand, output charge faster due to ion adsorption onto electrode surfaces. Hybrid energy-storage devices reap the benefits of both. Now Veronica Augustyn’s research group from North Carolina State University has examined another important property of layered energy-storage electrodes: their mechanical behavior during charging and discharging. The researchers used this insight to show how water embedded into a structure can transform its energy-storage behavior from battery-like to capacitor-like.

Since ion intercalation significantly strains materials, outstanding battery electrode structures must bend and expand with relative ease to accommodate ions in order to offer high power densities and rate capabilities. While observing and quantifying local mechanical flexibility is tricky, an appropriate probe characterization technique, coupled with electrochemical cycling, can provide this information. The team has designed an in operando method using atomic force microscopy (AFM) to assess the charge mechanism and resulting strain-induced deformations in tungsten oxide (WO3) electrodes, and compared their response to hydrated, two-dimensional tungsten oxide (WO3·2H2O) electrodes that contain water. They reported their findings in a recent issue of ACS Nano (doi: 10.1021/acsnano.8b02273).

“The exciting aspect about the correlation between the electrochemical current and electrode deformation measured via AFM is that it allows us to probe electro-chemo-mechanics at the nanoscale,” Augustyn says. “This was particularly helpful in elucidating the unexpected role of water incorporated into the structure of the hydrated form of tungsten oxide.”

“We found that the water layers in hydrated tungsten oxide do two things,” says Ruocun Wang, a doctoral student in Augustyn’s laboratory and lead author of the article. “First, they minimize deformation and reduce expansion and contraction of the material as ions move in and out. Second, the water layers make the deformation more reversible, meaning that the material returns to its original dimensions more easily,” he says.

The researchers used a platinum-coated AFM cantilever to measure deformations in tungsten oxide electrodes while they applied an electrochemical cycling experiment with a sulfuric acid electrolyte. The shapes of charge–discharge cyclic voltammetry curves corresponded with the mechanical deformation rate of the respective electrodes. Of note, electrochemical results contrasted the pseudocapacitive-like behavior of hydrated WO3 (fast, reversible surface reactions) against the battery-like intercalation process in its anhydrous counterpart (slow, diffusion-limited process). 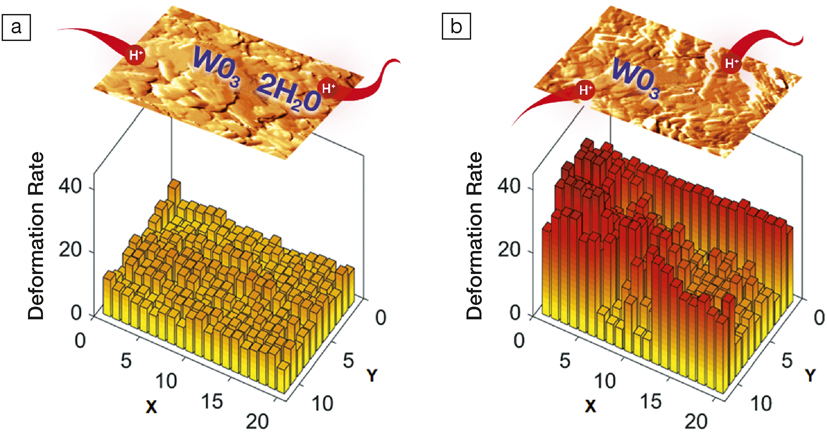 Scanning probe microscopy captures the flexibility of tungsten oxide electrodes during electrochemical cycling and highlights the relative ease with which ions enter and exit the hydrated electrode form (a) compared to the anhydrous electrode (b). Credit: Veronica Augustyn et al.

Anhydrous tungsten oxide experienced significant strain in order to intercalate the protons into its structure, and the asymmetrical profile of its charge–discharge cycling behavior mirrored its AFM-detected mechanical deformation rate. Structural analysis of the hydrated material showed that water molecules in the interlayer spacing separated the layers of corner-sharing WO5(OH2) octahedra and confined the deformation to two dimensions. This, in turn, endowed the hydrated form with greater flexibility and allowed ions to easily move in and out of the electrodes during cycling.

Albert Davydov of the National Institute of Standards and Technology, who was not involved in this study, says, “In situ correlation of reversible redox activity with the mechanical deformation, together with high spatial and temporal resolution of the AFM dilatometry, has unambiguously inferred the proton exchange mechanism in hydrated versus anhydrous tungsten trioxide. I can envision how this methodology can be extended to gain an insight into the reaction mechanisms in other industrially relevant electrochemical processes, such as catalysis or corrosion.”

Other members of the research team are affiliated with Oak Ridge National Laboratory and Texas A&M University.