Traditionally, battery architectures include a layered assembly of anodes, cathodes, and a separator. In Li-ion batteries, the thickness of each component, which is typically ∼10 μm, dictates the charging rate of the battery governed by the diffusion of lithium ions. Now researchers have designed a so-called three-dimensional (3D) battery fabricated through a novel bottom-up approach, where all of these components interpenetrate and in which the thickness of each layer is just 10 nm. This makes it three orders of magnitude thinner than the mainstream batteries currently on the market. Since diffusion time significantly depends on the size of each component, this design results in orders of magnitude faster charging times. The 3D battery design is a radical deviation from mainstream battery design concepts. The concept sounds straightforward, but was complicated to achieve in practice.

According to U.B. Wiesner of Cornell University, lead researcher in this study that was published in a recent issue of Energy & Environmental Science (doi:10.1039/c7ee03571c), thinner batteries have been demonstrated previously that have increased power density but reduced energy density. With the 3D design, the thinner components promote fast ion transport while also offering increasing charge storage. 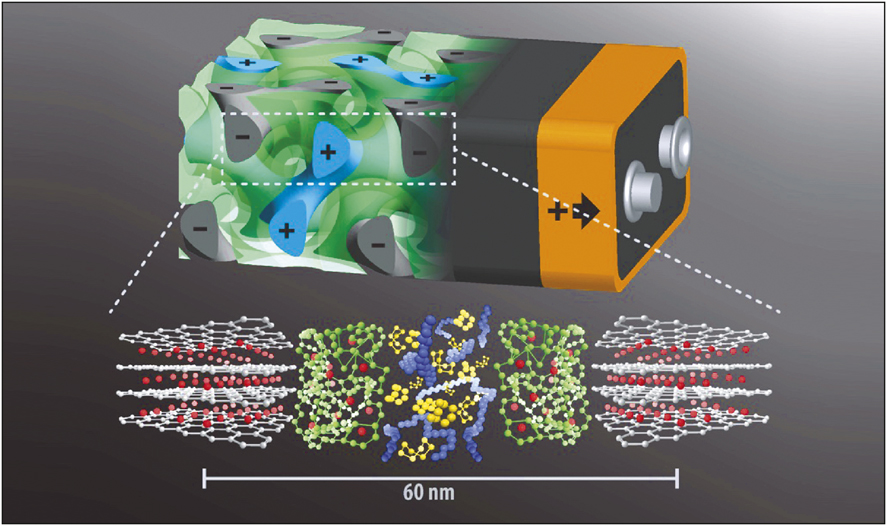 Rendering of the 3D battery design with anode (gray) and cathode (blue) interpenetrating each other separated by the separator layer (green). Bottom: Molecular structures of anode, separator, and cathode (same color code) materials with lithium ions (red) shuttling back and forth. Scale bar indicates that the entire sandwich has a thickness of only about 60 nm. Credit: U. Wiesner.

In this bottom-up nanofabrication, approach the porous carbon anode is deposited first. The porous structure of the layer was confirmed through a scanning electron microscope. The polymer electrolyte poly(phenylene oxide) is coated afterward. The last layer (cathode) of two interpenetrating network mesopore channels is deposited, which is a composite of sulfur and poly(3,4-ethylenedioxythiophene)(PEDOT). The redox-active functionality with a discharge voltage of 2–2.5 V versus lithium and infiltration at moderate temperatures (155°C) made the selection of sulfur an easy choice in comparison with the standard lithium cobalt oxide cathode. PEDOT is employed because of its high electronic conductivity. With these components in place and in the interpenetrating configuration, the battery could operate at a stable open-circuit voltage and a well-defined discharge plateau at 2.7 V with a reversible capacity of 0.2 mA h cm–2. As an illustrative comparison, a conventional battery design with a similar capacity would occupy an area that is 4700 times larger.

Étienne Knipping, a senior researcher at Leitat Technological Center in Barcelona, says, “The expansion of small electronics encourages the development of smaller batteries [with greater performance]. This requires a different way of designing a battery such as the 3D architecture that [maximizes] the material’s capacity in a limited volume. In this work, the authors found an elegant bottom-up, self-assembly process to fabricate a 3D carbon/sulfur battery with encouraging performance. Their results provide essential insights for the improvement of microbattery development.”