A joint research team led by Huiqiao Li of Huazhong University of Science and Technology, Yi Cui of Stanford University, and Qingfeng Sun of Zhejiang A&F University, has developed a carbon-scroll strategy that effectively helps stabilize silicon nanoparticles in Li-ion batteries. Si is a high-capacity, but highly unstable, anode material for Li-ion batteries. With a high Si content of 84.5 wt%, electrodes compromising Si nanoparticles mixed with carbon nanotubes (CNTs) and wrapped in carbon sheets exhibited consistently high capacity above 2000 mAh/g over 300 consecutive charge-discharge cycles. This performance was in sharp contrast to a bare Si nanoparticle electrode that displayed rapid capacity loss. This work was published in Energy & Environmental Science (doi:10.1039/c9ee02615k). 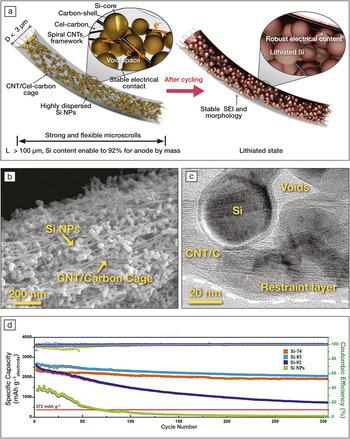 The researchers discovered that the carbon-scrolled Si nanoparticles served as highly stable anode materials in Li-ion batteries. This characteristic is remarkable because Si has notoriously poor stability in Li-ion batteries due to ∼300% volumetric expansion upon lithiation (Li+ incorporation), which leads to structural disintegration. This drawback is exacerbated when the Si content is high. By contrast, the carbon-scrolled Si nanoparticles, having a Si content as large as 84.5 wt%, consistently exhibited charge-storage capacity greater than 2000 mAh/g over 300 charge-discharge cycles. In comparison, the capacity of an anode consisting of bare Si nanoparticles rapidly decayed to 54.6 mAh/g under identical testing conditions.

The excellent cycling stability of the carbon-scrolled Si nanoparticles was attributed to three factors. First, the voids among the highly dispersed Si nanoparticles in the carbon scrolls accommodated the significant volumetric deformation during lithiation, minimizing pulverization and disintegration. Second, the carbon wrapping around the Si nanoparticles, along with the presence of CNTs, formed robust conductive pathways that reduced the electrical resistance. Third, the elastic carbon wrapping not only suppressed the structural breakdown of the Si-nanoparticle anode, but also prevented the nanoparticles from detaching from CNTs that caused the loss of active materials.

Guiyin Xu, a battery researcher at the Massachusetts Institute of Technology, says, “The silicon-carbon composite electrodes with the controllable silicon content, excellent flexibility, high initial coulombic efficiency show great potential for flexible and durable electronics.” Xu was not involved in this study.

The research team has confirmed that the topological transformation of cellulose is universal. Li says, “Similar results can be achieved with appropriate regulatory parameters when different materials, tin nanoparticles for example, are used to replace silicon nanoparticles, which provides a good opportunity to develop functional composites for different applications.”