Bioelectronics-based computing uses communication between cells through ion exchange to encode and decode information. Brain-machine interfaces establishing a connection between the human brain and an external device are expected to be the future of communication as they would provide accelerated information channeling, long-term data storage, and enable the handling of a large amount of data. Similar to neural networks, the ultimate bioelectronics interface will employ artificial intelligence with biology to continuously sense and process information at discrete locations.

To this aim, the first requirement is to develop suitable interfaces that receive and transmit signals between biological entities and synthetic materials. To allow for efficient bridging, these materials should be good conductors, biocompatible, and applicable to many functions. Thin III-nitride electrodes based on GaN, AlN, or AlGaN are promising options as they are inert, scalable to mass production, and can be functionalized.

In work published in a recent issue of Nanoscale (doi:10.1039/c8nr03684e), the research group of Albena Ivanisevic at North Carolina State University has explored how nanostructured GaN thin films can encode the regulatory response of a model organism, the yeast Saccharomyces cerevisiae. Yeast cells are particularly suitable for this preliminary work as they are robust and can be cultured in a matter of hours.

The first key parameter measured is adhesion of the cells, achieved by coating the GaN films with molecules from the growth medium. Then, the films are functionalized using a UV treatment in a controlled atmosphere and the cell response is assessed again. In the presence of oxygen, a large number of negative species such as free electrons, OH– and O2– ions increase the surface charge. As a result, the cells tend to cluster into groups of 6–8 cells, which is twice more than in the absence of functionalization. 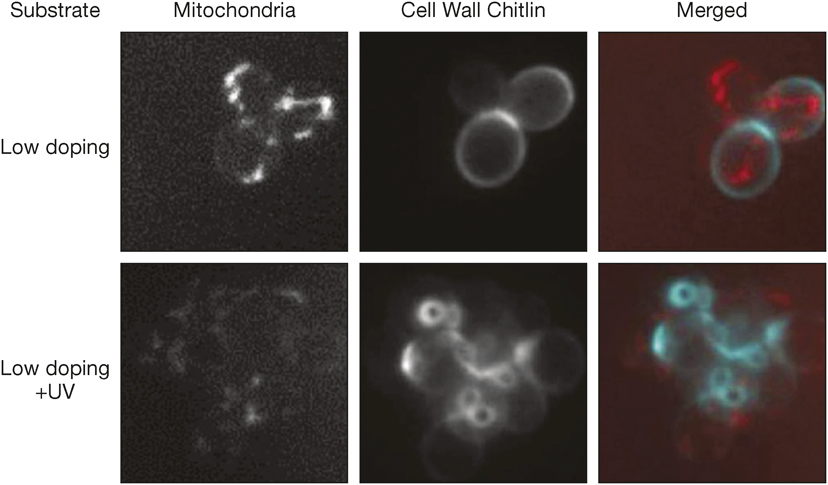 Response of Saccharomyces cerevisiae before and after increase in surface charges by UV treatment, showing decreased mitochondrial activity and increased chitin expression by the cells. Credit: Nanoscale.

In addition to this macroscopic behavior, the yeast cells exhibit hyperoxia (a state when they are exposed to very high levels of oxygen) after the UV treatment in the presence of O2. This state corresponds to changes in cell gene expression and cell polarization. The surface functionalization therefore directly influences the flux of ions across the cell’s membrane. The impact of the substrate topography and surface charge and chemistry on the response of the yeast could then be used to encode information at the molecular level.

“This is our initial report and we are exploring a number of parameters we can change, both in terms of materials properties as well as experimental in vitro design. We plan to carry out further analysis to understand genetic changes as a result of our interfacial interactions,” Ivanisevic says.

Ciro Chiappini from the Nanomaterials and Biointerfaces Laboratory of King’s College London, UK, who did not take part in the study, is excited by the possible follow-up studies. He is expecting the development of useful ways of controlling the response of excitable cells if a similar strategy is applied to mammalian cells. Chiappini says that “a similar approach has been recently shown by Bozhi Tian’s group at The University of Chicago … to be extremely versatile to stimulate activity in neurons. Also, coupling these strategies with substrate topography such as nanoneedle arrays could be a sophisticated means for combined intracellular stimulation and sensing.” But to fulfill this potential, he says, “it would be important to first evaluate the toxicity of the photoinduced reactive oxygen species to primary mammalian cells.”