Italianerie: Transculturality, Co-creation and Transforming Identities between Italy and Asia 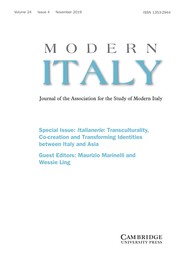