Special Issue dedicated to the work and memory of Professor Hazel M. Prichard (1954–2017) 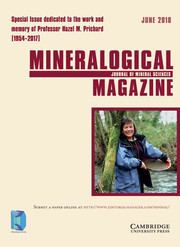