GaN CVD Reactions: Hydrogen and Ammonia Decomposition and the Desorption of Gallium

Isotopic labeling experiments have revealed correlations between hydrogen reactions, Ga desorption, and ammonia decomposition in GaN CVD. Low energy electron diffraction (LEED) and temperature programmed desorption (TPD) were used to demonstrate that hydrogen atoms are available on the surface for reaction after exposing GaN(0001) to deuterium at elevated temperatures. Hydrogen reactions also lowered the temperature for Ga desorption significantly. Ammonia did not decompose on the surface before hydrogen exposure. However, after hydrogen reactions altered the surface, N15H3 did undergo both reversible and irreversible decomposition. This also resulted in the desorption of N2 of mixed isotopes below the onset of GaN sublimation. This suggests that the driving force of the high nitrogen-nitrogen bond strength (226 kcal/mol) can lead to the removal of nitrogen from the substrate when the surface is nitrogen rich. Overall, these findings indicate that hydrogen can influence GaN CVD significantly, being a common factor in the reactivity of the surface, the desorption of Ga, and the decomposition of ammonia.

For a model of GaN CVD processes to be applicable over a wide range of conditions, the chemistry model must utilize accurate rate constants. However, this first requires identification of the reactions and the reaction products formed on the deposition surface and in the gas phase. This study has revealed relationships between reactions of the hydrogen carrier gas, Ga desorption, and ammonia decomposition on GaN. Shown in equation 1, this was achieved using

isotopic labeling to distinguish nitrogen in ammonia from that in the substrate and the carrier hydrogen from that originating in ammonia.

D2 reactions were performed in a small cold-wall batch reactor connected directly to a UHV (ultra-high vacuum) surface analysis chamber via isolation seals. N15H3 reactions were conducted in UHV and consisted of 1×10−7 Torr exposures lasting in duration from 30 to 300s. The UHV chamber was equipped with x-ray photoelectron spectroscopy (XPS), low energy electron diffraction (LEED), and mass spectroscopy for temperature programmed desorption (TPD). The mass spectrometer was enclosed in a liquid nitrogen cooled shroud with an opening of only 1.5mm approximately 5mm in line of sight of the GaN(0001) surface. The GaN(0001) surface used in this study had a hexagonal LEED pattern with sharp spots [Reference Bermudez, Koleske and Wickenden1] and a high contrast to background (figure 1). Although the symmetry and orientation of this excellent diffraction pattern remained unchanged over the entire surface (1cm2), XRD and TEM have been used to show that this substrate was polycrystalline, as found for other GaN films.

Figure 1. LEED photos before and after D2 reactions. The surface did not decompose ammonia irreversibly in UHV until after reaction with D2.

TPD experiments revealed that ammonia adsorbed only reversibly on this surface in UHV. However, deuterium exposures at 2 Torr and 1200K for 120s in a chamber adjoining the UHV chamber altered both the LEED pattern and the surface reactivity. The resulting LEED spots were diffuse and had fine structure consistent with the presence of steps in multiple domains [Reference Gronwald and Henzler2] as shown in figure 1. In addition, this new surface did adsorb ammonia irreversibly as well as reversibly, as discussed in the next section. Dramatic effects of hydrogen on GaN morphology and growth have been observed previously. [Reference Hashimoto, Amano, Sawaki and Akasaki3]

After stopping the reaction, evacuating at 1200K, and then cooling the substrate to room temperature, TPD detected only D2 , HD, and Ga, (figure 2) above the normal desorption of Ga and N2. [Reference Ambacher, Brandt, Dimitrov, Metzger, Stutzmann, Fischer, Miehr, Bergmaier and Dollinger4] HD likely results from the reaction of D with H left in the bulk from the CVD process. The desorption state at 825K before the onset of the much greater hydrogen desorption is suggestive of dihydrogen being formed from hydrogen atoms adsorbed on the surface (adatoms) followed by diffusion of hydrogen from the GaN solid (equation 2). The 825K desorption is 200 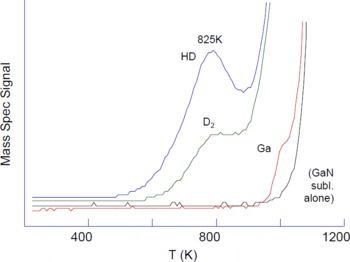 Figure 2. TPD spectra after D2 reaction and evacuation at 1200K.

deg.C higher than reported on GaN(0001) previously. [Reference Shekhar and Jensen5] However, that surface was not pretreated with hydrogen at elevated temperatures and was less reactive consequently. In another case, the desorption of hydrogen from polycrystalline GaN at slightly lower than 800K was reported. [Reference Chiang, Gates, Bensaoula and Schultz6]

The spectra in figure 2 demonstrate that the rate of hydrogen diffusion from GaN is relatively slow, since the desorption of D2 and HD is clear evidence that not all of the hydrogen was removed during the 1200K evacuation prior to TPD. Consistent with the need for post-growth annealing thought to remove hydrogen from GaN for the activation of Mg acceptors, this implies equation 2 may be reversible at CVD pressures. Nevertheless, this alone does not prove conclusively that hydrogen adatoms can be formed from hydrogen coming from the GaN solid or from the gas-phase.

The appearance of Ga at a temperature below the onset for GaN congruent sublimation [Reference Ambacher, Brandt, Dimitrov, Metzger, Stutzmann, Fischer, Miehr, Bergmaier and Dollinger4] in figure 2 (equation 3) demonstrates that hydrogen exposures can lower the temperature

for Ga desorption. This also implies that hydrogen can react with the surface (equation 4),

removing surface nitrogen. One might assume this occurs via ammonia formation. However, sampling the chamber gas-phase during deuterium reactions with a mass spectrometer as well as attempts to condense reaction products on a liquid nitrogen cooled trap could not verify this.

In lieu of direct evidence of ammonia formation, it should be noted that a necessary prerequisite for the formation of ammonia is the dissociation of hydrogen (equation 5) and more

importantly, the availability of hydrogen adatoms for reaction on the surface. In principle, an isotopic exchange experiment exposing GaN to both H2 and D2 to observe HD in the reactor at a level above that evolved from the solid would be sufficient proof of hydrogen dissociation. Unfortunately, reaction on the heater alone produced HD at too high of a rate to be sensitive to only the GaN chemistry.

As an alternative, evidence of hydrogen adatom availability on GaN was obtained by performing a two-step experiment utilizing (1) hydrogen (D2) within the GaN substrate in conjunction with (2) ammonia adsorbed on the GaN surface. First, a reservoir of hydrogen was loaded in GaN by reacting with deuterium at 2 Torr and 1200K for 120s. The surface was then exposed to N15H3 at room temperature. The resulting TPD spectra are shown in figure 3. Although the signal was very low, the detection of mass 19 (N15H2D) as evidence of isotopic exchange between D atoms and N15H3 (equation 6) [Reference Shekhar and Jensen5,Reference Chiang, Gates, Bensaoula and Schultz6] demonstrates that hydrogen adatoms 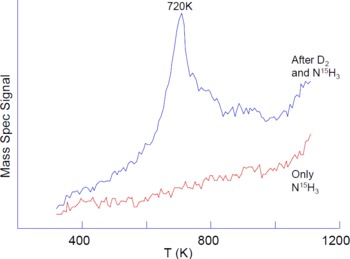 Figure 3. The desorption of N15H2D (mass 19) as evidence of D adatom availability on the surface for isotopic exchange with N15H3 after D2 dissociation.

resulting from hydrogen exposures are indeed available for reaction on the surface. In the absence of deuterium pre-reactions, additional experiments designed to test for artifacts showed that N15H3 exposure alone does not produce a mass 19 desorption peak (figure 3). Also, consideration of mass spec fragmentation patterns associated with N15 ammonia as well as the possible presence of N14 ammonia or water impurities shows that these species can yield a mass of 19amu only if they contain deuterium.

As noted in the previous section, ammonia is adsorbed both reversibly and irreversibly on GaN(0001) after hydrogen exposure at high temperature. The reversible reaction results in the desorption of ammonia above 850 K. This rather high temperature suggests ammonia first dissociates at room temperature or above as in equations 7 and 8. It is important to point out that N14H3 was not detected under any condition.

Lack of significant ammonia reformation until high temperatures allows hydrogen-hydrogen reactions to compete on GaN, resulting in the desorption of dihydrogen above 850K (equation 10). This is coupled with irreversible ammonia adsorption and as shown in figure 4, nitrogen-nitrogen reactions also become competitive on the surface at a temperature below the onset for GaN sublimation. The desorption of N15 2, N15N14, and N14 2 suggests displacement of nitrogen from the GaN14 substrate can occur when the surface is nitrogen rich as in equation 11. With the desorption of ammonia and hydrogen taking place at much higher temperatures, each of these results are quite different from those reported previously. [Reference Shekhar and Jensen5] Also, the desorption of dinitrogen was not detected previously, [Reference Shekhar and Jensen5] which is consistent with the minimal reactivity observed in the absence of hydrogen pretreatment. 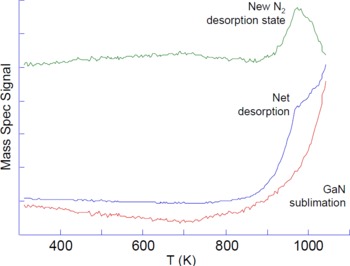 These reaction pathways are not entirely surprising when the well-known Haber-Bosch process [Reference Bottomley and Burns7,Reference Ertl and Prigge8] for ammonia synthesis is considered (equation 12). Although the reaction is

facilitated with a K-promoted Fe/Al2O3 catalyst, high nitrogen and hydrogen pressures are required to maintain the equilibrium in favor of ammonia. This is partly a consequence of the tremendous stability of N2, having a nitrogen-nitrogen bond strength of 226 kcal/mol. The results presented here show that this same driving force could be a factor in reversing the deposition of GaN; if growth conditions do not incorporate nitrogen adatoms and/or surface nitrogen fully, those in close proximity will have a propensity to form N2. Obviously, this points out the need to have precursor flow rates well matched to achieve a desired deposition-to-etch rate ratio in GaN CVD.

The formation of N14 2 reveals that N14 is certainly available for reaction and yet the desorption of N14H3 was not detected. Therefore, it is unlikely that equation 9 is reversed under the transient conditions inherent in a TPD experiment. However, this does not rule out the possibility of hydrogen adatoms removing surface nitrogen via equation 5 in conjunction with equation 4, given sustained hydrogen exposures as in CVD processes or the experiments described above.

The numerous chemical equations considered in this study can be summarized quite simply as shown in figure 5. Without the reaction of hydrogen to form steps (defects) on the surface, ammonia does not decompose in UHV. However, once ammonia decomposition takes place, yielding surface hydrogen in a sequence of reactions (proceeding from left to right), this reaction becomes chemically linked with hydrogen adatoms from carrier decomposition at every step in the sequence (pushing the reaction back to the left). Therefore, while conclusive proof of ammonia formation from the reaction of hydrogen carrier adatoms was not obtained in this study, fundamental chemical concepts (Le Chatelier’s principle) would suggest that hydrogen adatoms could be a significant factor in decreasing the rate of ammonia decomposition. Certainly in the extreme case, nitrogen may well be removed from the surface as ammonia via reaction with hydrogen adatoms from the carrier (reaction from right to left), lowering the Ga desorption temperature. Conversely, when the surface is rich in nitrogen, the driving force to make dinitrogen will offer an entirely different route for irreversible removal of nitrogen from the surface (reaction from left to right). Seemingly complicated, these interwoven reactions leading to contrasting sets of both deposition and etching reactions may also be viewed as part of the key to manipulating materials properties and qualities via careful selection of growth conditions.

Technical discussions with Jung Han are noted with appreciation. This work was performed at Sandia National Labs under DOE contract DE-AC04-94AL85000.