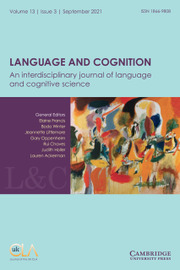 A research program in neuroimaging for an evolutionary theory of syntax

The Mirror System Hypothesis of Michael Arbib (2012), with respect to the cultural evolutionary origins of syntactic structure, allows to make a set of predictions about the neural mechanisms that govern the processing of modern human languages. Neuroimaging techniques may be employed to test these predictions and inform an evolutionary theory of language syntax. In this commentary, I will argue that future neuroimaging research needs in particular to: i) clarify whether linear sequential versus non-linear hierarchical structure differentially depend on mirror neurons as opposed to higher-order heteromodal cortices; ii) challenge current neuroscientific evidence on multilingualism: as it stands, syntactic processing appears to be mediated by the same neural mechanisms across languages, independently of cross-linguistic idiosyncrasies; iii) devise longitudinal studies of grammar acquisition in newborns and children; iv) recreate in the laboratory nearly-ecological conditions for the emergence of syntactic constructions through cultural and social interaction, and exploit the “experiment of nature” of pidgin and creole languages.

A research program in neuroimaging for an evolutionary theory of syntax
×

A research program in neuroimaging for an evolutionary theory of syntax
×

A research program in neuroimaging for an evolutionary theory of syntax
×
×