Journal of the History of Economic Thought - Latest issue

Latest issue of Journal of the History of Economic Thought 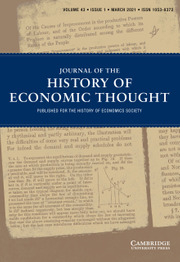