The Journal of the Gilded Age and Progressive Era - Latest issue 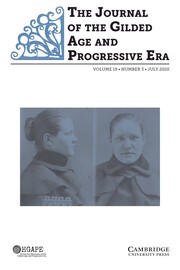