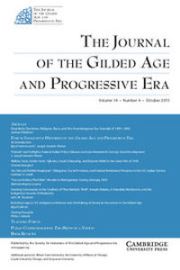 Forum: Indigenous Histories of The Gilded Age and Progressive Era

Public Commemoration: The Birth of a Nation