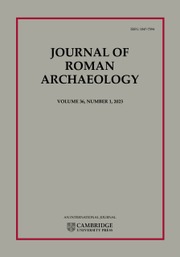 Animals in the urban fabric of Ostia: initiating a comparative zooarchaeological synthesis 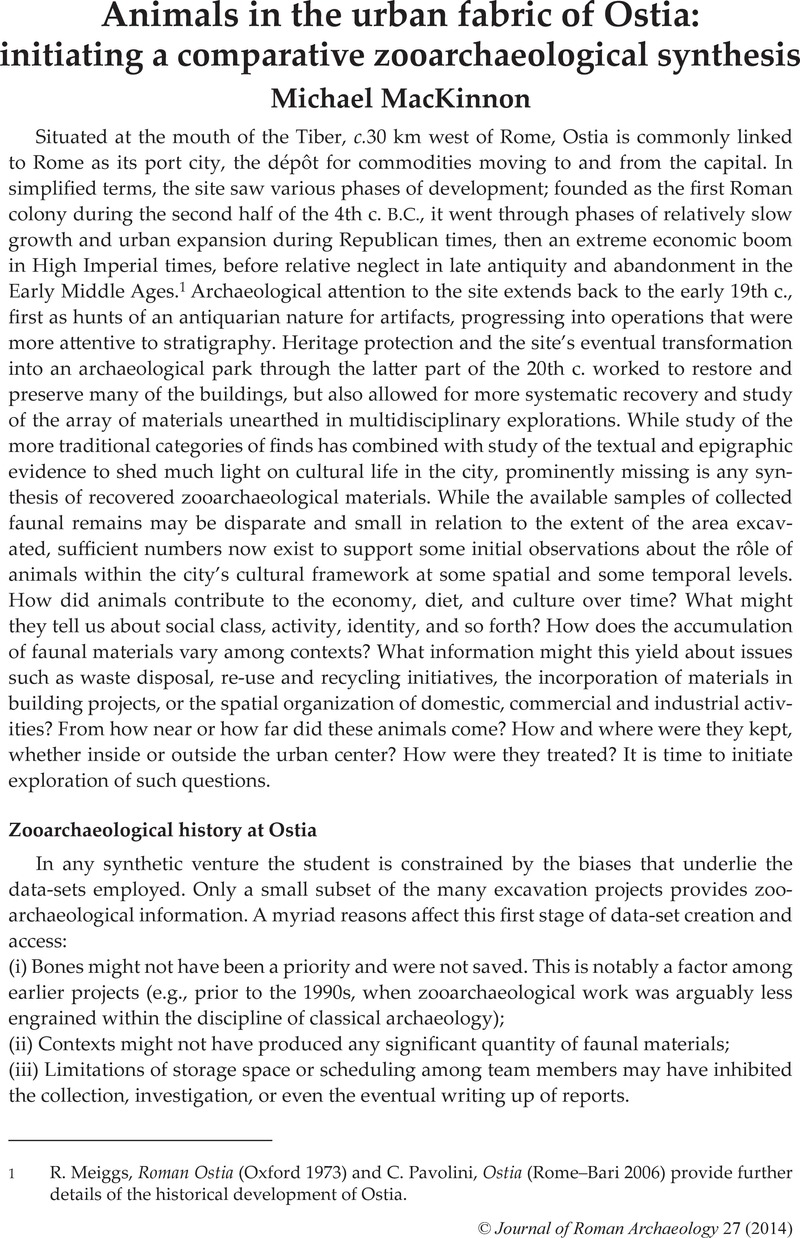 16 Indeed, recovery details for some assemblages are lacking, often leading to an assumption that sieves were not used in those cases.

20 von den|Driesch, A., A guide to the measurement of animal bones from archaeological sites (Cambridge, MA 1976)Google Scholar.

35 Only sites with available (and sufficient) MNI data for skeletal-part distribution were included in Table 3.

37 For which no other zooarchaeological information is reported beyond the frequency statistics listed here.

43 See MacKinnon, M., “Pack animals, pets, pests, and other non-human beings,” in Erdkamp, P. (ed.), The Cambridge companion to ancient Rome (Cambridge 2013) 125–27Google Scholar, for discussion in the case of Rome. At Ostia there are many rooms (and perhaps more particularly rooms within horrea) that could potentially house animals, either temporarily or for longer stretches.

46 A general lack of evidence for private cooking facilities among Roman urban households presupposes the importance of tabernae in furnishing food and drink not only to permanent residents but also to travellers and day-laborers. Cf. DeLaine, J., “The commercial landscape of Ostia,” in MacMahon, A. and Price, J. (edd.), Roman working lives and urban living (Oxford 2005) 29–47 Google Scholar; Kieburg, A. Z., “Roman tavern life - remarks on the remains of taverns in Ostia Antica,” in Aygün, C. (ed.), SOMA 2007. Proc. XI Symposium on Mediterranean Archaeology, Istanbul 2007 (BAR S2190; Oxford 2009) 457–61Google Scholar. Nonetheless, a useful study of Ostian domestic kitchens shows that these were far more common than once thought, but had been tidied away under the drive to present a suitably imperial city for Mussolini's 1941 exhibition: see Riva, S., “Le cucine delle case di Ostia,” Meded 58 (1999) 117–28Google Scholar. All the ground-floor units in the Insula dei Dipinti had kitchens, including Room 35, as did the first floor in the House of Jove and Ganymede in its later phase (I owe this reference and information to J. DeLaine).

50 The fulling industry at Ostia is discussed at length by Flohr, M., The world of the fullo. Work, economy and society in Roman Italy (Oxford 2013)CrossRefGoogle Scholar. Zooarchaeological evidence can assist with reconstructions of sheep and goat husbandry schemes that may link to the economics behind wool production, but it is unlikely that fulleries (which deal with wool and garments) would contain any significant quantities of animal bones from slaughter or the processing of carcasses.

60 MacKinnon (supra n.18) 184. Our understanding of livestock markets at Ostia is conjectural. One possibility is the campus of the Magna Mater.

* Views captured on Cambridge Core between September 2016 - 21st January 2021. This data will be updated every 24 hours.

Animals in the urban fabric of Ostia: initiating a comparative zooarchaeological synthesis
×

Animals in the urban fabric of Ostia: initiating a comparative zooarchaeological synthesis
×

Animals in the urban fabric of Ostia: initiating a comparative zooarchaeological synthesis
×
×