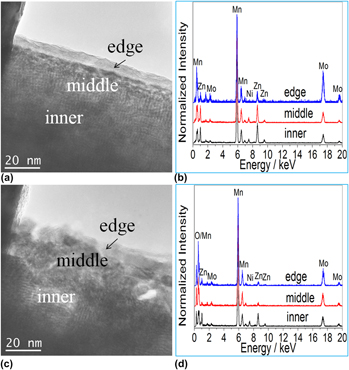 Antiperovskite manganese nitrides Mn3MN (M = Zn, Ni, Cu…) have been extensively studied in the past decade due to their many interesting properties, such as negative thermal expansion. To get a better understanding of the origin of these phenomena, the information from the microscopic scale is necessary, so we performed systematic transmission electron microscopic study of Mn3Zn0.8Ni0.2N and found that the sample particle is wrapped in a thin MnO layer. The same result was also found in Mn3Zn0.5Ni0.5N and Mn3ZnN, indicating that it is a common phenomenon in this kind of compound. The presence of the MnO surface layer was also confirmed by the macroscopic XPS measurements. Our study suggests that M is easier to be lost than Mn in manganese nitrides Mn3MN (M = Zn, Ni, Cu…), and this character is much more obvious on the surface, i.e., this kind of compound has a strong surface activity. Figure 6 could best represent this manuscript.