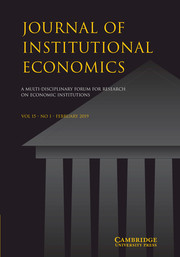 Symposium on the Empirics of Judicial Institutions