Readers of this journal should be aware of an interesting series of articles published recently by the Appalachian Mountain Club in their semi-annual journal Appalachia.

In the issues of December 1960, June 1961 and December 1961 appeared articles by Dr. Will F. Thompson entitled “The shape of New England mountains”. The first of these articles deals with the published research on these mountains, with the rôle of climate in the development of mountain landscapes in general, and finally with the character, distribution, origin and utility of climatic regions in mountains. The purpose of the first article is to put the geomorphology of New England mountains into its proper context relative to other mountains around the world. This article concludes with a comprehensive bibliography covering the scientific literature relative to the geomorphology of New England mountains.

The second article offers the first concise analysis of the processes of congelifraction and solifluction as they make themselves manifest in Felsenmeer creep on the slopes of these exposed hills. The term Felsenmeer, though fairly well known, is not in general use by the scientific community; it refers to a blanket of coarse rock, riven for the most part from the nearby bedrock, or developed from moraine, talus, etc. and kept in motion by frost heaving; Felsenmeere are generally considered static or “fossil”. A rock glacier is a more complex form developed from a Felsenmeer.

Dr. Thompson points out that this process occurs actively on exposed areas above the timber line, where climatic conditions are comparable to those of places in Arctic regions about which there is much in the literature on polygon structures and their causal factors. Polygon structures, as such, are relatively rare in mountain areas, because they imply fine soil at the surface which is generally lacking in the vicinity of steep gradients, but the climatic conditions necessary for the formation of polygons are similar to those required for Felsenmeere. However, in New England this process also has significant and current effect on the timber-covered upper subalpine slopes previously thought stable. In this new departure, Dr. Thompson has thus brought information, never applied before, to bear on thè past glacial history of these mountains.

The commonly accepted theories of glacial action in the subalpine mountain areas of New England prior to this study held that no significant amount of local alpine glaciation occurred in post-Wisconsin times. The evidence in support of this thesis is that there are no visible moraines which can be related to such local glaciers, although no one has denied the existence of prominent cirques. In these articles Dr. Thompson points out that many of the moraines, otherwise to be expected in place from any post-Wisconsin glaciers, have been reduced by frost action and mass wasting to the point that, for the most part, they are now indistinguishable from the larger mass of ground moraine and Felsenmeere covering most of the entire area. With the establishment of this one point Dr. Thompson has put forward an entirely new concept of post-Wisconsin geomorphic history in these mountain areas.

It is the third article, however, that contains material of most interest to this reviewer. While the detailed description of regionally characteristic solifluction processes in the first two articles is a notable contribution to the literature, these articles merely succeed in competently explaining those phenomena that had hitherto been glossed over or only partially accounted for. The third article, however, takes issue with strongly accepted theories regarding the post-Wisconsin history of New England mountains. In so doing, the author has had to come up not only with acceptable indications of his thesis, but sufficiently strong ones to overcome the academic inertia of earlier published studies.

Here Dr. Thompson shows conclusively the definite existence of a valley glacier in Northwest Basin on Mount Katandin (the most unfavorable area for retention of snow, due to prevailing winds) by pointing out that the morainic material found on the floor of this ravine can be traced only to the bedrock of the upper reaches of this valley which lie generally to the south, and that consequently all material dropped by the retreating continental ice must somehow have been removed. Previously published studies by Ralph Tarr brought out that a small residual glacier had persisted in South Basin (an area especially favored by wind deposition of snow). By establishing the existence of a Northwest Basin glacier (cf. Fig. 1), Dr. Thompson has shown that local glaciers have existed in considerably less favorable basins in post-Wisconsin times. 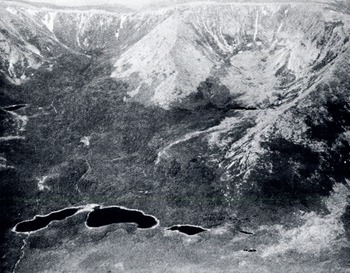 (Photograph by Will F. Thompson)

Fig. 1. Upper Great Basin (left) and North Basin (right)—Mount Katandin; Hamlin Ridge in the centre shows an excellent Felsenmeer; there is a substantial rock glacier in North Basin. The lakes in the foreground lie behind recent terminal moraines of local glaciers.

Further proof of this local glacierization is offered by the presence of tarns carved into the bedrock, which must have once been filled by the debris of a continental glacier and thus owe their present existence to the cleaning-out action of a post-Wisconsin local glacier.

On Mount Washington, Dr. Thompson has noted, in my opinion, only a part (the larger part) of the evidence that substantiates this thesis. In dwelling briefly on a ridge of morainic material running easterly along the Lion Head side of Tuckerman Ravine (Fig. 2), it is felt that insufficient proof has been drawn from what is clearly a lateral and, where it curves to enclose Hermit Lake, a terminal moraine. Noting that in the past this ridge had been classed as some sort of pro-talus rampart, Dr. Thompson has failed to take full advantage of this feature which further supports the contention he developed from exhaustive work done in other areas. 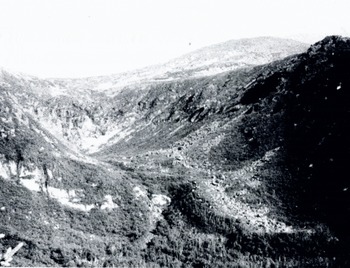 (Photograph by Will F. Thompson)

Fig. 2. Tuckerman Ravine in early summer. The line of boulders extending from the centre to lower right has been called variously pro-talus rampart, rock glacier or lateral moraine. The summit of Mount Washington is in the upper right. “Striations” discussed in the text are to be found above the right-hand end of the snow patch.

Discussing the “striations” which had been noted on the headwall of Tuckerman Ravine (Fig. 2) by the younger Goldthwaite, Dr. Thompson makes it clear that they are illusory; but here, too, he fails to take full advantage of everything at his disposal. Further proof of the non-existence of Goldthwaite’s striations can be noted not only from the current processes scarring paint by spring time snow and rock slides, but by the very nature of the bedrock from which this cirque is carved.

The schist, of which a great deal of the Presidential Upland is made, has a strong and minute foliation which under certain lights and in certain exposures can be easily confused with striations. In this immediate area the avalanche scars documented by Dr. Thompson, the “striations” found by Goldthwaite and the schistose foliation all line up in the same direction. Of course, the fact that no striations are to be found today on any exposed areas above the timber line would indicate that they would be even less likely to survive in an area subject to impact from repeated stone falls; nevertheless, an historical thesis which was held for many years was based in large measure on the existence of these “striations”. It is my contention here, as well as in the previous paragraphs, that Dr. Thompson has not only done a very fine piece of research in detailing the mass wastage processes so active in these mountains today, with their obvious but previously discounted effects, but his proof of the existence of post-Wisconsin local glaciation is amply sufficient and he did it with ammunition left in reserve.

Glaciation, per se, is not the main theme of these articles. In the past glaciological work has been done without reference to the regional landscape—in a sense out of its context. Dr. Thompson has developed herein a broader viewpoint showing that the mountain landscape developed as a response to all the factors acting upon it. This work has principal significance to glacial geologists and glaciologists in that it puts glaciers into their geomorphic context in New England and it thereby provides a format for similar studies elsewhere.