During reconnaissance studies on Sukkertoppen Iskappe, Greenland, and on the north (or main) dome of the Barnes Ice Cap, Canada, temperature measurements were made in three bore holes. The holes were bored with a 50 mm electrical hot point (Reference HookeHooke, 1976[b]) and cased with a 32 mm O.D. aluminum tube filled with diesel fuel. Measurements were made with a VECO thermistor probe and Data Precision 245 multimeter. The system was calibrated against a standard thermistor at the Cold Regions Research and Engineering Laboratory in Hanover, New Hampshire, U.S.A. Because the calibration was done in a non-circulating fluid bath, no further correction for self-heating of the probe, which amounted to about 0.09 deg, was necessary. The system is capable of resolving temperature differences (gradients) of 0.003 deg but the uncertainty in measured temperatures, resulting largely from calibration errors, is estimated to be 0.05 deg. 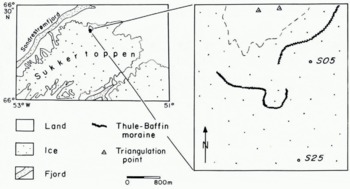 Fig. 1. Index map showing location of bum holes on Sukkertoppen. Foutions of holes relative to moraine and to each other were established by theodelite, survey from triangulation points shown.

Two of the holes were drilled in the ablation zone on Sukkertoppen. Hole S05 was at an elevation of about 1 170 m, whereas hole S25, 2.3 km up-glacier from S25, was about 60 m higher (Fig. 1). Measurements were made 2-3 d after drilling so thermal equilibrium had not been re-established, but repeated measurements in hole S05 24 h apart allow tentative extrapolation to equilibrium. The measured temperatures at 19 m after 2 d were -7.3 and —6.3°G in S05 and S25, respectively (Fig. 2) ; the equilibrium temperatures are estimated to be 0.1 to 0.2 deg colder than this. The down-glacier decrease in temperature is attributed to differences in snow cover and melt regime. The snow insulates the ice in the fall and winter but allows percolating melt water to reach the snow-ice interface early in the spring (Reference Hookc and SplettstoesscrHookc, 1976[a]).

The thermal gradient between 19 and 23 m in S25 is 0.14 deg m"1 (Fig. 2), which corresponds to a heat flux of about 1.8 $$ μJ cm"2 s1. Measurements near the southern tip of Greenland (Reference Sass, Sass, Nielsen, Wollenberg and MonroeSass and others, 1972) suggest that the geothermal contribution to this flux is about 0.24 $$$ μ? cirr2 *-*. The unusually high gradient can be attributed to lack of thermal equilibrium in the hole, to a high upward hole-parallel velocity, or to refreezing of melt water at the base of the glacier. Although the hole had not reached thermal equilibrium, departures from equilibrium should not be strongly depth-dependent over this interval; thus the temperature gradient should not be greatly in error. The vertical velocity required to produce such a gradient is of the order of 1-2 m year"1, depending on ice thickness. As such a high flow rate is unlikely, at least some refreezing of melt water at the base of the glacier is inferred. 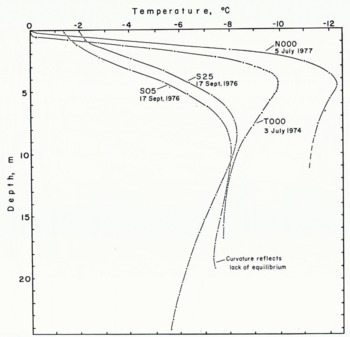 Other temperature measurements on Sukkertoppen are sparse. Reference BullBull (1963) obtained measurements at depths of 3-4 m at four locations above 1 500 m in the accumulation area and none of his measurements was lower than -o.5°C. He concluded that the deeper ice is probably temperate. Reference Henry and WhiteHenry and White (1964), however, found temperatures substantially lower than o°C at depths "below the winter cold wave" near the margin of Sukkertoppen. Their holes were in the ablation area at an elevation of about 500 m. This down-glacier decrease in temperature is due to the effect ?f refreezing of percolating melt water in the accumulation zone (Reference LoeweLoewe, 1966; Reference Hookc and SplettstoesscrHookc, 1976[a]).

On the inland ice, Reference Colbeck and A. J.Colbeck and Gow (1974) measured temperatures in two deep holes at Isua, about 165 km south-east of our holes on Sukkertoppen. The tops of both holes were at approximately 1 170 m and the holes were 97 and 265 m deep. The 20 m temperatures were between —4 and 5°C in both holes and deeper measurements suggested that melt water would be present at the base in both locations.

Our measurement on the north dome of the Barnes Ice Gap was made in hole Nooo at lat. 70° 01 ' N., long. 73" 25' W. at an elevation of approximately 1 115 m. Due to problems with the drill and to approaching bad weather, the hole reached a depth of only 8.6 m and measurements had to be made within 3 h of the time the hole was completed. Thus, thermal equilibrium clearly had not been reestablished but measurements over a period of nearly 2 h at the bottom of the hole again provide a basis for extrapolating to equilibrium. The equilibrium temperature at 8.6 m is estimated to be — 11.7+o.3°C (Fig. 2). For comparison, the temperature at a depth of 17m in hole Tooo at an elevation of 892 m on the south dome of the ice cap is —7.67°C . Tooo was drilled in July 1973 and was measured 1 year later. Hole Nooo penetrated highly permeable firn containing scattered ice lenses, indicating that this hole was in the percolation zone of the accumulation area. In contrast, at depths greater than 2-3 m, hole Tooo was in superimposed ice with scattered firn layers characteristic of the soaked zone. The amount of percolating melt water at Tooo is thus greater than at Nooo, and heat released by refreezing of this water is responsible for most of the temperature difference between these two sites. Based on numerical modeling of temperature profiles in Tooo and five additional holes at lower elevations on the south dome, the mean annual temperature at Tooo is estimated to be about — 13.o±o.5°C (Reference HookeHooke, 1976[a] ; unpublished data). The mean annual temperature at Nooo is probably only a degree or so colder.

Financial support for the field work in Greenland was provided by the University of Minnesota Graduate School and by the McMillan Fund of the University of Minnesota, College of Liberal Arts. Permission for the study was granted by the Commission for Scientific Research, Copenhagen. The Barnes Ice Cap work was supported by the U.S. National Science Foundation with the co-operation of the Glaciology Division, Department of Environment, Canada. The assistance of A. D. Stanley in calibrating the thermistor probe is appreciated.