Franz Josef Glacier (Ka Roimata O Hine Hukatere) is a temperate alpine valley glacier in South Westland, New Zealand (43°26′ S, 170°10′ E). The glacier terminus behaviour over the last century has consisted of general retreat with a series of minor advances (Reference ChinnChinn, 1999). A period of terminus retreat began in 1999 and is continuing at present. A series of events in February and March 2003 resulted in subglacially derived, sediment-rich water draining over the surface of the glacier for a prolonged period of time. These events are potentially a major hazard because up to 400 people daily take part in guided walks on the glacier.

Abnormalities in the glacier’s drainage system were first recognized during a routine visit to the glacieron16 February 2003, when evidence of a single supraglacial outburst flood (jökulhlaup) was found at the base of the main icefall. This flood had apparently emerged from a hole ∼4 m wide and 1 m high, close to a semi-permanent protruding bedrock feature locally known as the “Black Hole” (Fig.1). Local guides suggested the flood event had occurred on 14 February 2003, following heavy rainfall in the area. The water from this outburst flood drained into crevasses and moulins within ∼250 m of its point of emergence. Isolated blocks of glacial ice up to 1 m in diameter were found on the surface of the glacier, along with debris ranging from mud to gravel size, and occasional blocks of debris-rich laminated basal ice. 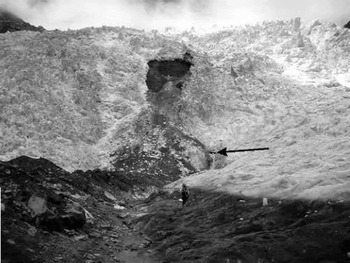 Fig. 1. Evidence for initial outburst flood, observed on 16 February 2003. Material on left is medial moraine. The visible bedrock near the base of the icefall is the original Black Hole. Note the relatively small hole from which the initial flood emerged (arrowed).

When the glacier was revisited on 22 February 2003, significant changes had occurred. 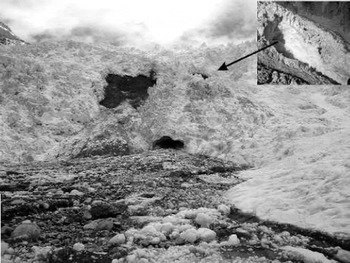 Fig. 2. Taken from a similar viewpoint as Figure 1, on 22 February 2003. The New Black Hole is visible to the right of the Black Hole. The inset is an aerial view of the New Black Hole, taken on 27 February. Note the growth of the hole from which the subglacial waters emerged. 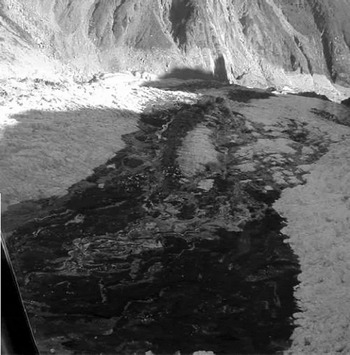 Fig. 3. The spatial extent of the flood plain created on the glacier’s surface. Width of the discoloured area ∼200 m. Photograph taken on 27 February. 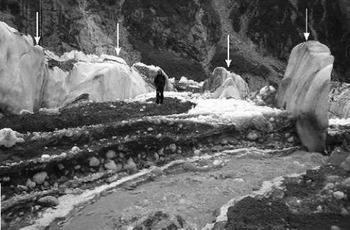 Fig. 4. An active area of crevassing in which relief of tens of metres has been reduced as a result of infilling of crevasses by rounded blocks of ice and sediment transported by flood waters. Isolated seracs (arrowed) emerge from flood deposits. Blocks of ice can also been seen in the active stream.

Discussions with local guides revealed that the New Black Hole, outwash fan and flood plain had developed rapidly since 17 or 18 February. Surface flow occasionally ceased during this period. At some time between 18 and 22 February, an outburst flood had also occurred at the snout of the glacier, causing avulsion of the main channel of the proglacial river (the Waiho River). Ice blocks were visible in the river beyond the Waiho Bridge 6 km downstream on 22 February.

The New Black Hole reached its largest size on 24 February. On this day, a subglacial stream was observed emerging from the base of the ice wall on the up-glacier side of the New Black Hole, where it flowed into and down the New Black Hole and emerged onto the surface of the glacier. Ice falling into the New Black Hole intermittently blocked the flow. Helicopter observations on 25 February showed pooling of water within the hole, caused by ice blockage. A series of rapid “eruption” -like outbursts followed shortly after, which cleared the blockage.

Observations made by the authors on 27 February suggested the New Black Hole had grown to ∼700 000 m3 (Fig. 2). A large proportion of the ice from the New Black Hole had been deposited in the outwash fan and flood plain (Figs 2 and 3), in crevasses and moulins (Fig. 4), and in deposits along the western margin of the glacier. Expansion of the New Black Hole continued until it reached, and amalgamated with, the original Black Hole on 28 February. Surface flow ceased on 5 March, and at the time of writing has not returned.

Glacier outburst floods at the snout of Franz Josef Glacier are apparently frequent (e.g. Reference SaraSara, 1974), although surface flooding has not previously been described. Reference SaraSara (1974) reported a large “cave-in” of ice at the foot of the main icefall in late January 1967. Reference SaraSara’s (1974) descriptions of the location and nature of the hole suggest that it may have been at the same location as that which formed in 2003.

In addition, Reference Marcus, Moore and OwensMarcus and others (1985) reported the sudden development of a torrent flowing down the western side of the glacier between 1100 h and “sometime in the evening” of 2 June 1981, which caused an estimated 500 000 m3 of ablation along the true-left (western) margin of the glacier. This flood occurred in a similar location to that of the 2003 events.

Although outburst floods are common glaciological events (e.g. Reference TheakstoneTheakstone 2001), what is unique about this event is its longevity and its possible human impact. In the immediate area of the glacier flooded by the 2003 events described above, up to 60 tourists a day were transported by helicopter for glacier walks. Despite the unpredictability of the flooding in February and March 2003, both local guiding companies chose to continue with their activities, with varying degrees of caution.

Thanks to local glacier guides and the Department of Conservation of Franz Josef Township for observations and discussions, in particular L. Raffills of The Guiding Company. Thanks to I. Owens for comments on an earlier version of the manuscript. B. Goodsell is funded by The Leverhulme Trust. B. Anderson and W. Lawson are funded by grant U6474 from the University of Canterbury Research Committee.