Some unusual snow formations occurred at the Montreal Road Laboratory site of the National Research Council of Canada, near Ottawa, during a storm on 23 November 1949. The same phenomenon was also observed at Rockcliffe Airport and the Dominion Experimental Farm at the same time. The former is located approximately one mile, and the latter six miles, from the Laboratory site. The formations are illustrated in Figs. 1 and 2, p. 458. The average wind velocity was approximately 20 m.p.h. (8.9 m./sec.) from the south. The air temperature was +10° C. The snowfall comprised wet clusters of stellar crystals. The average diameter of a cluster was approximately 15 mm. Surface crystals were lifted by wind action. They did not, however, become disaggregated because of the strong cohesion caused by the high temperature. Nevertheless, the resultant accumulation was light enough to be rolled by the wind. Density determinations of the structures yielded an average value of 0.07 gm./cc. This value is probably too large due to unavoidable compression during sampling. Snow was continuously added with forward movement. The motion persisted until either rolling friction became too large or a surface irregularity was encountered. The largest structures were approximately 35 cm. in diameter and 35 cm. in length. Soon after the storm the air temperature dropped and did not rise above freezing point for six days. The mounds were visible for several days. 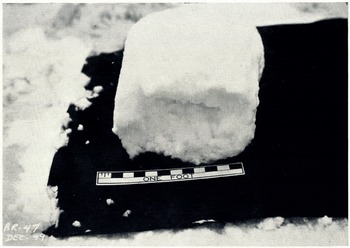 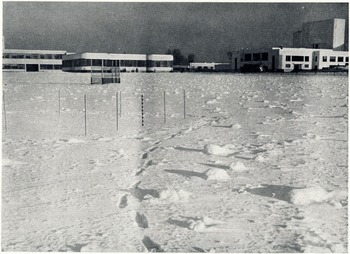 Fig. 2 The snow surface 24 hours after the storm

[A description of snow rollers was published in the Quarterly journal Royal Meteorological Society, Vol. 34, No. 145, 1908, p. 87–88, followed by descriptions of similar phenomena by a number of well-known meteorologists, including Alexander Buchan, G. J. Symons and Wilson A. Bentley (Jericho, Vt.).—Ed.