On re-assessment of the mass balance of the Lambert Glacier drainage basin, Antarctica

In a recent paper, Reference McIntyreMcIntyre (1985) radically revised earlier estimates of the mass budget of the Lambert Glacier drainage basin (Reference AllisonAllison, 1979). His re-assessment of the mass balance results from estimates of a decrease in both the size of the basin and in the average accumulation rate.

Reference McIntyreMcIntyre (1985) used a compilation of surface elevations (Reference Drewry and DrewryDrewry, [c1983]) based on recent data from both radio echo-sounding flights and from the TWERLE balloons to construct ice-flow lines and hence define the drainage basin. His estimate of an area for the interior drainage basin of 902 000 km2 is undoubtedly an improvement on the earlier estimate of 1 090 000 km2.

The major change in the mass balance, however, results from McIntyre’s revision of the average accumulation rate over the interior basin from a value of 55 kg m−2 a−1 down to a value of only 36 kg m−2 a−1. No direct measurements are used for this revision; only indirect evidence from satellite imagery, of large areas of bare ice within the interior basin, is used. We suggest that this imagery should be interpreted totally differently.

In Figure 1, we show a Landsat image for January 1973, path 134, row 114, centred on lat. 75° l8’s., long. 61° 25’ E. (Fig. 2), This is slightly to the west of the scene presented by Reference McIntyreMcIntyre (1985) (which was poorly reproduced in the Journal of Glaciology) for path 126, row 115 (Fig. 2). The image in Figure 1 has been digitally produced from the Landsat CCT by one of us (N.W.Y.) and CSIRONET (formerly the CSIRO Division of Computing Research). This enhanced image clearly shows a number of surface features including Komsomol’skiy Peak, small patches of bare “blue” ice around Komsomol’skiy Peak, crevassing, and two different shades of snow surface over the larger part of the (Fig.2 and Fig. 3) scene. The bare ice around Komsomol’skiy Peak has been confirmed from overflights of this area (Reference Morgan and BuddMorgan and Budd, 1975) and in our image this “blue” ice has a completely different signature from the darker snow over most of the area. It is these darker snow areas which Reference McIntyreMcIntyre (1985) interpreted, we believe erroneously, as bare ice, and used as a basis for his claim that much of the interior of the Lambert Glacier basin is a zone of zero accumulation. 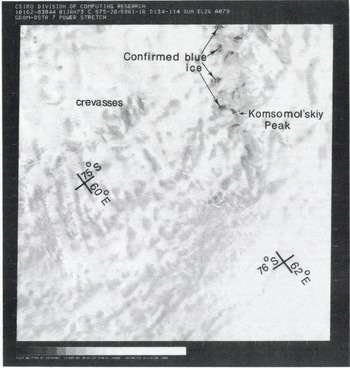 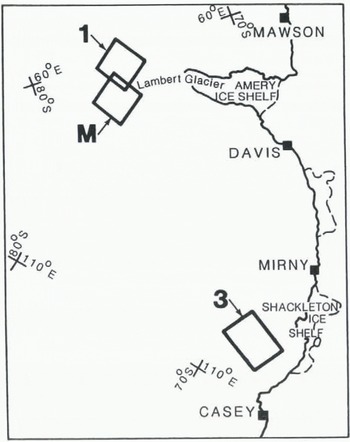 Fig. 2. Eastern Antarctica, showing the approximate coverage of the Landsat imagery ill Figures 1 (1) and 3 (3). and figure 2 in Reference McIntyreMclntyre (1985) (M). 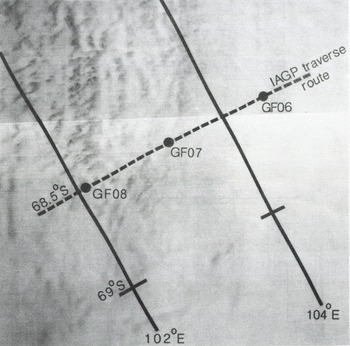 Surface features of the type over the greater part of Figure 1 are seen commonly in Land sat imagery of the steep coastal slopes of Antarctica. Figure 3 is a composite image (path 114, rows 108 and 109, October 1973) inland of the Shackle ton Ice Shelf (Fig. 2), which shows similar surface features. No CCTs are available for these images and Figure 3 has not been enhanced. The 1983 ANARE over snow traverse, contributing to the International Antarctic Glaciological Project (IAGP), passed through this area (Reference MedhurstMedhurst, 1985) but observed no bare-ice areas. However, extensive areas of hard winter surface glaze were observed with interspersed areas of softer snow over distances of hundreds of metres to kilometers. This winter glaze is a common feature over the full length of our traverse routes (Fig. 4) on the katabatic slopes of Wilkes Land from long. 95° E. to 130 °E. We suggest that it is the glaze that appears as the darker tones in the Land sat image. Reference JonesJones (1983) attributed formation of the glaze to kinetic energy transferred from drift-snow particles. It only forms in areas where there are persistent strong surface winds and almost continuous snow saltation during autumn and winter. As noted by Reference McIntyreMcIntyre (1985), much of the interior of the Lambert Glacier basin is an area of high surface slope and will hence be one of strong katabatic flow. The strong winds can redistribute snow but do not result in significant net ablation at the very low temperatures of these inland areas. 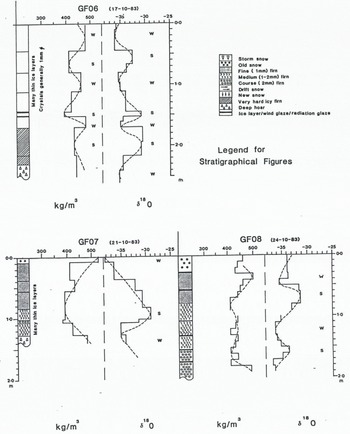 Reference McIntyreMcIntyre (1985) claimed that the low-brightness temperatures from microwave radiometry reported by Reference Zwally and GloersenZwally and Gloersen (1977) support the notion that the Lambert Glacier interior basin is an area of exceptionally low accumulation. The brightness temperature is, however, a complex function of temperature and snow-crystal structure, and might equally be explained by the different crystal structures in the snow-pack in areas subject to wind glazing. For example, at many sites where there is glaze, we find a very high percentage of depth hoar, probably resulting from restricted vapour transfer within the snow-pack.

Remote sensing is increasingly providing valuable new data over vast areas of Antarctica but considerable care must be exercised in interpreting these data. Land sat imagery cannot be definitively interpreted merely in terms of observed shade differences, particularly when there are no supporting ground-truth data and, while we believe that our interpretation of the imagery from the Lambert Glacier basin is more plausible than that given by McIntyre, both more ground-truth data and quantitative assessment of the Land sat digital signal by spectral classification are needed. The pitfalls associated with interpretation of Land sat imagery by shade differences alone have been previously illustrated for this region of Antarctica; Reference Southard and MacDonaldSouthard and Mac Donald (1974) claimed that the blue-ice areas seen around Komsomol’skiy Peak (Fig. 1) were mountains.

Until new hard data on accumulation rates are obtained from within the interior of the Lambert Glacier basin, we see no justification for revising the accumulation-rate distribution given by Reference AllisonAllison (1979). We plan to conduct over snow traverses within the basin from about 1988. Even accounting for the reduced area of the basin, we estimate that the interior Lambert Glacier basin remains significantly out of balance, with a mass input of approximately 50 GT a−1 and an outflow of only 30 GT a−1.