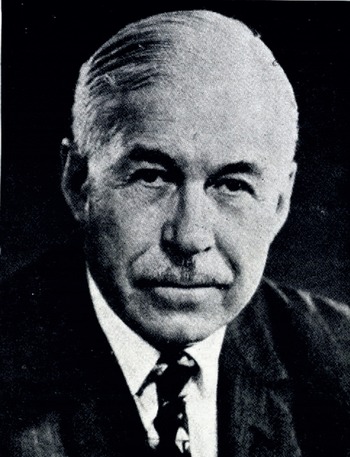 Joel Ellis Fisher died suddenly on Thursday, 6 January 1966, at the age of 74 in New York City. Ellis died as was only proper “with his boots on”, for he never considered retirement and was on his way to work.

During the first World War he was a naval lieutenant, and afterwards for many years was president of the Northwestern Terminal Railroad in Denver.

He served for 20 years as President and/or Treasurer of the American Alpine Club. He was an active member of the Swiss, French, Italian and English Alpine Clubs, and an honorary member of the Yale, Harvard and Colorado Mountaineering Clubs. During a span of 57 years of active climbing he made over 150 major ascents in the Alps, and he climbed the Matterhorn six times, the last in 1950.

He was a mountaineer primarily, although in his later years he became quite interested in glaciology and was particularly noted for his intensive, amateur investigations of Forbes banding in many parts of the Alps. He returned year after year to certain areas in order to correlate his researches and findings. Many of these were published in various of the mountaineering and scientific journals in both Europe and the United States. For many years he privately sponsored research on glaciers and gravitation.

Ellis Fisher was a good friend to many of the younger generation of mountaineers—particularly those with a somewhat scientific bent, and his home was always open to them for a meal or a visit.

He was a noted philanthropist—not in the sense of vast public acknowledgement, for this was not his way. Instead, he performed his good works quietly and privately, helping many refugees from the misfortunes of European wars to find themselves in the New World.

A fine man who served his fellow men in a most exemplary manner, we who benefited so much from his many kindnesses have much to remember, and much to learn.