Fluctuations of the Terminus of the Harald Moltke Bræ, Greenland

The terminus position of the Harald Moltke Bræ has been mapped from existing maps and from aerial and terrestrial photographs for the years 1946–47, 1954, 1956, 1962 and 1965. When abetted by Wright’s earlier work, a fairly detailed record of terminus position exists for the period 1916 to 1965. The glacier has been in nearly continuous retreat during this period interrupted by a slight advance from 1926 to 1932. Loss of area has been accelerating since 1946–47. Ice flow velocity near the terminus has fluctuated through a known range from 30 m./yr. to over 1,000 m./yr.

Given certain parameters characteristic of the glacier in question, recent theoretical work (Reference NyeNye, 1965) has demonstrated the feasibility of calculating budget histories of glaciers from records of terminal advance and retreat. At present this treatment has been confined to alpine-type glaciers having their termini on land. This type of analysis may well be extended to glaciers ending in water, albeit with some added complexity, at which stage many of the large outlet glaciers of the Greenland Ice Sheet could become subject to such study.

Historical variations of terminal positions are recorded for scores of glaciers in the mountains of the temperate regions. Such is not the case for the polar regions where records are scarce or non-existent even in the relatively well populated areas. The purpose of his short report is to update the record of the Harald Moltke Bræ, one for which a fairly detailed record exists from 1916 to the present.

The Harald Moltke Bræ is a large outlet glacier of the Greenland Ice Sheet, debouching into Wolstenholme Fjord at 76° 35′ N. and 68° W. near Thule Air Base, in north-western Greenland. The glacier is nearly 30 km. long before losing its identity in the ice sheet proper and, at its terminus, is close to 7 km. wide. The glacier and its drainage basin (determined from form lines on current maps) has an area of approximately 300 km.2, of which about 200 km.2 represents the net accumulation zone. Two small glaciers and one sizeable glacier (“Blue Ice Valley” glacier) join the Harald Moltke Bræ from the south. The “Blue Ice Valley” component can be identified down-stream from its confluence with the Harald Moltke Bræ to the terminus by the presence of morainal material in the ice along the boundary.

The Harald Moltke Bræ is one of three glaciers which reach tide-water inWolstenholme Fjord. The others, Knud Rasmussen Gletscher and Chamberlin Gletscher, are outlet glaciers of “North Cap”, a local ice cap independent of the main ice sheet.

The positions of the terminus of the Harald Moltke Bræ and of the other glaciers entering Wolstenholme Fjord were first described in detail and sketched in 1916 by Reference KochKoch (1928). Koch subsequently sketched the Harald Moltke Bræ terminus again in 1923. Wright (1939) summarized Koch’s work and added observations by Reference KillerichKillerich (1929) and the personal recollections of Dundas inhabitants to the results of his own mapping to produce a map showing the location of the terminus for the years 1916, 1923, 1926, 1928, 1932, 1937 and 1938. Wright also mapped the terminal positions of the Knud Rasmussen and Chamberlin Gletscher for the years 1937 and 1938. Using the terminus position of 1938 as a base, Wright plotted the change in area of the glacier for the 1916 to 1938 period. (Wright’s observations are included in Figure 2.) Reference Davies and KrinsleyDavies and Krinsley (1962) in a survey of north Greenland glaciers briefly reviewed Koch’s and Wright’s work and, in a sketch map modified from Wright, added the 1946, 1953, 1956 and 1959 positions of the terminus.

Wright’s observations included a determination of the flow rate of the Harald Moltke Bræ by comparative photography. From the shift in position of crevasses identifiable in photographs taken from the same point (Station 416) one year apart he calculated a flow rate of approximately 30 m./yr. in the central portion of the glacier, near the terminus.

Vertical aerial photography of the terminus of the Harald Moltke Bræ is available for the years 1954, 1956 and 1962. Mosaics were constructed from the photography of each of these years and the terminal positions then plotted on the 1954 mosaic. In addition the terminus position mapped by Wright in 1937, the 1946−47 position from Army Map Service 1 : 100,000 maps, and the 1965 position based on terrestrial photography and visual observation were also plotted. A map was then traced from the 1954 mosaic showing the above frontal positions and used for planimetric measurements.

Apart from two triangulation stations established by Wright, no identifiable horizontal control exists within the area photographed. Construction of the mosaic was done by matching identifiable points in adjacent photographs and making judicious adjustments where necessary. Horizontal scale was provided by calculating the distance between triangulation stations 416 and 2 from Wright’s data. Station 416 was occupied in the field both for identification and comparative photographic purposes. Station 2 was not occupied and was not identified with certainty on the photography but its position, on the spit at the western end of Nunatarssuaq, severely limits its possible location. The most likely position was chosen from the photography and denoted as station 2 on the map. All measurements of area are subject to a ±5 per cent error because of the doubt in the length of the line from station 416 to station 2.

Planimeter measurements were made of the change in area of the Harald Moltke Bræ using the plotted 1937 position as a base in order to relate these measurements to those of Wright. Several features on the glacier were identifiable in both the 1954 and 1956 photography and their change in position with respect to the line 416–2 enabled estimates of the flow rate to be made. 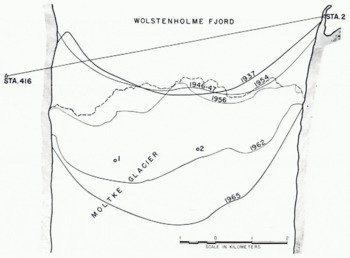 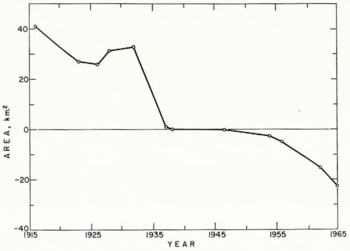 The history of the Harald Moltke Bræ since 1916 has been one of general retreat, interrupted by a period of advance between 1926 and 1932. The period between 1938 and 1954 seems to represent a hiatus in the general retreat of the glacier.

Two points were identifiable in both the 1954 and 1956 photography. Their movement with respect to the fixed line 416–2 gave figures for flow of 260 m./yr. for point 1 and 320 m./yr. for point 2. The points and their respective positions are shown in Figure 1.

During the period 1926 to 1928 the front of the Harald Moltke Bræ advanced 2 km., indicating a minimum mean velocity of 1000 m./yr. In actuality the velocity must have been somewhat higher to balance the effects of calving during the period. Ten years later, 1937–38, Wright’s measurements showed velocities on the order of 30 m./yr. and by 1956 velocities had again increased, this time to approximately 300 m./yr. Such variations in velocity are not unknown in glaciers but are scarcely common. It must also be noted that while the velocity increased by a factor of to from 1938 to 1956, the recession of the glacier actually increased slightly during the same period.

Before speculating on possible causes of the somewhat erratic behavior of the Harald Moltke Bræ, let us consider certain of its physical aspects. The glacier ends in tide-water but, based on physical appearance, i.e. a prominent tidal melt zone and a lack of tidal cracks, it is apparently not afloat. At the terminus, buoyancy forces are probably such as to decrease significantly the shear stress at the bed of the glacier. It is difficult to estimate to what extent, if any, the glacier is frozen to its bed. Direct measurements of even surficial ice temperatures in the ablation zone of the glacier are lacking. The mean annual air temperature is on the order of −10°C. so it is reasonable to assume that the glacier has largely negative temperatures. Percolation from melt waters and from ice-dammed lakes into crevasses and along the margins may appreciably affect the englacial temperature regime. Pit studies at a few locations in the accumulation region indicate net accumulation from 40 to 60 cm. of water equivalent yearly (Reference SchyttSchytt, 1955; Reference BensonBenson, 1962). An ice thickness profile was determined by Reference Barnes and TaylorBarnes and Taylor (unpublished) across the glacier using gravity methods at a point some 15 km. from the terminus and just down-glacier from the “Blue Ice Valley” glacier confluence. These measurements indicate that the ice is close to 150 m. below sea-level. Depth soundings in Wolstenholme Fjord which could give information as to the thickness at the front indicate depths of the order of 80 m. some 4 km. from the 1937 position of the terminus. It is difficult from this to draw any conclusions as to ice thickness. A reasonable guess would be to consider the ice to be on the order of 100 m. in thickness.

Despite the paucity of quantitative information on the Harald Moltke Bræ it is nevertheless of some use to speculate on the possible causes of its behavior, if for no other reason, to point out the areas where measurements must be taken in order to move from speculation to hypothesis.

Mercer (1962) has pointed out that small changes in the elevation of the firn line can, in glaciers ending at sea-level in fjords, lead to rather spectacular changes in the position of the terminus. This is controlled in part by the shape of the fjord and in part is due to the fact that since part of the ablation area is already at a minimum elevation, increases or decreases in ablation can only occur by rather large changes in the total area or by increased calving. Thus the retreat of the Harald Moltke Bræ can be looked upon as the more or less normal reaction of a fjord-ending glacier to a rise of the firn line. This does not in any way supply an explanation for the observed changes in flow velocity.

It seems most probable that the observed changes in velocity are connected with the arrival of broad kinematic waves near the terminus. It has been shown both theoretically (Reference NyeNye, 1958; Reference WeertmanWeertman, 1958) and by direct measurement that traveling waves on glaciers move with a velocity of roughly four times the surface ice velocity. Nye (1962) has shown that at the snout the traveling wave velocity is approximately equal to the surface ice velocity while Reference WeertmanWeertman (1962) has shown that the interaction of the arrival of a kinematic wave and its effect on the controlling obstacle size for sliding, and on a subglacial water layer can lead to velocity changes (due to sliding) of up to 60 times.

It seems likely that the increased velocities noted in the Harald Moltke Bræ are connected with the arrival of kinematic waves at the terminus. These kinematic waves possibly could lead to an increase in sliding velocity if the bed, at least in the extreme lower portion, is near or at the pressure melting point.

It is hoped that in the future it may be possible to make more rigorous determinations of the velocity and to collect these data in a systematic manner.

Fluctuations of the Terminus of the Harald Moltke Bræ, Greenland
×

Fluctuations of the Terminus of the Harald Moltke Bræ, Greenland
×

Fluctuations of the Terminus of the Harald Moltke Bræ, Greenland
×
×