A direct determination of the upper limit for the electric charge density along dislocations in ice has been carried out by measuring the simultaneous effects of an electric field and a mechanical stress on the movement of a low-angle tilt boundary in an ice single crystal. The determination is independent of the geometry of the dislocations or the distribution of the charge along them. No measurable effects of the electric field on boundary motion were found, requiring that the charge density be less than one unit of charge for every 300 atomic lengths of dislocation. This estimate is less than large previous estimates, but is consistent with smaller proposed values.

This research was supported in part by the National Science foundation under contract DMR-76-01058 and DMR-77-10556.

A number of previous studies have suggested that dislocations in ice are electrically charged (Brill and Camp, 1957; Itagaki, 1970, 1978; Mae and Higashi, 1973; Noll, 1973). Unfortunately, there has been no definite experimental determination of this charge. The previous studies were indirect measurements of the dislocation charge, and the resulting values estimated for the charge density range over several orders of magnitude. Brill and Camp (1957), Noll (1973), and Mae and Higashi (1973) reported small but observable changes in the low-frequency (space-charge) region of the dielectric constant for plastically-deformed samples. They associated this phenomenon with a dislocation charge on the order of one unit or less of charge per 106 atomic lengths of dislocation. On the other hand, Itagaki (unpublished) reported large changes in the dielectric constants of samples with deformation. He interprets his X-ray topographic observations (Itagaki, 1970) of dislocations in samples acted upon by an applied a.c. electric field (60 Hz) in terms of a charge density of one unit of charge per 10-102 atomic dislocation lengths.

This determination is independent of the nature of the dislocation geometry and of any assumptions about the distribution of the charge along the dislocation.

The single-crystal specimens used in the study were grown by a zone-refining process. The apparatus is similar to that described by Ramseier (unpublished), and is described elsewhere (Joncich, unpublished, p. 52−53). Individual samples measuring 2 × 1 × 1 cm3 were cut from the 7 cm diameter ingot with a hot-wire saw, and were oriented (to within about 2°) using crossed polarizers. The c-axis lay parallel to one of the 1 cm directions.

A low-angle tilt boundary of approximately 3° was introduced into the specimen by applying a 2 kg mass near to the center of the specimen, in a three-point bending jig, for about 24 h. The specimen temperature during all the tests was approximately —15°C. 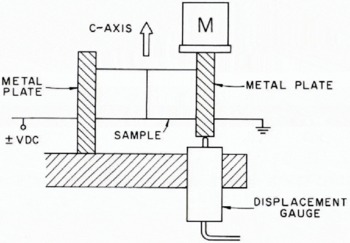 Fig. 1. Sample configuration for measurements of the effects of electric and mechanical forces on a low-angle tilt boundary. The left-hand plate is brass and the right-hand plate is copper.

For the measurements the tilt boundary was first moved with a mechanical stress. Then, with the mechanical stress still applied, an electric potential difference of 3 250 V was applied between the two metal plates.

This electric field could not be maintained indefinitely, but decayed with a time constant of about five minutes. This decay results from the build-up of space charge at the non-ohmic contacts with the electrodes; this value of the lime constant is in agreement with previous measurements (Engelhardt and others, 1960). Hence, for the present measurements, the electric potential was switched between 0 and ±3 250 V with a period of about 30 s. The resulting electric field in the sample was then either 0 or at least 1 500 V/cm.

The results for one of the several measurements arc shown in Figure 2. The stress of 0.2 bar was applied at time t = 0. After an initial transient period of about 30 s the wall velocity is constant, at 0.24 mm/h, in agreement with the observations of Higashi and Sakai (1961). 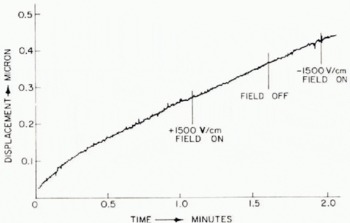 Fig. 2. Measured vertical displacement of the end of the sample as a function of time, with a constant mechanical stress of 0.2 bar and the indicated periodic electric fields.

The electric potential was switched between 0 and ±3 250 V at the times indicated. In no case was there any observable change in velocity, so only an upper limit for the charge density can be estimated from the results. As noted, the field inside the sample should be at least 1 500 V/cm during the brief cycles (local field corrections would increase this quantity), and a conservative estimate for the resolution of the velocity is ±2%. From Equation (1), the charge density of the edge dislocations must be less than

In summary, the present results indicate that dislocations in ice are not heavily charged electrically, so that any charge present is probably associated with a small number of ionic defects distributed along the dislocation (Mae and Higashi, 1973) rather than a large intrinsic charge associated with each dangling bond at the dislocation core. Further, the results suggest that the large dielectric relaxation peak in ice (Schiller, 1958) is not the result of charged dislocation motion.

The authors are indebted to Dr K. Itagaki of the U.S. Army Cold Regions Research and Engineering Laboratory for his advice concerning the apparatus for the growth and preparation of the ice samples.