A theoretical density distribution of the Dumber of bonds per grain as a function of the mean number of bonds per grain is derived from the assumption of randomness and isotropy of grain and grain-bond location and orientation. The knowledge of the theoretical density distribution allows the determination of the effective distribution parameters from section planes or thin sections. The concept of the fundamental unit to describe the strength of snow is introduced. Structural parameters developed on the basis of the fundamental units show improved correlations with the tensile strength.

In various papers (Ballard, 1965; Hobbs, 1965; Keeler, 1969; St. Lawrence, [1975]; Kry, 1975[b]) it is shown that the mechanical properties of snow arc essentially determined by the type of bonds between the ice grains of the snow structure. This report investigates the dependence of the ductile* strength of a snow sample on the arrangement of the bonds in the snow structure. The stereological and geometrical parameters were determined from colored section planes as described by Kry (1975[a]). To be able to perform the tests on homogeneous snow, the samples were prepared as described by Gubler ([1975])· For the tensile strength tests the well-known centrifugal technique was used.

Definition of the "Fundamental Unit"

Snow can be considered as a network of grains connected by ice bonds. At least in low-density snow, no structural order or periodicity exists. Nevertheless the models discussed in this paper propose that the mechanical properties of snow can be traced back to the features of fundamental units. Kry (1975[b]) developed semi-quantitative calculations on the basis of the concept of the fundamental unit to explain the observed variation in the viscoelastic properties of snow. The basic features of the fundamental units (Gubler, 1978) are:

A chain, defined as a series of a single force-bearing grains is proposed to be the basic element of a fundamental unit. The chain is terminated either by a structural element of higher connectivity or by a branch to other chains. The effective coordination number (number of contacts) of a chain grain is n 3e = 2. A bond between two ice grains is denoted as effective if the bond bears a force which can be traced back to the external stresses acting on the sample. The remaining grains of the structure with coordination numbers not equal to 2 are thought to be distributed uniformly on these basic elements. We distinguish three types of grains with contact numbers not equal to 2 : Grains with a coordination number $$ n s = 1 (end grains), grains with $$ n 3 > 2 at the end of a chain (link grains) and grains with $$ n 3 > 2 which are not in contact with a chain (mesh grains). Therefore the fundamental unit consists of a chain as the basic element, the corresponding link grains, end grains and mesh grains (Fig. 1). 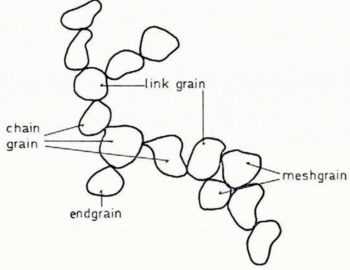 Fig. 1. Definition of a chain.

Parameters to be determined From Section Planes

The following values were measured by a semi-automatic counting method:

The next three values were determined by simple counting or by length measurements in the section planes:

A grain bond is denned as the plane surface of minimum area situated in the neck region of two linked grains. The grain-bond area has the shape of a disk (Kry, 1975[a]). If a grain bond is cut by a section plane it will appear as one or two parallel straight lines connecting two opposite necks of the ice. In the evaluation of the section planes every configuration characterized by two obvious necks exactly facing each other has been considered as a bond or a weak region of the structure.

Theoretical Derivation of the Density Distribution of the Coordination Numbers

Statistical reasons impede a direct determination of the density distribution of the coordination numbers f3(tt3) from the measured distribution fz of the numbers of bonds per grain n2 cut by a section plane independent of further assumptions. The probability of a section plane cutting simultaneously several bonds belonging to the same grain is quite low. For an evaluation of 300 to 500 grains per sample cut by section planes, the standard deviation for n2 > 2 is almost equal to the corresponding mean value of n2. The evaluation of larger section planes is very time consuming.

A theoretical derivation of the type of density distribution /j(«3) is possible with the assumption of randomness and isotropy of grain-bond location and orientation. Kry (1975(b)) has shown that this condition is satisfied within an error of ±10% even after 30% uniaxial plastic deformation of the sample.

For each grain we define a vector k of a magnitude n' with n equal to the number of bonds belonging to the grain and whose direction is given by the mean bond direction relative to the centre of gravity of the grain, i is a free parameter of the resulting distribution function. As a consequence of the isotropy of the bond directions, the probability à\V that any vector ends in the interval between k and k+ dk is equal to the product of the independent probabilities that the components of the vector with reference to an arbitrary set of basic vectors end in the corresponding intervals of the components.

where kf are the components of the vector k

Differentiating Equation (1) with respect to the component k, il^follows that

The integration of Equation (6) yields

The probability W(n) of finding a grain with a coordination number between n and n-f dn independent of the mean bond direction is given by the integration of/?"(«') over all directions.

Γ is the gamma function and ?3 the mean coordination number.

p is defined as the probability that, if a grain with a coordination number $$ n3 = 1 is cut by a section plane, its bond also appears in the section plane. A bond appears in a section plane only if the centre of the bond-disk falls into a band of width $$b whose centre line is identical with the intersecting line of the section plane with the grain (Fig. 2). The bond areas are assumed to be random and isotropically distributed on the grain surface. They are also considered to be small compared to the grain surface area as well as compared to the bond area. From these conditions it follows that the probability Pik of finding simultaneously / bonds of a grain with a coordination number k in the above-defined band is

If the subscript k is summed from unity to 12 $$(«s = 12 corresponds to the coordination number in a close-packed structure of balls) we get the density distribution of the number of bonds per grain cut by a section plane f2(l) : 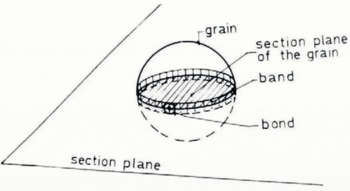 Fig. 2. Sketch of a grain cut by a section plane.

Estimation of the Probability p

The specific grain surface area (area per unit volume) is independent of the grain shape (Underwood, 1970)

The number of grains per unit volume $$ Λ? depends on the grain shape (Underwood, 1970)

where C" is a function of the shape of the grains.

Therefore 1% is given by

The mean band width $$b can be deduced from the mean intersection length of the bonds $$J2 and the corresponding mean bond-disk radius:

The mean three-dimensional radius of the grain bonds $$f-, is given by the harmonic mean of the length of the lines representing grain bonds in the section plane $$d2 (Underwood, 1970)

where (Ed~2) is a function of the assymetric density distribution of the measured $$dz.

From the measurements, the value of the square root in Equation (23) is

The probability p is

Estimation of the Mean Length of the Basic Chains

We assume that in medium-density snow the end grains are randomly distributed on all free bonds of grains with $$n3 ^ 2. The probability that any bond of a grain with$$ n3 5= 2$$ leads to an end grain is :

The probability that a grain has two effective bonds is

For the probability to find a chain composed of k chain-grains we get approximately: 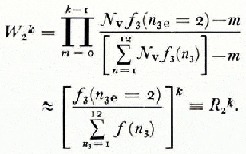 Therefore the mean number of grains per chain is

with a variance of

The specific number of grains is

To be able to investigate the correlations between the structural parameters denned above and the strength of the fundamental structures, a reduced strength index <rE for the fundamental units as a function of snow strength has to be defined:

The reasons for this type of normalization are: (i) The ductile strength (Gubler, 1978) is a function of the number of fundamental units per unit area. (2) The correlation between structural parameters and strength should hold independently of the mean bond area.

Evaluation of the Experimental Data

Fourteen data sets of snow samples with densities between 170 kg/m* and 370 kg/m^ and tensile strengths from 6 000 Pa to 220 000 Pa have been evaluated. The relative standard deviation for the tensile strength measurements amounts to 10%. The corresponding values for Pp and P^ are 5%. The relative standard deviations for the bond counts are: Λ??(«2 = o) ; ±20%, VA B(«2 = i) : ±30%, Λ??(«2 = 2) : ±5o%, and Λ??? = 3) : ± κ>?%. A typical histogram of a measurement of the lengths d, of the lines representing bonds in the section planes is given in Figure 3. The mean coordination numbers $$ n3 of the samples and the additional parameter i of the distribution function are determined by the comparison of the measured fractions $$ fz(n2) with the theoretically calculated fractions $$ f2(n2) as a function of$$ «3, 1, and/). The probability p specific to the sample results from Equation (24). The mean correspondance of the calculated and the measured f2(n2) is highest for the function type $$ with ï — 1.5. A typical example for the determination of $$, is given in Figure 4. Figure 5 shows the corresponding distribution function, and Figure 6 part of a section plane. 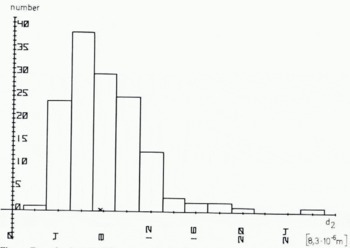 Fig. 3. Example of a typical histogram of the length of lines representing bonds in a section plane. 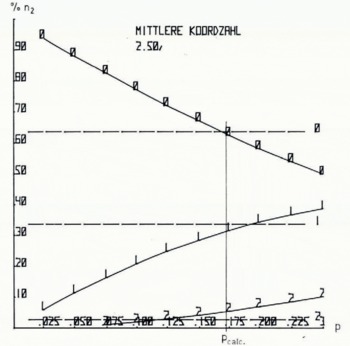 Fig. 4. Example of the determination of n 3, by comparing the measured distributions of the n2 with the corresponding calculated distribution for a given probability p. 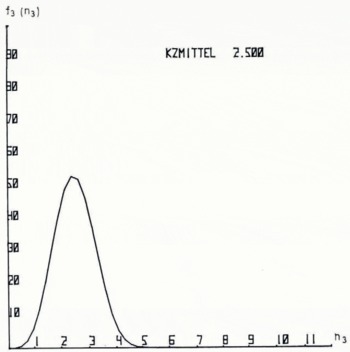 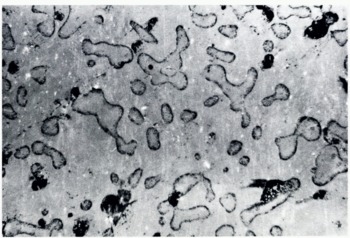 In a first approximation, the correlations are assumed to be linear for the investigated ranges. The resulting correlation coefficients are given in Table I. The corresponding values for the best fits of power functions to the experimental data are given in brackets. 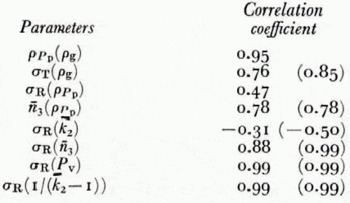 Discussion of the correlations

For these reasons a high correlation between $$ aR and the reciprocal of the effective mean number of grains per chain is expected. 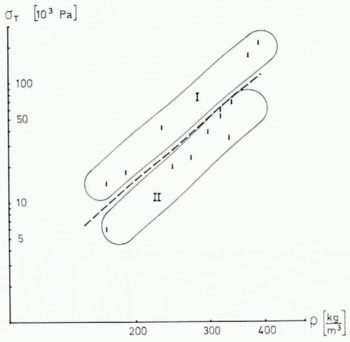 Fig. 7. Measured tensile strength as a function of sample density. 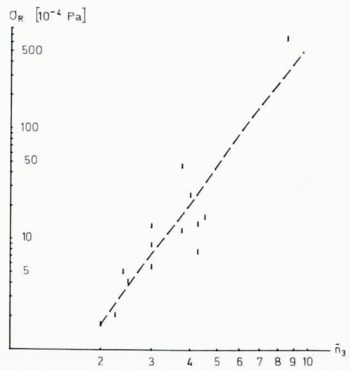 Fig. 8. Strength index πR as a function of the mean coordination number n 3.

The measurements as well as the models do not allow a prediction of the functional dependence, but already simple power functions allow a satisfactory description of a R as a function of Pv and i/(£2— 1) for the measured range of στ.

The experimental data and the power functions are given in Figures 9 and 10. 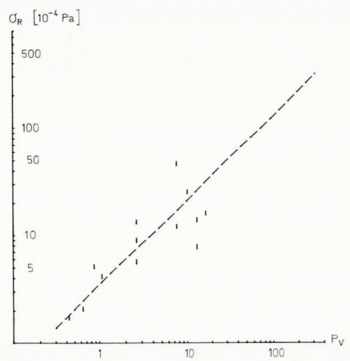 Fig. 9. Strength index σR as a function of the mesh parameter Pv. 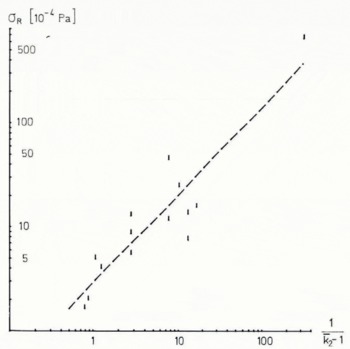 Fig. 10. Strength index as a function of the mean values of the reciprocals of the reduced numbers of grains per chain.

This paper shows that using simple structural parameters instead of the snow density (Fig. 7) results in significantly improved correlations with the tensile strength. For an improvement of the models, new strength measurements at constant stress or strain-rates have to be measured. In an improved model the effects of the stress rate and of the width of the distribution of strength of the fundamental units have also to be considered.

I am indebted to B. Salm, W. Good, O, Buser, and M. de Quervain for valuable discussions.

* The characterization "ductile" is used to describe any type of fracture which is not entirely brittle.