Formulae for calculating temperature profiles in steady-state ice sheets are derived in terms of the horizontal and vertical velocities of the surface ice, and of the variation in surface temperature along the flow lines. Two models are considered: parallel flow and radial flow. In each case the result consists of a “stationary” term (equivalent to Robin's equation), a term dependent on the horizontal velocity, and a term arising from the temperature variations. This last term produces reversals in the temperature field such as are measured in practice.

This analysis was prompted by the need to estimate basal temperatures beneath the ice caps which covered Britain in the last Devensian period, particularly to determine the areas in which melting was likely to occur. Budd and others ([1970]) tackled a similar problem for the Antarctic ice sheet numerically, but this procedure is not always convenient. Robin (1955) gives a formula for the temperature profile in the absence of horizontal velocity variation, which Weertman (1968) modified in an attempt to fit it to the measured temperature profile at Camp Century.

In this paper the problem of heat transfer in moving ice sheets is reconsidered ab initio. In common with other authors the following assumptions are made:

Two basic models are considered. In the first the ice is assumed to be spreading from a central ridge line with stream-lines which are parallel in plan (see Fig. 1.), while in the second (Fig. 2.) the flow diverges uniformly from a central origin.

The first model will be treated in some detail, while the essential features only will be given in the second case. Since these latter results involve confluent hypergeometric functions, which are not normally tabulated, a short table of values is included.

Using X as the horizontal variable in the direction of ice flow and Z as the vertical variable, the heat-convection-diffusion equation is

where K is the thermal diffusivity (36.3 m2/year for ice), T is the temperature, and U and V are the horizontal and vertical velocities respectively.

If the ice thickness is H and the net surface accumulation rate is À, both of which are initially assumed to be independent of X, it follows that U = ÀX|H and V= —ÀZ|H. If we substitute these values into Equation (1) and scale the variables by a factor β so that we use non-dimensional co-ordinates

for which a general solution can be written in the form (Pillow, 1964)

where H n (x) is the nth Hermite polynomial, and ierfc (z) is the nth iterated integral of the complementary error function.*

The constants Â n and B n are found from the boundary conditions. At the base, the ice is heated by the geothermal heat flux and by frictional heating. This yields

where rg is the geothermal heat-flux gradient, rb is the basal shear stress (constant), and k is the ice conductivity. In non-dimensional co-ordinates this becomes

For the upper surface z = β? ( = h, say) we assume initially a constant temperature To.

Applying these boundary conditions to Equation (3) we obtain

The first two terms are the Robin equation, and the sum represents the correction to this to account for the movement of the ice.

While this equation is theoretically valid, it is difficult to use computationally. Some information can, however, be obtained. At the base of the ice sheet the temperature is

which takes the value 1/ τ at x = o and is asymptotic to |X|/ τ1/2 as |X| tends to infinity. This suggests that we can usefully assume that the temperature field is linear in x. This assumption is equivalent to ignoring the effects of horizontal diffusion of heat compared with the horizontal convection of heat. As the above results indicate, this assumption is likely to break down for small x and small h, that is when the convection velocities involved are themselves small. Even so, the difference between the two solutions is negligible. For x = o, h = 2.0, the sum in Equation (5) takes its maximum value of 0.64 when z = 0, so that the discrepancy is at most 0.64 πb K/k≈ 0.015 deg.

In addition to neglecting horizontal diffusion the upper-surface boundary condition will be varied to include a variable surface temperature. In keeping with the linear approximations made above, we assume that the surface temperature is given by T = T 0 +T gX for X > 0, i.e. that T = T0 +Tgx/β for x > 0. We now have the equation

This solution can be reduced to tabulated functions (Abramowitz and Stegun, 1964) by using the formulae

so that Equation (6) becomes

where the first term is again the Robin equation, the second term is the contribution from the velocity field, and the final term arises from the variation in the surface temperature.

Graphs of the expressions in square brackets in Equation (7) for selected values of h are given in Figures 3a. and 4a. 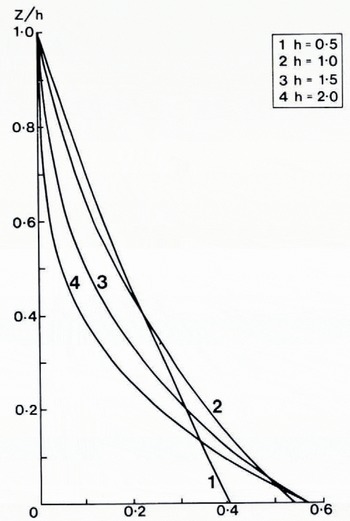 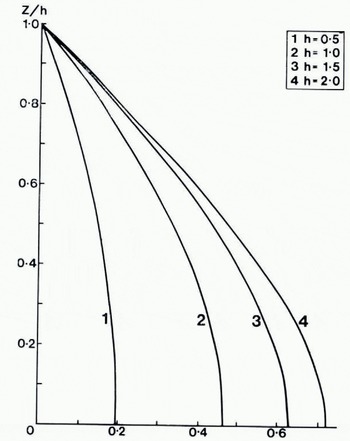 This solution can now be modified to account for variations in net accumulation, surface temperature, and ice thickness.

The factor 2 τbKx/k which comes from the basal temperature gradient is equal to τbU(x)/k β,so that, finally, we have for the temperature field

Note that all these quantities, with the exception of T(0, H(0)), the surface temperature at the centre of the ice field, are local. Hence the temperature profile can be estimated without knowing values for intermediate sites.

If we denote the radial variable by R and the vertical variable by Z and again scale with respect to β =A/2KH, the solution corresponding to Equation (3) is

where γ= βR and Ln is the nth Laguerre polynomial, while that corresponding to Equation (7) is

where ϕ(Z) is the confluent hypergeometric function

A short table of values of φ and ψ is given in the Appendix.

Finally, in terms of the physical quantities we have

Figures 3b. and 4b present graphs of (ψ (h) φ(z)/φ(h)—ψ(z)) and (ι—φ(z)/φ(h)) for the same values of h as used in Figures 3a. and 4a. The graphs in Figure 3 represent the effects of heating due to the motion of the ice. It will be seen that there is more heating in the case of radial flow than in that of parallel flow and that the heat penetrates further into the ice. This is because, for a fixed accumulation rate, the ice must travel twice as far in the radial case as in the parallel case to reach the same velocity. Hence both frictional heating and penetration are enhanced in this case. 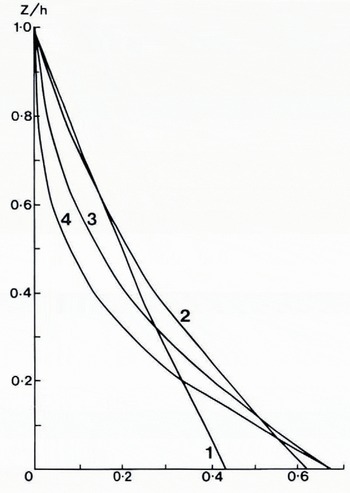 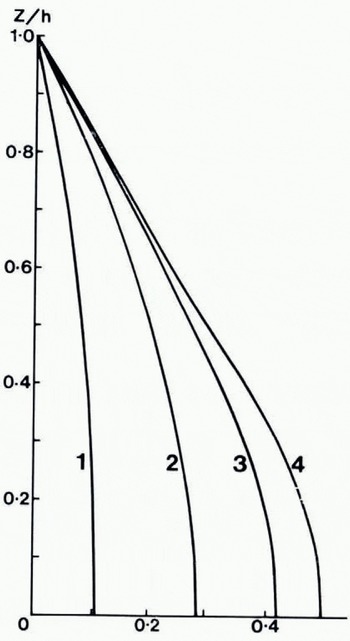 On the other hand, Figure 4 shows that the radial flow is less sensitive to temperature variations than the parallel flow. This is to be expected since the amount of ice at the local temperature is proportional to the distance from the origin in the radial case but is constant in the parallel case.

Applying the formula for the case of parallel flow to the “Byrd” bore hole, very good agreement between the theoretical and actual temperature profiles is obtained using À = 0.30 m/year, u = 29 m/year, and T(o, H(o)) = — 3O.7C, as can be seen from Figure 6. It should be noted however that these values for the parameters were arrived at in an ad hoc fashion since the author has been unable to obtain the correct figures. 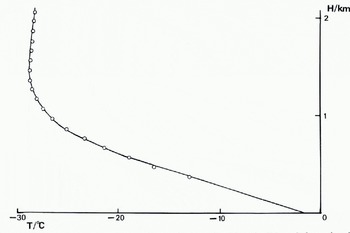 While the approximations derived in this paper are not universally applicable, they should prove useful in many cases where an estimate of the temperature field of an ice sheet is required.

The formulae have already been used by Boulton and others (1977) to estimate bedrock temperatures and regions of basal melting under the Quaternary British ice sheet, and these estimates seem to agree with the features measured in the field.

* There are various notations for this function. Its properties are listed by Pillow (1964) and also by Abramowitz and Stegun (1964) and by Magnus and others (1966).