The ‘Advocating Classics Education’ (ACE) project is an initiative led by Professor Edith Hall and Dr Arlene Holmes-Henderson, based at King's College London. The project seeks to extend the availability of Classical Civilisation and Ancient History (CC/AH) qualifications to learners in non-fee-paying schools across the United Kingdom. To do so, Professor Hall has been awarded a Leadership Fellowship of £250,000 from the Arts and Humanities Research Council (AHRC). The project's full title is ‘Studying Classical Civilisation in Britain: recording the past and fostering the future’ and it runs from 1st May 2017 to 31st August 2018.

The ‘Advocating Classics Education’ (ACE) project is an initiative led by Professor Edith Hall and Dr Arlene Holmes-Henderson, based at King's College London. The project seeks to extend the availability of Classical Civilisation and Ancient History (CC/AH) qualifications to learners in non-fee-paying schools across the United Kingdom. To do so, Professor Hall has been awarded a Leadership Fellowship of £250,000 from the Arts and Humanities Research Council (AHRC). The project's full title is ‘Studying Classical Civilisation in Britain: recording the past and fostering the future’ and it runs from 1st May 2017 to 31st August 2018.

Far too few British children are educated about the ancient Greeks and Romans at secondary level. Studying ancient Greek and Roman civilisation, history, thought, literature, art and archaeology is not only exciting and instructive, but confers profound advantages: it hones analytical and critical skills, trains minds in the comparative use of different types of evidence, introduces young people to the finest oratory and skills in argumentation and communication, enhances cultural literacy, refines consciousness of cultural difference and relativism, fosters awareness of a three-millennia long past, along with models and ideals of democracy, and develops identities founded in citizenship on the national, European and cosmopolitan, global level.

Unfortunately, qualifications at GCSE and A or AS Level in Latin and Ancient Greek languages are rarely available outside the private education sector (Lister, Reference Lister2007; Hunt, Reference Hunt2016). There is, however, a financially feasible solution for state sector students: the introduction of courses leading up to qualifications in Classical Civilisation or Ancient History. Between three and four thousand teenagers currently sit A Level in the state sector in these subjects, but these numbers could be substantially increased since (in most parts of the U.K.), both Classical Civilisation and Ancient History can be taught by any teacher, of any subject, currently employed in a school or sixth form college and in possession of qualified teacher status, enthusiasm to teach the ancient world, and sufficient support.

These subjects prove extremely popular and successful wherever they are introduced (Khan-Evans, forthcoming Reference Khan-Evans, Holmes-Henderson, Hunt and Musié2018; Watson, Reference Watson2013). But they are poorly understood even by academic Classicists (Goodman, Reference Goodman2017), let alone the general public. There is no fully comprehensive study of their history: the canonical account (Stray, Reference Stray1998) of classical education in British schools ends its survey in 1960, which was almost exactly the moment when Classical Civilisation began to be introduced in a relatively large number of schools. Hunt (Reference Hunt2013) provided a more recent, relatively brief, overview. The ACE project will remedy the absence of an authoritative history of the teaching of these subjects in schools and sixth form colleges, and of a description of what they entail, by producing as its major output a

60,000-word book, available freely online, jointly written by the Fellow (an expert in Classics in Britain beyond the elite) and the Research Fellow (an expert in contemporary Classical pedagogy). The research element of the project addresses two fundamental questions: it asks (1) what is the history of the study of CC and AH at secondary level in British schools? and (2) what are the skills and intellectual competencies conferred upon students who take such courses? The fundamental evidence they will examine consists of all the printed documentation relating to qualifications in these subjects issued historically by examination boards, and the results of a questionnaire distributed to as many individuals as possible who have experience of Classical Civilisation or Ancient History courses at secondary level at any time now or in the past.

Aims of the ACE project

The Leadership Fellow and the Research Fellow will engage directly with teachers, schools and the public in a series of events designed to maximise dialogue that will feed into the research and public impact across the British Isles - in Scotland, Wales and Northern Ireland as well as in 12 English regional centres. The goals are to introduce or support the teaching of Classical subjects in new schools or sixth form colleges, to raise their public profile and initiate a public debate about their value and sustainability, and to influence educational policy, especially by getting Classical Civilisation accepted alongside Ancient History as a core Humanities subject on the English Baccalaureate. A template letter will be available on the project website for members of the public to use to lobby their MP to provide 1) equal recognition for Classical Civilisation (alongside History, Geography and Ancient History) and 2) additional funding for the learning/teaching of Classical subjects in non-fee-paying schools. 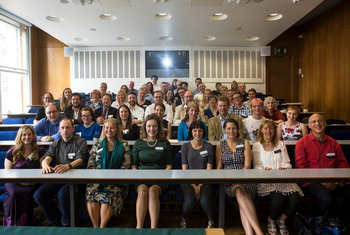 Delegates at the ACE Opening Conference: Arlene Holmes-Henderson and Edith Hall both front row, 3rd and 4th from the left.

At the policy level, Professor Hall and Dr Holmes-Henderson will meet representatives from the Education departments in each of the four nations to raise the profile of the study of the Classical world as an important element of 21st century education. Meetings with the five exam boards offering accreditation in Classical subjects will ensure that qualification bodies contribute to discussions affecting policy and practice.

The project's website will create a permanent hub for discussion, sharing and dissemination of news, information, ideas and resources which further the project's objectives amongst stakeholders. These include not only official project patrons and partners, but teachers in schools, sixth form colleges and other universities, related charities, study groups and subject associations.

Short promotional films featuring the researchers, project partners, patrons, teachers and students will be used to advocate the policy goals of the project. Filming has begun and these will be posted on the website in due course.

The project has six patrons. Professor Paul Cartledge, Professor Malcolm Schofield, Professor Greg Woolf, Dr Emma Bridges, Natalie Haynes and Charlotte Higgins. Their biographies can be read at aceclassics.org.uk. Collaborators include: the Classical Association, the Society for the Promotion of Roman Studies, the Society for the Promotion of Hellenic Studies, the Historical Association, Classics for All, the Institute for Classical Studies, Euroclassica, the Council of University Classics Departments, the Women's Classical Committee, Cambridge School Classics Project, Association for Citizenship Teaching, OCR, International Baccalaureate and Eduqas.

Each partner university will host one high-profile public event in 2017-2018 and academic staff will support schools in their region to introduce and develop the teaching of CC/AH. Each event will feature a range of activities and talks including: (i) a talk by an invited ‘celebrity classicist’, whose appearance will maximise publicity in local news media; (ii) a ‘Question Time’-type panel debate including local teachers and pupils answering questions posed by the public; (iii) discussion led by the Research Fellow of the subject-specific and transferable skills and intellectual value of such studies; (iv) an illustrated presentation by the Fellow illustrating how people have been inspired by classical culture locally, using historical examples since the 18th century (evidence here will be drawn from her now completed research into regional classical education, entertainment, art and architecture already amassed in the course of her AHRC-funded project ‘Classics & Class in Britain 1789-1917’).

Following the regional event, each partner institution will provide ongoing support to local schools including helping teachers secure curricular space for CC/AH and by providing professional mentoring (which might include enhancing subject knowledge, or visiting schools to observe and/or team teach). The national charity Classics for All will help coordinate this follow-up, and will provide funding to help non-fee-paying schools establish the teaching of Classical subjects.

Full details of ACE partner events are available on the website but those confirmed to date include: 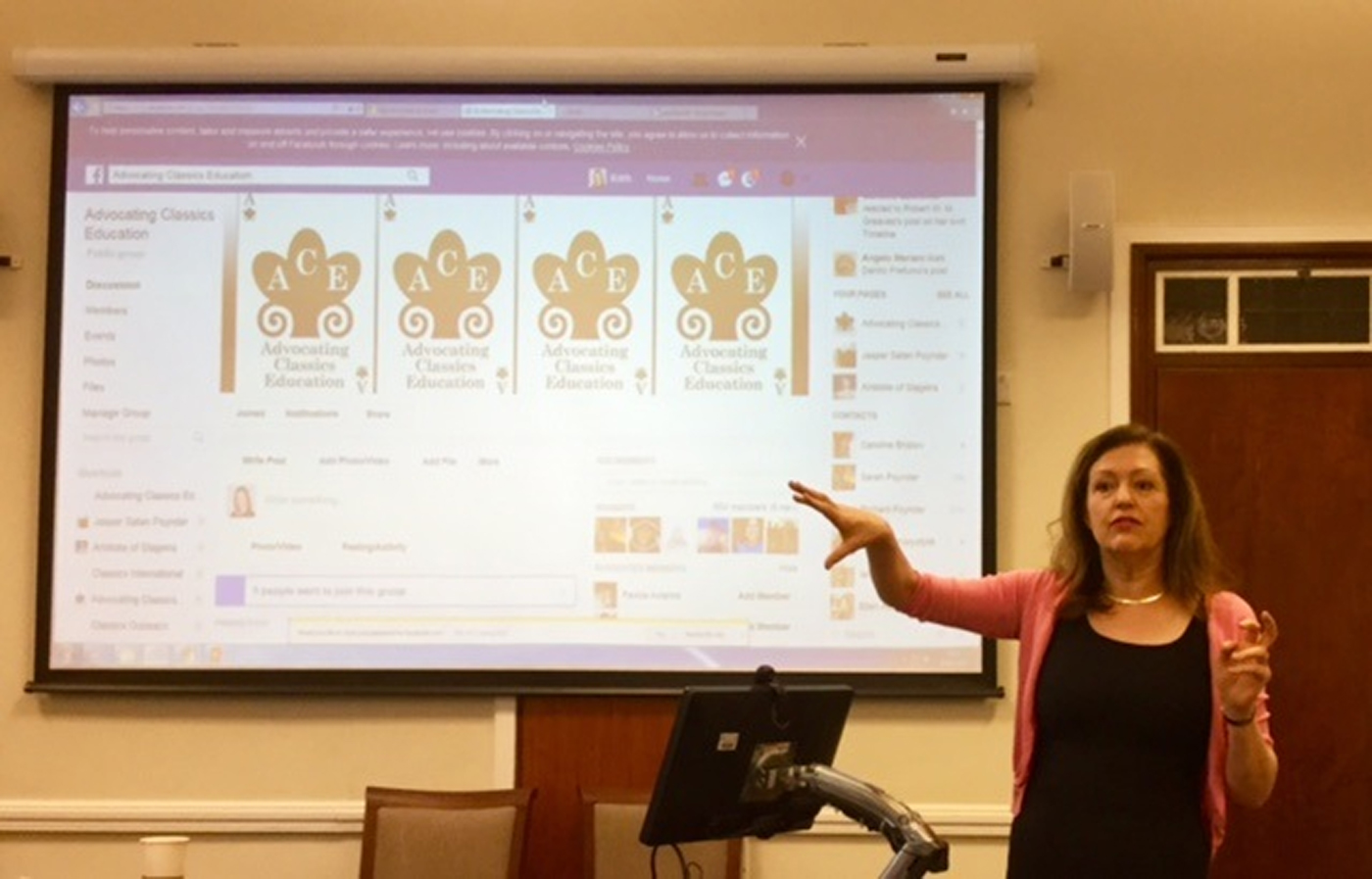 Professor Hall has been invited to deliver the keynote address to the Historical Association conference in May 2018, and Dr Holmes-Henderson will facilitate a workshop for teachers. By attending the Historical Association's conference, they will establish direct channels of communication with existing teachers of History in primary and secondary schools. As all children in England and Wales learn about the Greeks and Romans in the Key Stage 2 History Curriculum, this project is well-placed to support and improve continuity of learning across transitional phases. Events such as this provide an ideal forum in which the project team can share information about the syllabus content and assessment criteria of CC/AH courses, and answer any questions History teachers may have. Further direct engagement with teachers (of Religious Education, Philosophy, English, Drama and Citizenship) is planned via our subject association collaborators.

How to engage with ACE?

The Project has its own Twitter account @classcivanchist where project events, images and updates are recorded. Activities are also recorded on the ACE Facebook group https://www.facebook.com/groups/1403604912993457/ which provides a forum for teachers, policy makers and exam board representatives to discuss key issues facing the future of CC/AH in classrooms.

The ACE website has a blog which showcases updates from our 16 university partners, as well as features based on meetings with collaborators. There is also a ‘contact us’ facility, which allows members of the public to share information with the research team and to volunteer their help in various ways. The project email address is ace@kcl.ac.uk

An important tool for data collection is a survey on Classics education. If you were educated in the UK (whether your school offered Classics or not) please complete this (and share the link widely): https://www.surveymonkey.co.uk/r/WTDM76R