Wars among Savages: Homicide and Ethnicity in the Victorian United Kingdom 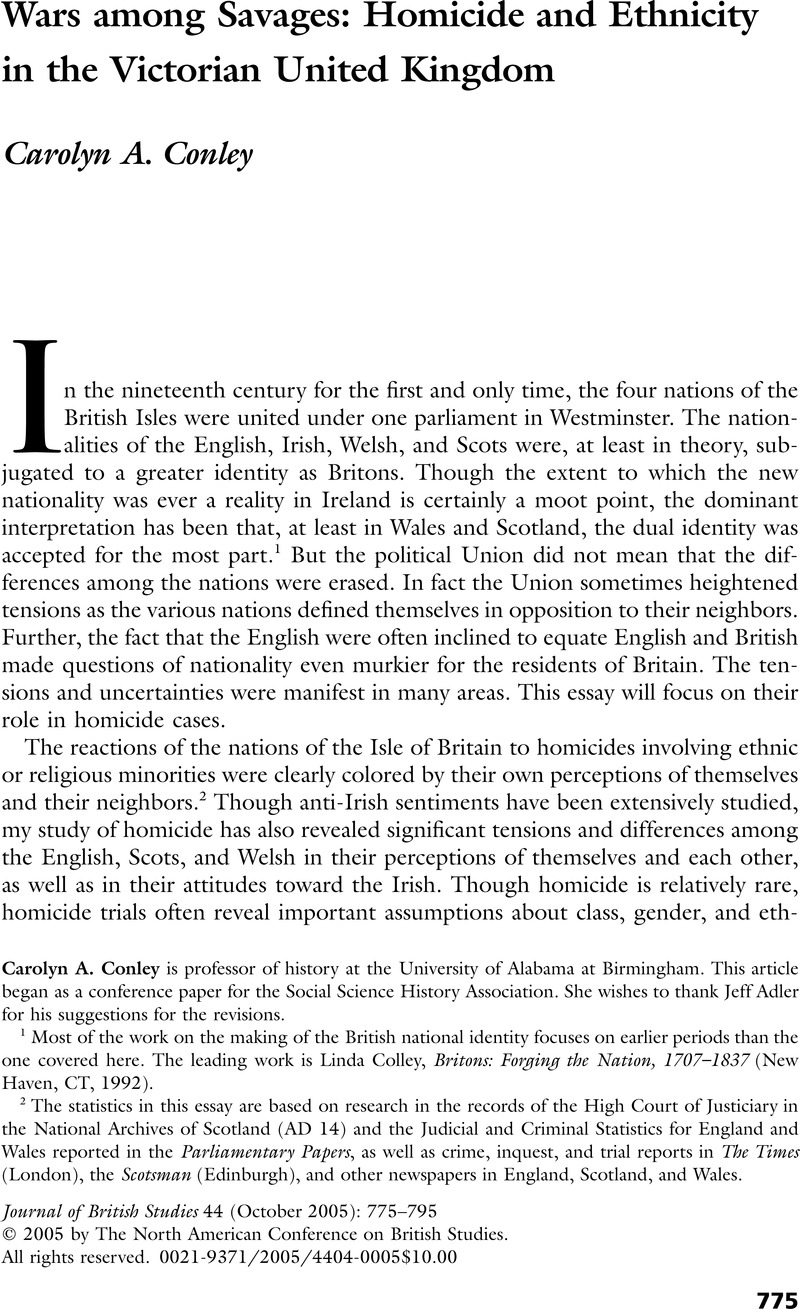 1 Most of the work on the making of the British national identity focuses on earlier periods than the one covered here. The leading work is Colley, Linda, Britons: Forging the Nation, 1707–1837 (New Haven, CT, 1992).

2 The statistics in this essay are based on research in the records of the High Court of Justiciary in the National Archives of Scotland (AD 14) and the Judicial and Criminal Statistics for England and Wales reported in the Parliamentary Papers, as well as crime, inquest, and trial reports in The Times (London), the Scotsman (Edinburgh), and other newspapers in England, Scotland, and Wales.

7 On this point in another context, see Weiner, Martin, “The Sad Story of George Hall: Adultery, Murder and the Politics of Mercy in Mid-Victorian England,” Social History 24 (May 1999): 173–95; and Hall, Catherine, “The Nation Within and Without,” in Defining the Victorian Nation: Class, Race, Gender and the Reform Act of 1867, ed. Hall, Catherine, McClelland, Keith, and Rendall, Jane (Cambridge, 2000).

9 Quoted in The Times, 11 August 1874, 4f. On the idea of the working classes as aliens, also see Philip Dodd, “Englishness and the National Culture,” in Colls and Dodd, Englishness, 8–11.

27 The Times, 28 October 1875, 6a. Regarding Irish immigrants and their relationships with law enforcement in the mid-Victorian period, see Roger Swift, “‘Another Stafford-Street Row’: Law, Order and the Irish in Mid-Victorian Wolverhampton,” in Swift and Gilley, Irish in the Victorian City, 181–206, and “Crime and the Irish in Nineteenth-Century Britain,” in Swift and Gilley, Irish in Britain, 163–82.

34 The Times, 24 May 1871, 12c. The Scots could give as good as they got. The Scotsman observed “the inability of certain classes of Englishmen and especially of Londoners to understand a joke. … The truth is that of all classes of men in the British dominions your genuine Londoner has the least perception of either wit or humour beyond his own narrow circle” (Scotsman, 19 February 1891).

35 Regarding British, English, and Welsh identities and their interworkings, see Ellis, John S., “Reconciling the Celt: British National Identity, Empire, and the 1911 Investiture of the Prince of Wales,” Journal of British Studies 37 (October 1998): 391–418.

39 The Times, 2 July 1868, 5f. Backwardness was not limited to the Celtic fringe. In 1875 Justice Bramwell heard a case from Warwick against James Haywood for the murder of Ann Tenant. “This is a curious case from the fact that it shows that there is a general belief in witchcraft at Long Compton and other villages of South Warwickshire among a certain class of the agrarian population.” The victim was eighty years old and had no quarrel with Haywood, who was a man of “good character.” He saw her walking in the road and ran over and stabbed her three times with a pitchfork because he “was and still is under the impression that there are 15 or 16 witches who live in the village and that Ann Tenant was one of them, and that they had bewitched him and prevented him from doing his work and that being possessed of that delusion it excited him to stab the old woman.” The victim's husband said that Haywood's parents had often complained “that witches would not let the boy alone.” Haywood was considered a madman in the village. Justice Bramwell “never remembered a sadder case than seeing a half-witted man stand charged with the murder of a poor inoffensive old woman, whom he had killed under an impulse arising from a belief in witchcraft which would be discreditable to a set of savages.” Haywood was found insane (The Times, 17 December 1875).

56 On the general decline in homicides, see Gatrell, V. A. C., “The Decline of Theft and Violence in Victorian and Edwardian England,” in Crime and the Law: The Social History of Crime in Western Europe since 1500, ed. Gatrell, V. A. C., Lenman, Bruce, and Parker, Geoffrey (London, 1980); and more recently, Weiner, Men of Blood. On the reduction in ethnic violence see Swift, “Crime and the Irish.”

57 In his study of youth gangs in Manchester in the late nineteenth century, Andrew Davies noted that ethnic rivalries were not part of gang definitions. Davies, Andrew, “Youth Gangs, Masculinity and Violence in Late Victorian Manchester and Salford,” Journal of Social History 32, no. 2 (Winter 1998): 352. Pieter Spierenburg has suggested that studies of collective fights in America have focused on ethnicity rather than honor. Spierenburg, Pieter, ed., Men and Violence: Gender, Honor; and Rituals in Modern Europe and America, (Columbus, OH, 1998), 99. The distinction may be overstated, as honor and ethnic bonds would seem to be closely linked. Regarding multidimensional violence, see Crenshaw, Kimberle, “Mapping the Margins: Intersectionality, Identity Politics, and Violence against Women of Color,” Stanford Law Review 43 (July 1991): 1241–99.

59 Swift, “Stafford Street Row,” 199. For a variety of perspectives on the assimilation of the Irish in late Victorian Britain, see Swift and Gilley, Irish in Britain.

87 Carmarthen Weekly Reporter, 26 February 1870. The Scots were more sympathetic to the Welsh than the Irish, noting that “the Welsh farmer though Celtic to the core, is unlike his Irish kinsman in that he prefers honest work to agitation; he is industrious and frugal almost to a fault, and would willingly if he were left alone, return to the peaceful cultivation of his farm” (Scotsman, 30 May 1888).

94 The Times, 18 December 1874, 9f; also see Colls and Dodd, Englishness, 3–19. For a discussion of ethnicity, race, and character in a slightly earlier time period, see Hall, McClelland, and Rendall, Defining the Victorian Nation.

Wars among Savages: Homicide and Ethnicity in the Victorian United Kingdom